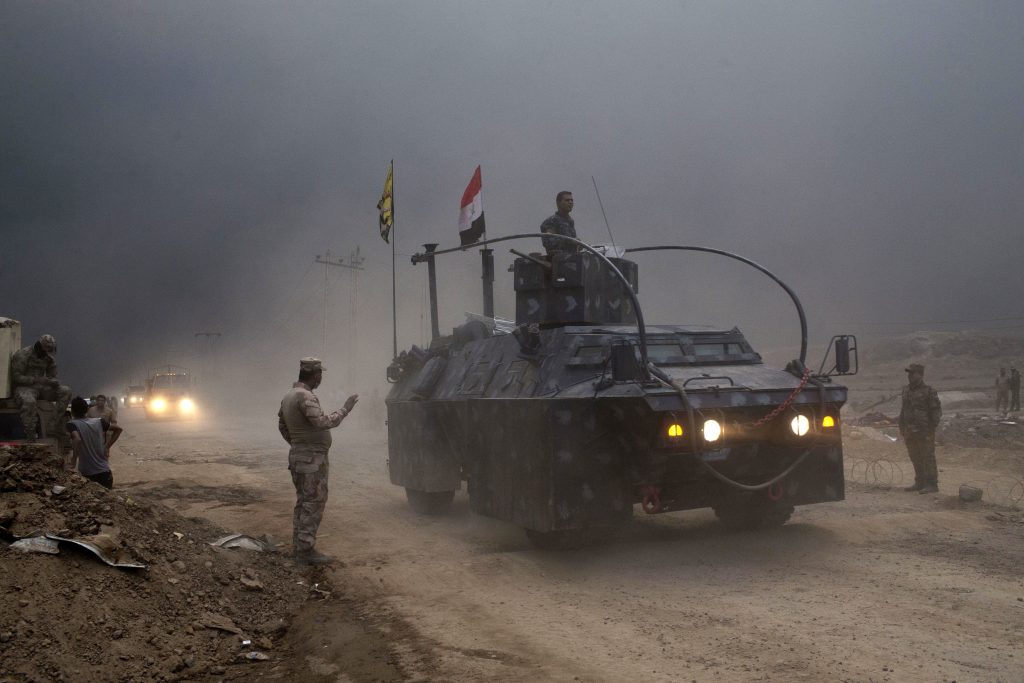 The U.S.-backed Iraqi offensive to take back Mosul from the Islamic State terror group gained fresh momentum on Thursday, with an armored division trying to advance into the city from the northern side.

The terrorists are now besieged in the northwestern corner of Mosul, which includes the historic Old City center and the medieval Grand al-Nuri Mosque and its landmark leaning minaret where their black flag has been flying since June 2014.

The Iraqi army’s 9th Armored Division and the Rapid Response units of the Interior Ministry have opened a new front in the northwest of the city, according to an Iraqi military statement.

The attack will help the elite Counter-Terrorism Service (CTS) and Interior Ministry Federal Police troops who are painstakingly advancing from the south.

“Our forces are making a steady advance in the first hours of the offensive and Daesh fighters are breaking and retreating,” Brigadier General Yahya Rasool, a spokesman for the joint operations command, told state media.

A U.S.-led international coalition is providing key air and ground support to the offensive on Mosul, Islamic State’s de facto capital in Iraq, which started in October. It was from the pulpit of the Grand al-Nuri Mosque that Islamic State leader Abu Bakr al-Baghdadi revealed himself to the world in July 2014, declaring a “caliphate” that spanned parts of Syria and persecuted non-Sunni communities as well as Sunnis who did not abide by its extreme interpretation of Islam.

“An armored division should not be going into narrow alleyways and streets but we will,” Lieutenant General Qassem al-Maliki, commander of the 9th Armored Division, told Reuters.

“There are sometimes troop shortages or orders that require us to do so and we will do our duty,” he told Reuters in an interview at a base southwest of Mosul.

The Iraqi army said on April 30 that it aimed to finish the battle for Mosul, the largest city to have fallen under Islamic State control in both Iraq and Syria, this month.

Islamic State’s defeat in Mosul will not mean the end of the hard-line Sunni group which remains in control of parts of Syria and vast swathes of Iraqi territory near the Syrian border.

Close U.S. support should help the involvement of the armored division and reduce the risk for civilians, U.S. Army Lieutenant Colonel James Browning, the partnered adviser to the Iraqi 9th Armored Division, told Reuters at the base.

“Everything I am trying to do is try to shape the battlefield for him,” Browning, a battalion commander from the 82nd Airborne Division, said of Maliki.

“I am looking at trying to strike right in front of him as well as deep, even into Old Mosul.”

U.S. support is essential for getting rid of suicide car bombs, known as VBIEDs, driven by the terrorists as road torpedoes before crashing into troops.

A typical conversation between Browning and Maliki would go like this: “What are you seeing on the screen? Do you see civilians?” Browning recalls Maliki asking.

“And sometimes I say ‘yes’ and he [Maliki)]says, ‘Don’t strike.’ I go through that process every time. We scan, we take a look, we make sure,” Browning said.

The war is taking a heavy toll on civilians trapped behind Islamic State lines and used by the terrorists as shields.

Local officials and eyewitnesses have said as many as 240 people may have died in March in the Al-Jadida district of western Mosul when a blast made a building collapse.

The U.S. military has acknowledged that the U.S.-led coalition probably had a role in the March 17 explosion, but said Islamic State also could be to blame.