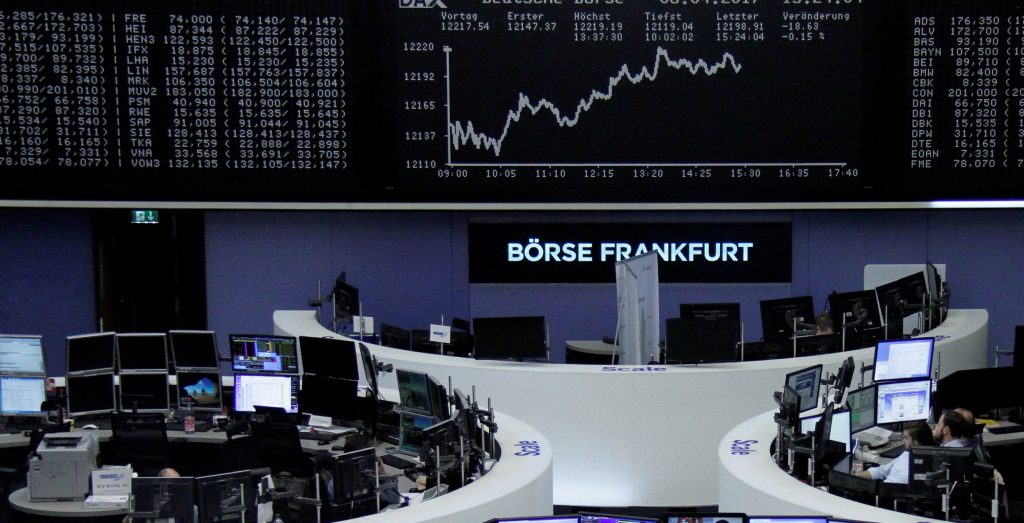 European stocks got a lift Thursday after centrist French presidential candidate Emmanuel Macron was perceived to have gotten the better of the far-right’s Marine Le Pen in a debate, and a survey showed economic growth in the 19-country eurozone striking a six-year high.

A big gainer was the CAC 40 stock index in Paris, which was up 0.7 percent in late morning trading, while Germany’s DAX was not far behind, 0.6 percent higher. The euro was also buoyant, trading up 0.4 percent at $1.0925.

A victory for Macron, who is perceived to be more business-friendly and an advocate of France’s continued use of the euro and membership in the European Union, in Sunday’s election would eliminate a key risk facing the region, according to many in financial markets. Snap polls after the debate had Macron as the clear winner and solidifying his position as the front-runner.

“While Le Pen was widely seen as being better suited to the event, it is Macron that is believed to have fared better in the scathing encounter, helping to protect his substantial lead in the process and ease concerns about a late surge by the National Front leader,” said Craig Erlam, senior market analyst at OANDA.

European markets got a further lift from a survey from financial information company IHS Markit showing the eurozone, and France in particular, picking up momentum at the start of the second quarter and official EU figures showed retail sales across the eurozone up a monthly 0.3 percent in March for the third straight increase.

The survey from IHS Markit was particularly encouraging. The firm said its purchasing managers’ composite output index — a broad gauge of economic activity — rose to 56.8 points in April from 56.4 the previous month. The reading was at its highest level since April 2011 and a tad ahead of the earlier estimate. Anything above 50 indicates expansion.

Chris Williamson, the firm’s chief business economist, said the survey portrays “an economy that is growing at an encouragingly robust pace and that risks are moving from the downside to a more balanced situation.” He said it’s consistent with quarterly growth of 0.7 percent. If sustained through May and June, that would mean a marked pick-up from the 0.5 percent growth recorded in the first quarter.

Economic growth appears to be broad-based across manufacturing and services and across countries. The big two eurozone economies, Germany and France, are growing at around a 0.7-percent rate, Williamson said. Elsewhere, he noted that Spain and Ireland are expanding at an even faster rate and that Italy appears to be heading in the right direction following years of stagnation.

“The encouraging picture from the survey data is likely to help raise many forecasters’ expectations of eurozone economic growth in 2017,” Williamson said.

He also said it will “no doubt add to speculation” that the rhetoric coming out of the European Central Bank (ECB) will “turn increasingly hawkish.”

Market expectations are growing that the ECB could soon start reining in its bond-buying stimulus program, especially if Macron becomes the next French president. The ECB wants first to see a sustained increase in inflation pressures. In April the headline measure of inflation rose to 1.9 percent, bang on the bank’s goal of just below 2 percent. Crucially, though, it appears that the ECB wants to see the core measure, which strips out volatile items such as food and energy, get nearer to that level. In April, it spiked to 1.2 percent, fueling talk that the ECB will soon start changing course.