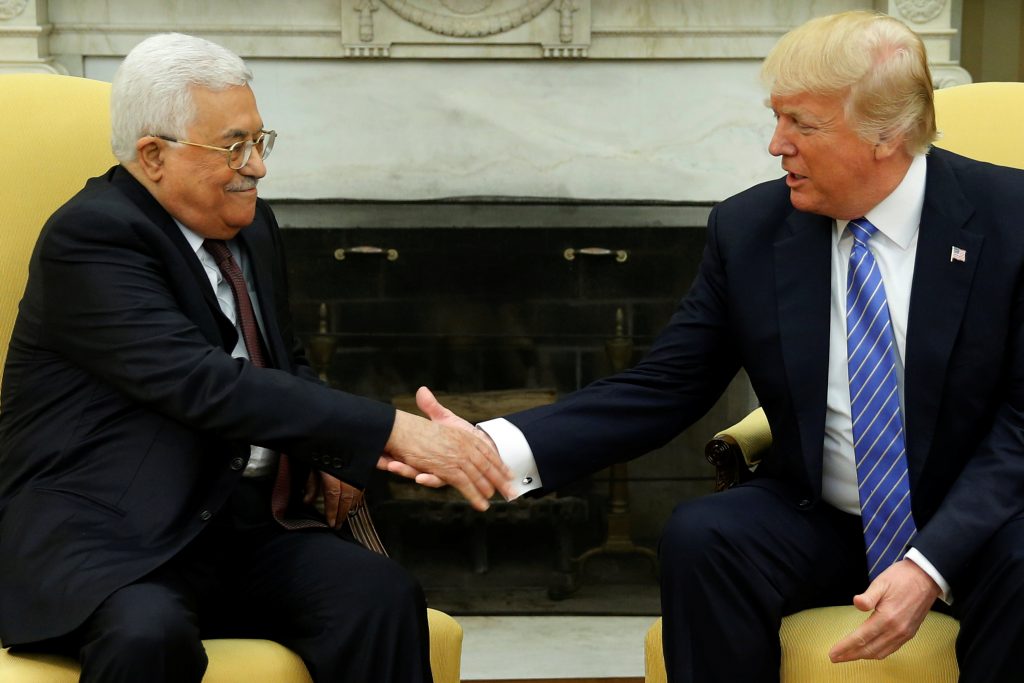 President Donald Trump vowed on Wednesday to work to broker peace between Israel and the Palestinians as he hosted Palestinian President Mahmoud Abbas at the White House but offered no clues about how he could break the deadlock and revive long-stalled negotiations.

In their first face-to-face meeting, President Trump pressed Palestinian leaders to “speak in a unified voice against incitement” to violence against Israelis, but he stopped short of explicitly recommitting his administration to a two-state solution to the decades-old conflict, a longstanding bedrock of U.S. policy.

“We will get this done,” Mr. Trump told Abbas during a joint appearance at the White House, saying he was prepared to act as a mediator, facilitator or arbitrator between the two sides.

Abbas quickly reasserted the goal of a Palestinian state as vital to any rejuvenated peace process, reiterating that it must have its capital in Yerushalayim with borders based on pre-1967 lines. Israel rejects a full return to 1967 borders as a threat to its security.

President Trump faced deep skepticism at home and abroad over his chances for a breakthrough with Abbas, not least because the new U.S. administration has yet to articulate a cohesive strategy for restarting the moribund peace process.

President Trump sparked international criticism at the time when he appeared to back away from support for a two-state solution, saying he would leave it up to the parties themselves to decide. The goal of a Palestinian state living peacefully beside Israel has been the position of successive U.S. administrations and the international community

The meeting with Abbas, the Western-backed head of the Palestinian Authority, was another test of whether Mr. Trump, in office a little more than 100 days, is serious about pursuing what he has called the “ultimate deal” of Israeli-Palestinian peace that eluded his predecessors. “I’ve always heard that perhaps the toughest deal to make is between the Israelis and the Palestinian,” Mr. Trump said on Wednesday. “Let’s see if we can prove them wrong.”

Abbas, speaking through a translator, told Mr. Trump that under “your courageous stewardship and your wisdom, as well as your great negotiations ability,” the Palestinians would be partners seeking a “historic peace treaty.”

The last round of U.S.-brokered peace talks collapsed in 2014.

Abbas said that “it’s about time for Israel to end its occupation of our people and our land” — a reference to Jewish settlement building in Yehuduh and Shomron. Reaffirming his commitment to a two-state solution, he called on Israel to recognize Palestinian statehood just as Palestinians recognize the state of Israel.

Though expectations are low for significant progress; plans are being firmed up for Trump to visit the right-wing Israeli leader in Yerushalayim and possibly Abbas in Palestinian territory , targeted for May 22-23, according to people familiar with the matter. U.S.; and Israeli officials have declined to confirm the visit.

Abbas, who governs in Yehuduh and Shomron while Hamas militants rule Gaza, was under pressure at home to avoid making major concessions to Trump, especially with an ongoing hunger strike by hundreds of Palestinian prisoners held by Israel.

Palestinian officials say it will be hard for Abbas to return to the negotiating table without a long-standing pre-condition of a freeze on Jewish settlement expansion on land Israel occupied in 1967, which Palestinians want for a state.

President Trump’s pro-Israel rhetoric during the 2016 election campaign raised concern among Palestinians about whether their leaders will get a fair hearing.

Mr. Trump’s promise to move the U.S. Embassy to Yerushalayim from Tel Aviv, strongly opposed by Palestinians, has been shifted to the back burner, and he has asked Netanyahu to put unspecified limits on settlement activity.