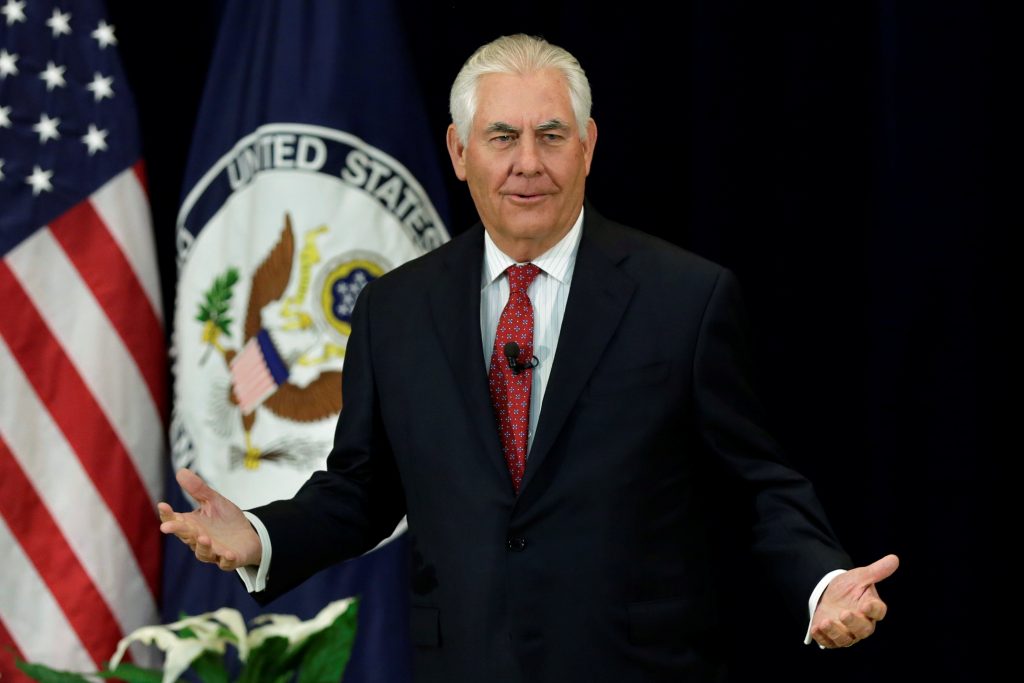 Translating “America First” into diplomatic policy, Secretary of State Rex Tillerson on Wednesday declared the United States would no longer condition its foreign relationships on countries adopting U.S. values like human rights. He spoke to a State Department eager for answers about changing priorities and a sweeping, impending overhaul.

Tillerson did not provide employees any details about the 2,300 jobs he plans to eliminate or how his proposed cut of roughly a quarter of the State Department budget might affect operations. Acknowledging widespread unease about the forthcoming changes, he pledged that diplomats would emerge from the agency’s changes with “a much more satisfying, fulfilling career.”

Yet even as he left key administrative questions unanswered, Tillerson offered the most extensive presentation to date of what President Donald Trump’s “America First” mantra, adopted during the campaign and carried into the White House, means for America’s relations around the world. Over the last two decades, he said, Washington had “lost track” of whether post-Cold War alliances were still serving U.S. interests.

“These are really important alliances, but we’ve got to bring them back into balance,” Tillerson told a standing-room-only crowd in a State Department auditorium.

The former Exxon Mobil CEO distinguished between U.S. “values” and “policies” that he said would drive his strategy. Policies can and must change, he said, while the challenge for diplomats is identifying how to best represent U.S. values. For America’s national security, he added, policies won’t necessarily be contingent on values.

Rights groups and lawmakers from both parties have raised concerns about the Trump administration deemphasizing human rights, pointing to Trump’s warm interactions with leaders of nations like the Philippines and Egypt, which have experienced democratic backsliding in recent years. Tillerson’s remarks reinforced the notion that under Trump, the U.S. is willing to cut deals and cooperate closely with governments failing to improve their rights records.

Still, he insisted the U.S. would not “leave those values on the sidelines.”

Speaking without notes while pacing onstage, Tillerson took diplomats on a rhetorical tour of global hotspots, laying out the various elements of his diplomatic efforts to date:

— On Russia, Tillerson said “there’s almost no trust” between the world’s greatest nuclear powers, but that the administration was trying to rebuild trust by looking at one issue at a time. First up is Syria, as Washington and Moscow see if they can get a cease-fire that can hold.

— On America’s two closest neighbors, he said Mexico and Canada are “ready to engage in a good-faith effort” to update their trade relationships with America, alluding to Trump’s insistence that the North America Free Trade Agreement be renegotiated or canceled. He said ties with both aren’t “as rocky as it looks sometimes.”

— In Asia, he said the U.S. has prepared new sanctions on North Korea. He said the U.S. will take action against countries failing to fully implement existing United Nations penalties on doing business with Pyongyang. He said the administration is taking a new look at relations with China and next month would hold the first session of a diplomatic and security dialogue with senior Chinese officials.

Tillerson’s address came as he prepares a massive reorganization and downsizing that has fueled Democratic and Republican fears that the Trump administration is relegating the importance of aid and diplomacy. Even as Tillerson proposes a 26 percent cut to the budget, Trump is pressing for a major funding boost to the Pentagon and has already secured billions of dollars in new military funding from Congress.

Tillerson said there was “nothing easy” about what he is trying to do, conceding that the overhaul would present major disruptions for diplomats and their families who serve in posts worldwide. He asked employees to provide input — through a survey and other methods — to help shape the agency’s future direction. The State Department employs about 75,000 people globally.

“I can promise you that when this is all done, you’re going to have a much more satisfying, fulfilling career,” Tillerson said. “Because you’re going to feel better about what you’re doing.”