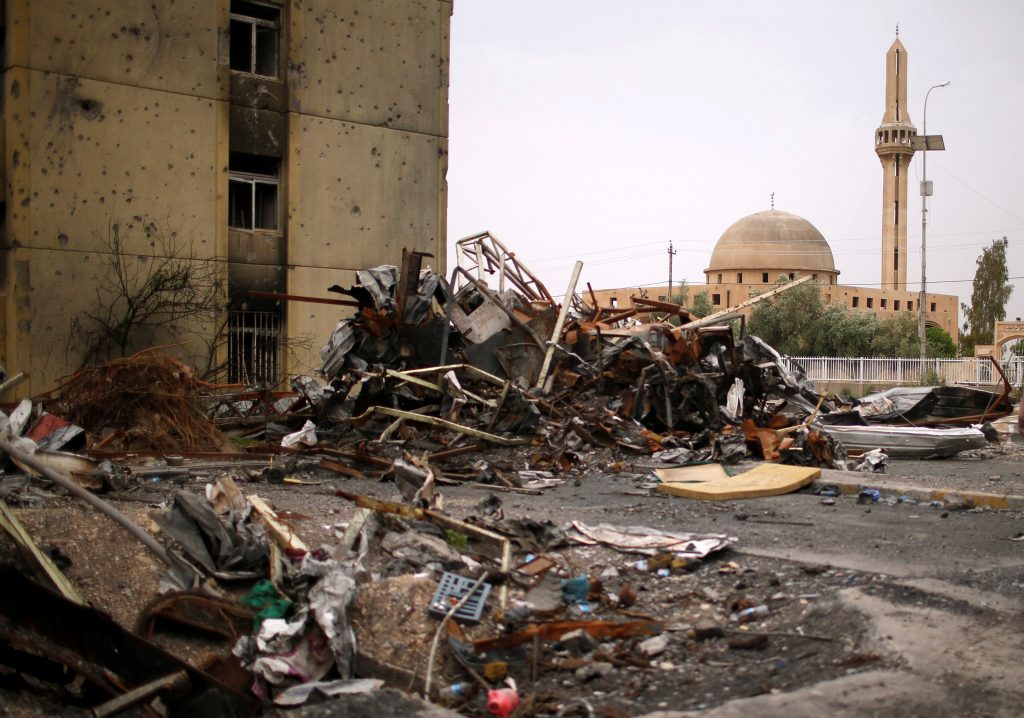 Mosul’s wrecked roads, bridges and broader economy will take at least five years to repair and need billions of dollars of development that Iraq’s government will struggle to afford, officials returning to the battle-scarred city said.

The airport, railway station and university were all destroyed in the long fight to dislodge Islamic State militants from their main Iraqi stronghold.

Iraqi government forces backed by a U.S.-led coalition have now retaken the eastern half of the city — letting regional councillors return for the first time in 2-1/2 years to survey the damage.

“After Mosul is fully liberated, we need a working plan to restore things to the way they were before 2014 when Islamic State took over,” Noureldin Qablan, deputy chairman of the council covering the surrounding Nineveh province, told Reuters.

He sat back in his office in the heart of Mosul, the province’s regional capital, an unremarkable building apart from its new concrete fortifications and the teams of armed guards surrounding it.

A gun lay on his desk, next to his phone and piles of paperwork.

Outside, bustling markets have sprung back into life on the eastern banks of the Tigris river. Over on the other side of the river, Islamic State fighters are holed in, defending the densely-populated Old City with snipers and suicide bombers.

At the heart of their territory sits the medieval Grand al-Nuri Mosque and its famous leaning minaret, where Islamic State leader Abu Bakr al-Baghdadi declared his caliphate in July 2014. Experts fear the fragile brick structure could still succumb to the fighting raging around it.

Iraq’s army has said it expects to expel Islamic State from the rest of the city by May.

The 34 Nineveh councillors, who have been meeting in other cities during the occupation, have already started drawing up plans to rebuild Mosul, though they are still were not sure where the money will come from, said Qablan.

For the first six months, local authorities would focus on restoring security, water, electricity and fuel, and on the return of those displaced by the war.

Under the plan, there would then be a two-year period of reconstruction and the initiation of a reconciliation process followed by 30 months focused on attracting investment and developing the economy.

Some of the early repair work could cost as little as $5,000 a house, Qablan said.

But even that would strain budgets that he said were under-funded by the central government in Baghdad.

“Honestly, we are not getting enough support. What has been allocated to Nineveh in 2017 was 52 billion Iraqi dinars ($44.5 million), which is a very small sum for a province this size,” Qablan said.

“In 2013, we were allocated 738 billion dinars, yet after all this destruction we get just 52. It is very hard to reach our goals with this sum, so we are counting on foreign grants.”

Council officials are in talks with the United Nations, international aid groups and friendly states, he said. Italy was already helping rebuild a hospital.

Outside on the eastern side of the river, foreign investment was already flowing back in, in the form of market stalls heaving with Turkish and Iranian fruit and vegetables, replacing the less plentiful Syrian produce that had dominated under Islamic State.

Dozens of men sipped coffee or tea inside The Golden Cafe, looking at their phones and surfing the web — activities that Islamic State had limited to monitored internet centers.

“We are happy and comfortable. Life is good,” said one customer Emad, smoking hookah outside. “I feel out of this world.”