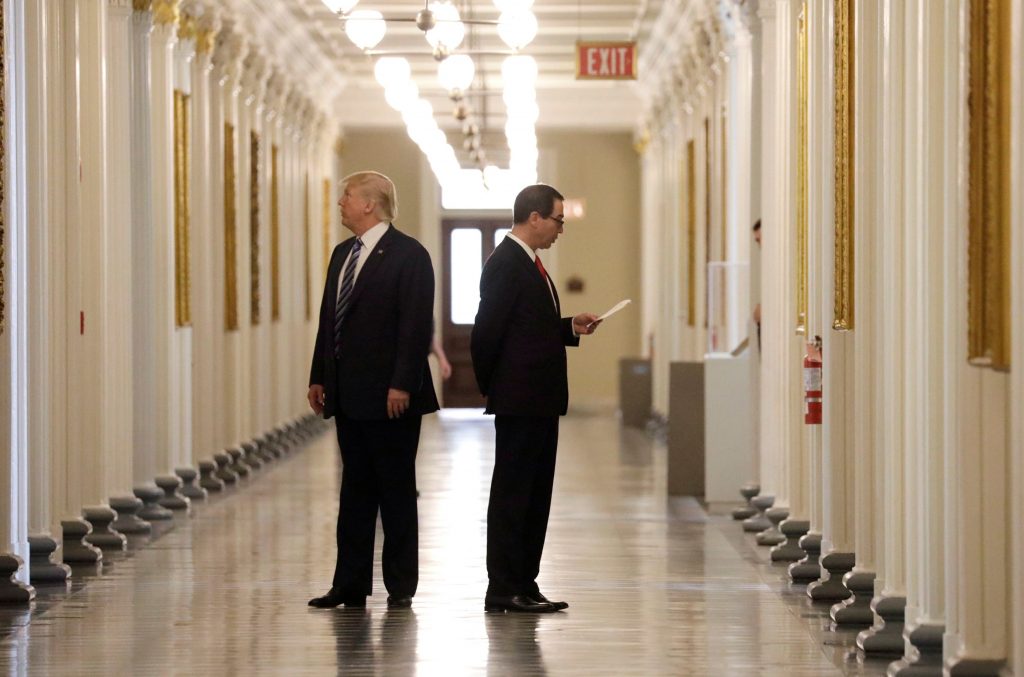 Treasury Secretary Steven Mnuchin named a banking lawyer to run the Office of the Comptroller of the Currency on a temporary basis, removing an Obama administration holdover from one of the U.S.’s top financial regulators.

Simpson Thacher & Bartlett partner Keith Noreika was appointed acting comptroller, the Treasury Department said in a statement Wednesday. The decision means Thomas Curry, who has led the OCC since 2012, will have to leave the agency at the end of the week.

“Keith Noreika has deep experience in helping banks operate in a safe and sound manner, provide fair access to financial services, and provide credit needed for business expansion and job growth,” Mnuchin said in a statement. Noreika is being brought into the agency as “first deputy comptroller” and simultaneously elevated to acting comptroller, according to the statement.

President Donald Trump still has to choose a permanent leader for the OCC, an agency that gets less attention than the Federal Reserve but wields enormous regulatory authority over most of the biggest U.S. banks. Unlike the Fed and the Federal Deposit Insurance Corp., the OCC is run by a single head who can act unilaterally on regulation and supervision. Though potential candidates have been discussed by the Trump administration, the process to nominate a permanent comptroller has been slow.

Curry’s term expired last month, so the administration was free to replace him. His departure is unlikely to be lamented by Wall Street bankers, who faced tougher rules, unprecedented fines and a “heightened standards” regime during his tenure.

“Serving as Comptroller of the Currency has been the highlight of my career,” Curry said in a statement, adding that he’ll be returning home to Boston.

The former Massachusetts state regulator came to the agency when it was beginning to implement Dodd-Frank Act provisions that changed the way big banks do business. Curry also spent much of his time setting up the OCC as a future regulator for financial technology firms, though state regulators have accused him of overstepping his authority in that area.

Bringing in an acting chief from outside the agency is an unusual move, bypassing the vetting and conflict-of-interest reviews that go into naming a formal nominee. But Mnuchin is installing Noreika at the OCC with the designation as first deputy comptroller, making him an instant insider before granting him the role as acting head. It’s unclear how long he will be expected to run the OCC, which is an independent bureau within the Treasury Department.

“It is disturbing that the president is rushing to replace Mr. Curry with an acting appointee who has clear conflicts of interest, and lacks any experience in running such an important agency,” Sen. Sherrod Brown of Ohio, the ranking Democrat on the Banking Committee, said in a statement.

Noreika, who graduated Harvard Law School in 1997, ran his law firm’s financial-regulation practice. The veteran lawyer has spent the bulk of his career representing banks in dealings with regulators such as the OCC. He has also taught banking law.

The Trump administration has slowly begun remaking Wall Street regulators, and Noreika’s appointment adds to the momentum. On Tuesday, the Senate confirmed Jay Clayton, a Sullivan & Cromwell partner who represented banks and hedge funds, to lead the Securities and Exchange Commission.

Still, agency heads picked by Barack Obama will continue to oversee the Fed and the FDIC. Until Trump gets his own picks confirmed, the Obama appointees could stymie efforts to roll back rules.