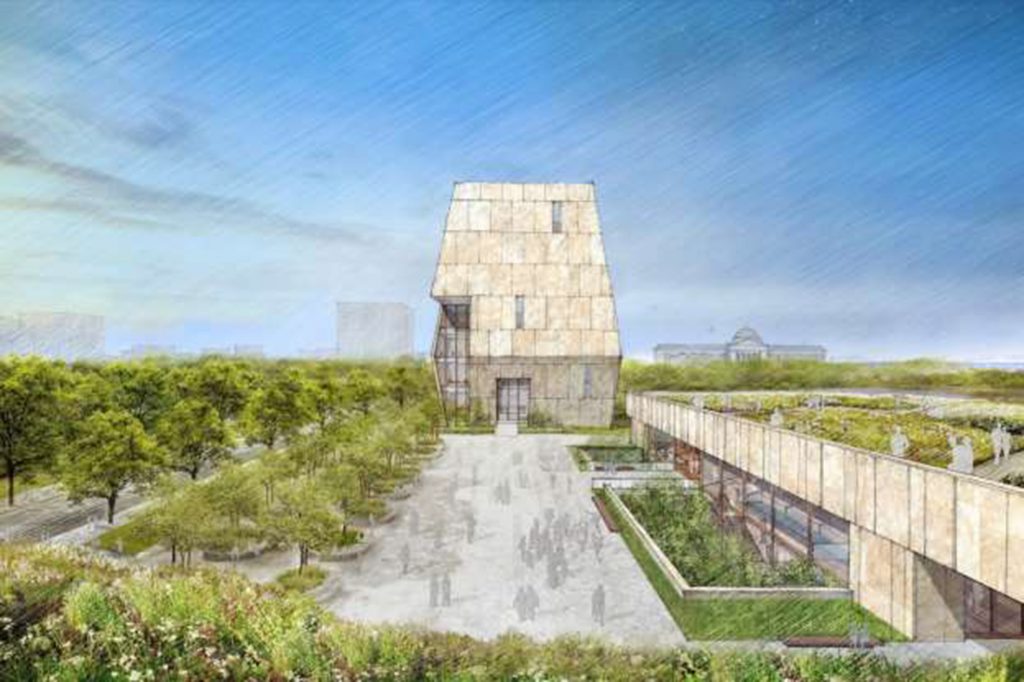 Former first couple Barack and Michelle Obama on Wednesday offered the first look at the design of the planned Obama Presidential Center in Chicago’s Jackson Park — a campus of three buildings highlighted by an eye-catching museum, whose height and splaying walls would make a bold architectural statement.

The museum, which will house exhibition space as well as education and meeting rooms, will be the tallest of the three structures, will be clad in a light-colored stone and will serve as a “lantern” for the complex, though a news release did not specify its height.

To its south would be the forum, which will house an auditorium, restaurant and public garden, and the library, which will contain a trove of documents, emails, photos and artifacts from Obama’s eight years in office.

Pathways will allow visitors to walk from the park to landscaped roofs above the library and forum, which would each be one-story tall. From the roofs, there will be views of Lake Michigan, the Jackson Park lagoon and an outdoor plaza that would connect the three buildings.

The existing athletic field and track will be moved just south, according to the renderings.

The Obama Foundation, the nonprofit in charge of building the center, is touting the building as “a working center for civic engagement and a place to inspire people and communities to create change.”

Initial reaction from one park advocacy organization was positive. “It incorporates the best of the outdoors and the best of the indoors,” said Louise McCurry, president of the Jackson Park Advisory Council. “There’s lots of green space, lots of grass and room for kids to run and to play.”

The design was crafted by Tod Williams and Billie Tsien, the husband-wife New York architects who were scheduled to appear with the Obamas at a South Shore Cultural Center event unveiling the plan.

The news release from the Obama Foundation did not specify the building’s cost. The center is expected to cost at least $500 million. Wednesday’s announcement is likely to kick off a fresh round of fundraising for the center.

The foundation said the three buildings could encompass 200,000 to 225,000 square feet. That would be roughly the same size, or slightly larger, than the George W. Bush Presidential Center in Dallas.

The center will be built in the northwest corner of historic Jackson Park, on a sliver of land just south of the Museum of Science and Industry. The site was selected last summer over Washington Park.

Obama is scheduled to appear Wednesday night at the Chicago Club to address the Civic Committee of the Commercial Club, the same organization that bankrolled Daniel Burnham and Edward Bennett’s 1909 “Plan of Chicago.”