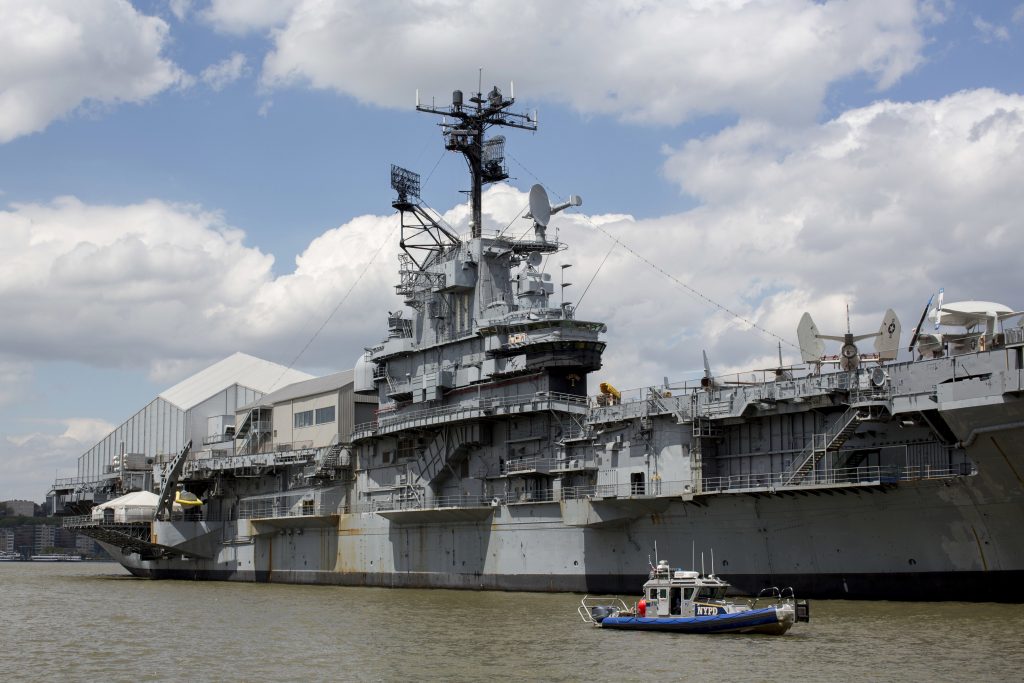 The native New Yorker, whose image for decades was interwoven with his brash hometown, is making his first trip back to Manhattan since taking office, returning Thursday to mark the anniversary of an important World War II battle by making a speech on a decommissioned aircraft carrier docked on the Hudson River.

The Republican president received only 18 percent of the vote in the decidedly liberal city but officials say New Yorkers should still salute the historic nature of his visit.

“Despite political differences from a lot of New York residents, they should appreciate that the president is a born-and-bred New Yorker,” said Joe Borelli, a city councilman and co-chair of Trump’s campaign in New York state.

Hundreds of police will secure Mr. Trump’s USS Intrepid appearance, with more on standby on surrounding blocks. A show of force is already a fixture at his home in Trump Tower, where the Secret Service and heavily armed New York Police Department officers have used barricades, checkpoints and street closings to secure the skyscraper where the president has a penthouse apartment.

Several protests are planned across the city, including near the USS Intrepid and at Trump Tower, threatening to snarl streets and produce images of a city rejecting its famous native son. New Yorkers have protested previous Republican presidents, notably George W. Bush during the 2004 Republican National Convention.

The president is not expected to stay overnight there, but may stop by before spending the weekend at his golf club an hour away in Bedminister, New Jersey. His homecoming is to mark the 75th anniversary of the Battle of the Coral Sea, in which American and Australian forces halted a strategic advance by the Japanese military.

Mr. Trump will deliver a speech on the Intrepid and meet with Prime Minister Malcolm Turnbull of Australia. It will be Trump’s first meeting with Turnbull since they had a contentious phone call in February.

Manhattan was the imposing backdrop as Mr. Trump transformed himself from local real-estate developer to celebrity businessman — skyscrapers and tabloid pages featured his name. During the presidential campaign, he’d fly thousands of miles to sleep in his own bed at Trump Tower, his home for more than 30 years.

But he was last in New York on Jan. 19, the day before he took office. His wife, Melania, and their 11-year-old son, Barron, who attends a private Manhattan school, have remained behind, as have Mr. Trump’s two adult sons, who now run their father’s sprawling business interests.

During the presidential transition, speculation swirled that Mr. Trump, a famed homebody and creature of habit, would return to Manhattan frequently. But he said last week that he has so far stayed away because his trips are “too expensive” and inconvenient.

“I hate to see the New Yorkers with streets closed,” he told Fox News, saying that it was easier and cheaper for the Secret Service to safeguard his clubs in Florida and New Jersey.

Mayor Bill de Blasio, a liberal Democrat and fierce Trump critic, said he has not been invited to participate in the Intrepid event. He criticized the president for turning his back on his hometown.

“I had hoped the divisive rhetoric would end. It has not ended,” the mayor said at a town hall on Monday. “And what he attempted to do was extreme in attempting to undo Obamacare, and attacking this city directly and our interests. It does not suggest common ground.”