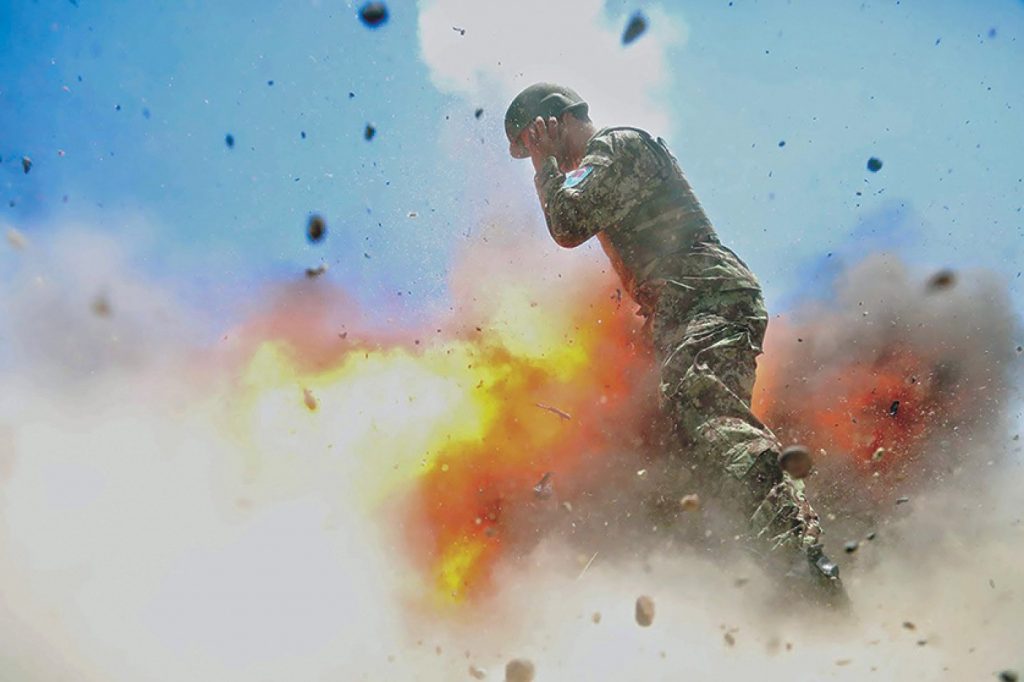 Nearly four years ago, Spec. Hilda Clayton, a combat photographer in the U.S. Army, was documenting a live-fire exercise in Afghanistan when, without warning, a mortar tube accidentally exploded in front of her.

Clayton, 22, was killed in the blast, along with an Afghan military photographer she was training and three Afghan National Army soldiers. Eleven other people were injured.

In the instant before the device detonated, Clayton snapped one last picture. So did her trainee.

On Monday, the Army published the images in its May-June issue of the Military Review, the Army’s professional journal.

Unreleased until now, they offer a haunting view of a soldier’s final moments, capturing the dizzying burst of fire, smoke and debris that claimed the lives of five people.

In a short write-up on the incident, Military Review praised Clayton’s service, saying she died documenting a “critical juncture” of the war in Afghanistan.

“The story was not in the fighting but in the partnership that was necessary between U.S. and Afghan forces to stabilize the Afghan nation,” Military Review wrote.

Clayton was the first combat documentation and production specialist to be killed in Afghanistan, the Army said.

Bill Darley, managing editor of Military Review, told Time that the photos were brought to the journal’s attention by a staff member who served with her.

Clayton’s family approved the release of the photos, as did her unit, Stars and Stripes reported.

Clayton, who was from Augusta, Georgia, had been deployed overseas for less than a year when she died. After graduating from the Defense Information School in July 2012, she was assigned as a visual specialist to the Army’s 55th Signal Co., known as Combat Camera, according to the Augusta Chronicle.

She was attached to the 4th Armored Brigade Combat Team, 1st Cavalry Division, in Afghanistan, where her mission was to document the training of Afghan forces. The brigade is nicknamed “Long Knife.”

In July 2013, Clayton was in Laghman Province in northeastern Afghanistan taking pictures of her American and Afghan counterparts when the mortar exploded. The Army said that the group was conducting a “mortar validation exercise” at Forward Operating Base Gamberi.