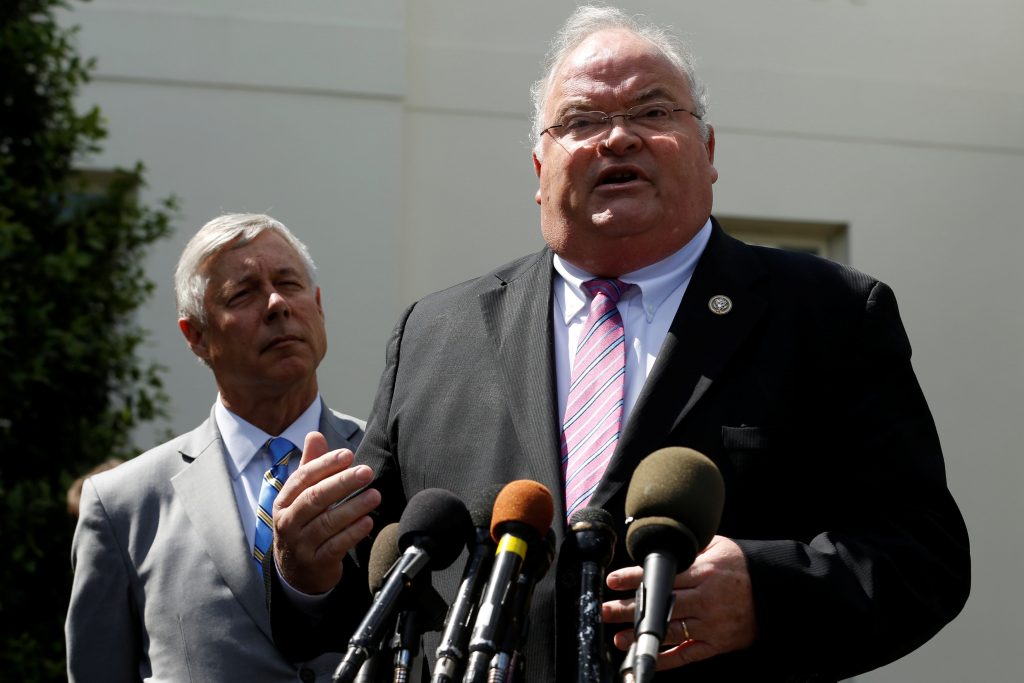 A pair of moderate Republicans who’d been holdouts against the GOP health care bill said on Wednesday that they were now backing the high-profile legislation after winning President Donald Trump’s support for their proposal for reviving the languishing measure.

The conversions of Reps. Fred Upton, R-Mich., and Billy Long, R-Mo., could breathe new life into the sagging Republican push to deliver their long-standing promise repeal former President Barack Obama’s health care overhaul. Upton and others said they believed the House could pass the legislation on Thursday.

But there was no immediate announcement of a vote, and it was initially unclear if the proposed revision would attract enough support to pull one of the party’s top priorities out of the legislative ditch where it’s resided for weeks.

An aide to Rep. Charlie Dent, R-Pa., one of the House’s highest-profile moderates, said Dent remained opposed to the GOP health care bill. He and other moderates have complained that the legislation erodes protections under Obama’s law against insurers charging people with pre-existing illnesses unaffordable premiums.

A supporter of the legislation, Rep. Tom Cole, R-Okla., said that at the least, support from Upton and Long “breaks the momentum of drift away from the bill” among GOP moderates.

Upton and Long were among four House members who met with President Trump at the White House.

For weeks, House leaders have lacked the votes for their drive to repeal much of Obama’s 2010 law, especially among moderate Republicans. Some have said they were within single digits of getting the 216 votes needed to prevail.

“Today we’re here announcing that with this addition that we brought to the president, and sold him on in over an hour meeting in here with him, that we’re both yesses on the bill,” Long told reporters at the White House.

Upton’s conversion was especially significant because he’s a respected, centrist voice on health issues and former chairman of the House Energy and Commerce Committee.

Before the White House meeting, House Speaker Paul Ryan praised the proposal and said the GOP was getting “extremely close” to finally being able to pass the stalled legislation.

“We’re getting extremely close,” Ryan, R-Wis., said on radio . He said the proposal “is something that nobody has a problem with, and it’s actually helping” round up support for the bill.

Including Upton and Long, The Associated Press has counted 21 GOP lawmakers opposing the Republican bill, one shy of the 22 needed to kill it, assuming all Democrats vote no.

At least 11 others said they were undecided, but all the figures are subject to fluctuation as both sides lobby heavily.

The existing health care measure would let states get federal waivers allowing insurers to charge higher premiums to people with pre-existing illnesses who’d let their coverage lapse. To get the waiver, the state must have a high-risk pool or another mechanism to help such people afford a policy.

Opponents said that would effectively deny such people coverage by letting insurers charge them unaffordable prices. They say high-risk pools have a mixed record because government money financing them often proves inadequate.

The money in Upton’s plan would help people with pre-existing illnesses pay premiums in states where insurers can charge them more.

There’s already around $130 billion in the legislation states could use to help people afford insurance, but critics have said that’s just a fraction of what would be needed for adequate coverage.

Under Obama’s law, insurers must charge healthy and seriously ill customers the same rates. The bill’s supporters say it protects those with pre-existing conditions and that the exclusion would affect only some of them.

An initial health care bill imploded in March under opposition by conservative and moderate Republicans. The overall bill would cut Medicaid, repeal tax boosts on higher-earning people, eliminate Obama’s fines on people who don’t buy insurance and give many of them smaller federal subsidies.