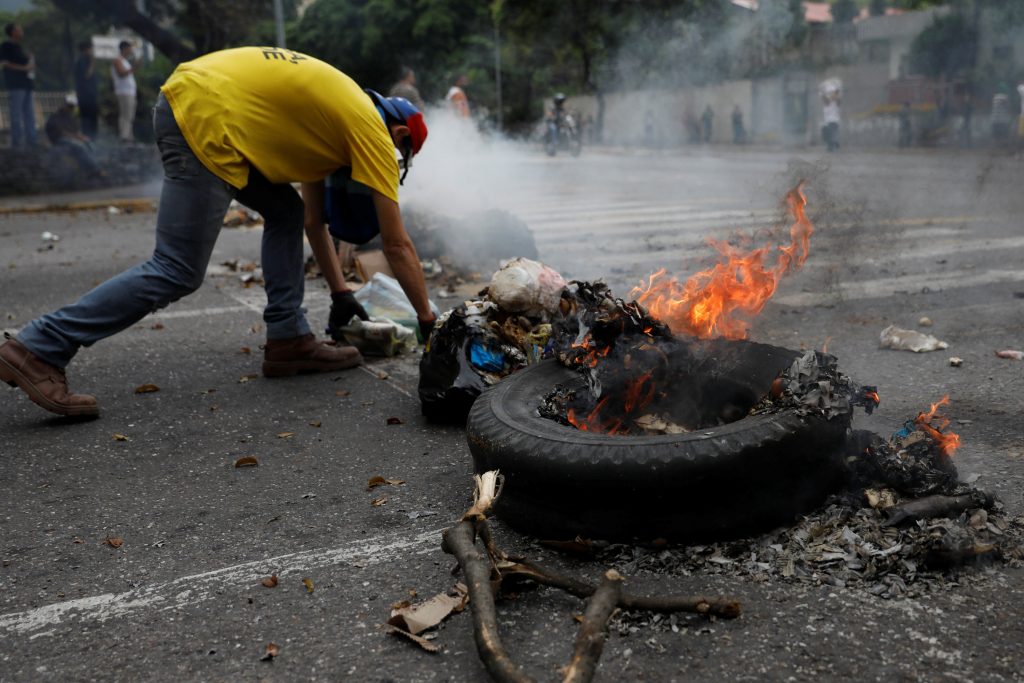 Caracas residents blocked streets with broken concrete, twisted metal and flaming piles of trash Tuesday to protest the socialist president’s bid to rewrite the constitution amid a deepening political crisis.

President Nicolas Maduro signed a decree Monday to begin the process of rewriting the country’s charter. Opposition leaders called the planned constitutional assembly a ploy to put off regional elections scheduled for this year and a presidential election that was to be held in 2018.

Polling suggests the socialists would lose both those elections badly at a time of widespread anger over triple-digit inflation and shortages of food and other goods.

Speaking hours after yet another big anti-government march ended in rock throwing and tear gas, Maduro said a new constitution was needed to restore peace.

“This will be a citizens’ assembly made up of workers,” the president said Monday. “The day has come, brothers. Don’t fail me now.”

“I am no Mussolini,” he added.

The president was vague about how members of the constitutional assembly would be chosen. He hinted some would be selected by voters, but many observers expect the selection process to favor the socialists.

If the constitutional process goes forward, opposition leaders will need to focus on getting at least some sympathetic figures included in the assembly. That could distract them from organizing the near-daily street protests that have kept up for four weeks, political analyst Luis Vicente Leon said.

“It’s a way of calling elections that uses up energy but does not carry risk, because it’s not a universal, direct and secret vote,” Leon said. “And it has the effect of pushing out the possibility of elections this year and probably next year as well.”

Venezuela’s constitution was last rewritten in 1999, early in the 14-year presidency of the late Hugo Chavez, who launched a socialist revolution in the oil-exporting nation. Chavez called his new constitution the best in the world, and promised it would last centuries. He carried around a blue pocket-sized version of the document, and would often whip it out and say, “This is our Bible. After the Bible, this.” At the height of his popularity, people would mob him to ask that he sign their copies.

The opposition immediately seized on Maduro’s proposal for a new charter as evidence that his mentor’s revolution lies in shambles.

The president of the opposition-controlled National Assembly, Julio Borges, called a constitutional assembly a “giant fraud” by Maduro and his allies designed to keep them in power. Borges said it would deny Venezuelans the right to express their views at the ballot box, and he urged the military to prevent the “coup” by Maduro.

“What the Venezuelan people want isn’t to change the constitution but to change Maduro through voting,” he said.

The opposition called for another major demonstration Wednesday.

In Washington, a senior State Department official expressed “deep concerns about the motivation for this constituent assembly, which overrides the will of the Venezuelan people and further erodes democracy.”

“What President Maduro is trying to do yet again is trying to change the rules of the game,” said the deputy assistant secretary of state for Western Hemisphere affairs, Michael Fitzpatrick.

Police repressed scattered protests Tuesday with tear gas, as they have nearly daily for weeks. At least 29 people have died in the unrest of the past month and hundreds have been injured. On Tuesday, the government suspended for 180 days the right to carry guns.

Meanwhile, a bus carrying government supporters back from a Monday demonstration crashed into another vehicle in Bolivar state, southeast of Caracas. Gov. Francisco Rangel said 13 people died and dozens were injured.

The wave of unrest began in reaction to an attempt to nullify the opposition-controlled congress, but has become a vehicle for people to vent their fury at Venezuela’s economic ruin and violent crime. Residents manning the barricades that choked streets across the capital Tuesday vowed to protest until Maduro leaves office.

“Unlike some of these young people, I remember a time before the socialists. Now is not the time for fear,” said 36-year-old chauffeur Ricardo Herrera as he arranged trash and pieces of concrete into a street barricade in front of his apartment building.

Herrera had so far sat out the protests because he had to get to work, but decided after Maduro’s announcement that he could no longer stand by.

“No one is going to work today. If we back down now, we’ll be under their boot for the rest of our lives,” he said.