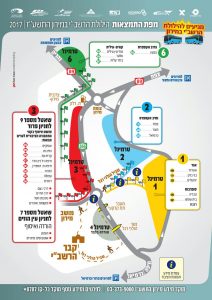 With hundreds of thousands of visitors expected again this year for Lag BaOmer at Meron, Israeli police are completing their preparations for the great event.

Thousands of police officers and volunteers will be on hand to maintain security and direct traffic, to make access to the site as easy as possible while minimizing disruption to the daily routine of local residents. Police will stay on until the celebrations, which begin Motzei Shabbos Parashas Emor, are over by the following evening.

Priority will be given to public transportation — buses and minibuses — under the direction of the Ministry of Transportation. The number of bus operating will be increased to handle the unusual load in addition to regular service in the country.

The participants in the celebration at Meron will be brought from cities and towns across the country to designated terminal points near the holy site.

Access will be granted only to buses and minibuses.

A color code will be employed as in past years for the convenience of visitors. Four colors — red, yellow, blue and green — will be used to indicate the different parking areas for different sectors of the public. Passenger tickets will be color-coded to match the terminals.

All the passengers from both of these parking areas will take shuttles from there to the disembarkation point at the traffic circle at the entrance to Meron.

For the return trip: Passengers with red tickets who got off at the entrance to Meron should board buses at the same place they arrived to return to the distant cities. Passengers bearing green tickets should likewise board buses where they arrived initially by the green gate.

This year, for the first time, buses running from Tzefas to Meron will operate from four collection points, to be announced. 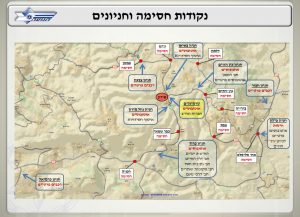 Road Closures: From May 12 at 7 a.m. until the conclusion of the Lag BaOmer event, the following roads will be closed to private vehicles:

Entry and Exit from Tzefas will be possible only via Route 8900 in the direction of Rosh Pinah.

In addition, visitors should take into account that, in accordance with changing conditions, during the days of the event, especially Wednesday, they may encounter closures on the following inter-city routes:

Route 65 from Golani in the direction of Kadarim; Route 85 between the Rama intersection and the Amiad intersection, in both directions.

The roadblocks on the approaches to Meron will be moved further from Meron as the time for the lighting of the central bonfire draws nearer.

It is recommended to stay updated on the latest traffic developments by dialing police information number 110. WAZE can also be used to keep up to date.

Special transportation for the handicapped will be arranged by Ezer Mitzion. For the first time, Ezer Mitzion will provide transportation until 12 midnight on Sunday, for persons with limited mobility, to the Kever or back, to the Ain Hozim parking area via Eliflet exchange.

It is important to note that public transportation to Meron will be far more reliable than by any private vehicle.

In the vicinity of Meron, access to local residents and visitors who have arranged for accommodations will be permitted on the roads closed to private vehicles only on presentation of an identity card bearing that address. Hotel guests will be required to show their reservations to police not after Friday at noon.

It should be stressed that access to the local hostels (tzimmerim) will be permitted only from the Hanania intersection.

No photography via unmanned devices of any type will be permitted in the area during the event.

Public Order: The police will be deployed to ensure public safety and the flow of traffic. Hundreds of thousands of people will converge on the small area for a short span of time, making their job difficult enough, and they will tolerate any disorders.
The public is requested to refrain from climbing onto the power installations, fences, bus stations, trees, and to move only along the roads and pathways marked for pedestrians.

The public is further called upon to keep very close watch on their children, an absolute must in such an extremely crowded venue. They must not be allowed out of the parents’ sight for a moment.

Drink plenty of liquids, should the weather turn warm.