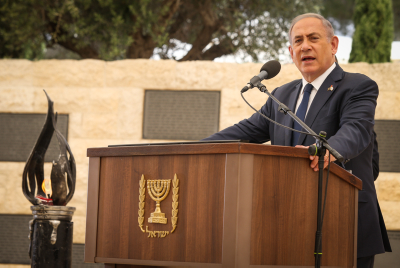 In advance of his meeting Wednesday with U.S. President Donald Trump, Prime Minister Binyamin Netanyahu called on Palestinian Authority chief Mahmoud Abbas to end the anti-Israel incitement funded by the PA. “How can you talk about peace and fund terror?” Netanyahu asked rhetorically during a speech at an event commemorating fallen Israeli victims of terror. “Stop paying the salaries of terrorists, and cancel the laws that reward terrorists who murder Jews. Fund peace, not murder.”

Abbas has spoken with President Trump on the phone once, at the end of March. According to media reports, the two discussed the importance of the two-state solution, and Mr. Trump promised that he would actively promote negotiations between Israel and the PA. The conversation took place just before Mr. Trump met with Jordan’s King Abdullah and Egyptian head of state al-Sisi, both of whom encouraged Trump to meet with Abbas.

According to reports, the two, along with Abbas, are promoting a version of the Saudi peace plan, which would entail a mass release of terrorists by Israel, and a building freeze. At a Cabinet meeting before Pesach, however, Prime Minister Binyamin Netanyahu told ministers that he had reached understandings with the Trump administration on construction — and those understandings did not entail a freeze.

Earlier, in a speech at a ceremony commemorating fallen IDF soldiers on Memorial Day, the prime minister said that he constantly thought about the soldiers who sacrificed their lives. “Our lives continue to be dependent on the bravery of our children. This bravery is not only a basic element of our survival, but also of our ability to achieve peace with our neighbors.”

Prime Minister Netanyahu also addressed the families of Hadar Goldin, Hy”d, and Oron Shaul, Hy”d, whose remains are being held by Hamas. “We will not rest until we bring them home,” Netanyahu said. “That is a commitment I make to you.”