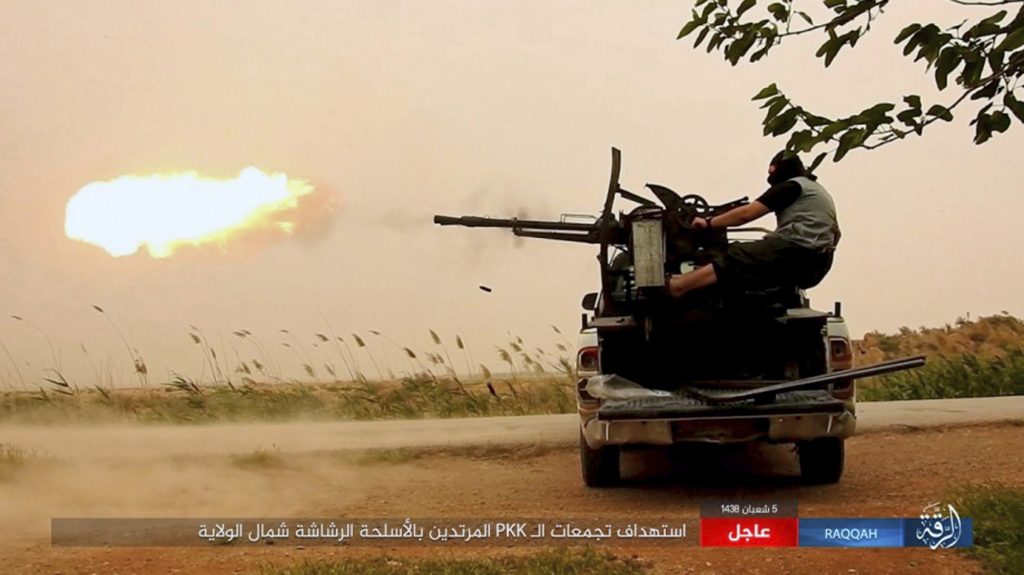 Islamic State terrorists staged a surprise attack early Tuesday in northeastern Syria, killing at least 30 people, most of them civilians who had fled fighting in areas of Syria and Iraq held by the terrorist group, a Kurdish spokesman and Syrian activists said.

The pre-dawn attack took place after terrorists sneaked into the village of Rajm Sleibi, located along a front line that separates the Kurdish-controlled Hasakeh province and IS-held areas further south.

The village, near the Iraqi border, houses a temporary camp sheltering hundreds of displaced people who fled IS-controlled territory in Syria and Iraq.

Redur Khalil, a spokesman for the main Kurdish fighting force in Syria, said the attack started with an early morning assault by IS terrorists on a checkpoint in Rajm Sleibi belonging to the Syrian Democratic Forces, a U.S.-backed Kurdish-dominated force that fights the Islamic State.

The terrorists then “committed a massacre” against civilians as they sought to enter SDF-controlled territory, Khalil said.

Khalil told The Associated Press the attack came a few hours after IS suicide bombers dressed in civilian clothes sneaked into the town of Shaddadeh and engaged SDF forces, triggering clashes that were ongoing.

The Britain-based Syrian Observatory for Human Rights, which tracks the Syrian conflict through activists on the ground, said Tuesday’s attack included suicide bombers and heavy clashes with the Kurdish-dominated U.S.-backed rebels. The Observatory put the death toll at 32 killed, including 23 civilians, many of them Iraqi.

The Islamic State terrorist group is under attack by an array of forces in Syria and Iraq.

In Syria, the Kurdish-dominated SDF, backed by U.S.-led coalition airstrikes, is now fighting to recapture the town of Tabqa from the Islamic State group.

The town is an important stronghold for the terrorists, located about 25 miles southeast of their de facto capital, the city of Raqqa. The Kurdish-led opposition fighters have pushed the extremists to northern neighborhoods of Tabqa, close to one of Syria’s largest dams and Kurdish officials anticipate the battle for Tabqa might be won in the coming hours.

In Iraq, the terror group is fighting for survival against Iraqi forces and their allies in the last neighborhoods it still holds in the western part of Mosul, Iraq’s second largest city.

Rajm Sleibi lies about 18 miles south of the town of al-Hol, which houses a large refugee camp for civilians displaced from Syria and Iraq. A Kurdish activist said it is the entry point to Hassakeh for Syrians civilians fleeing the eastern cities of Deir el-Zour and Raqqa in Syria, and those fleeing from Mosul and elsewhere in Iraq. The civilians initially spend about two weeks in Rajm Sleibi while they get security clearance from Kurdish authorities, and from there are taken then to al-Hol camp.

The activist, speaking on condition of anonymity fearing for his own safety, put the initial death toll at 22, saying the victims were mostly women and children displaced from the conflict. Issam Amin, a media activist in Hasakeh, said the victims arriving at the city’s hospitals had stabbing and knife wounds.

According to what he heard, the attack was carried out by just six IS terrorists who came in a hummer and shot and stabbed displaced Syrians and Iraqis waiting to be let into SDF areas.

The camp is within the zone of influence of the SDF but not immediately protected by the forces.

Syrian state-owned news agency SANA also reported the attack and said more than 30 people, including women and children, were killed and 34 others were wounded in the IS attack on Rajm Sleibi.