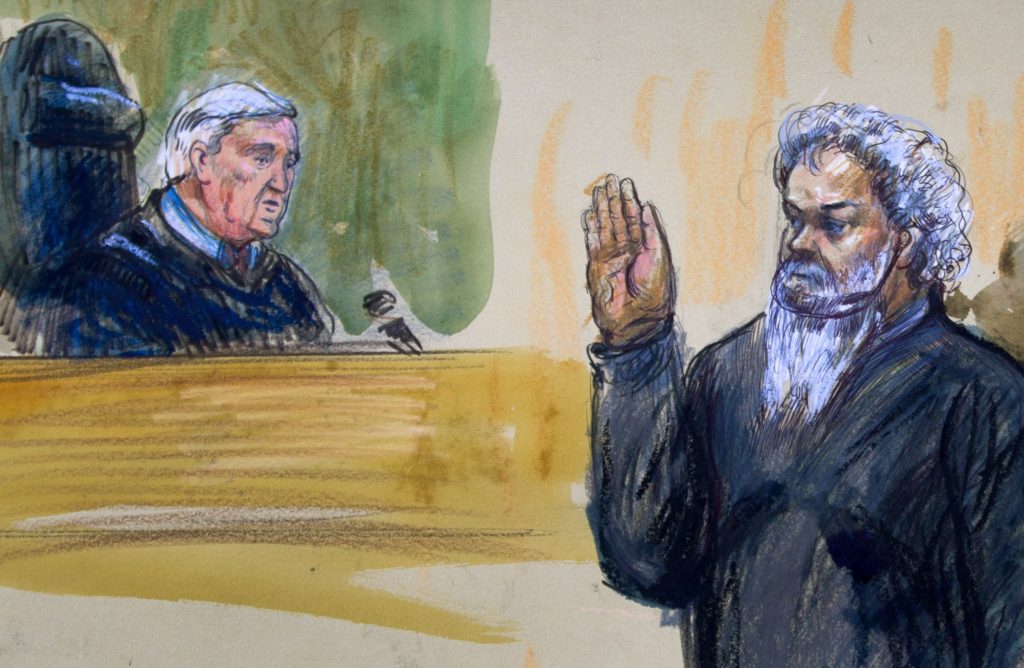 A Libyan terrorist charged with leading the lethal 2012 attacks on a U.S. diplomatic compound in Benghazi will ask a federal judge to throw out his statements to American authorities during his overseas capture and interrogation for 13 days aboard a U.S. Navy vessel.

The move to toss terrorist suspect Ahmed Abu Khattala’s statements was disclosed in a court filing late Monday as U.S. prosecutors and his defense prepare to argue the question using live testimony later this month from 16 witnesses including an onboard doctor and FBI inquisitors in a run-up to a September trial.

Abu Khattala’s request renewed a challenge to evidence gleaned through hybrid military-civilian policies adopted by U.S. officials to wring intelligence from terrorism suspects while preserving the ability to try them in civilian courts.

Abu Khattala, 45, pleaded not guilty last fall to charges including murder, conspiracy and destroying a U.S. facility in the Sept. 11, 2012 attacks that killed U.S. Ambassador J. Christopher Stevens and three other Americans.

He was questioned by U.S. military, intelligence and law enforcement officials shortly after his June 2014 capture by U.S. Special Forces, his attorneys have said. He was interrogated again by a second FBI team aboard the USS New York, at which point he allegedly waived his rights to not answer questions.

In pleadings in Washington before U.S. District Judge Christopher R. Cooper of the District of Columbia, Abu Khattala’s lawyers with the federal public defender’s office of the District of Columbia and the Lewis Baach law firm challenged whether the defendant was able to exercise his constitutional right against self-incrimination while in military custody and being transported to the United States.

At a two-week hearing set to begin May 10, Abu Khattala’s lawyers said they planned to call Hawthorne Smith, a clinical psychiatrist and associate professor at New York University Medical School, to testify to the “effects of the defendant’s long first-hand exposure to torture and extreme human rights abuses in Libya, including whether he would have been capable of providing a knowing waiver of his right to an attorney.”

Prosecutors with the national security section of the U.S. attorney’s office for the District of Columbia consented to Smith’s testimony at the May hearing but reserved their right to challenge his testimony at trial, according to the new filings.

Those filings show the government expects to call 14 witnesses at this month’s hearing including the captain of the USS New York; five FBI officials including agents who interviewed Abu Khattala who were present when he was apprehended, or were onboard; a physician who attended to him, and senior State and Justice department officials.

Monday’s court filing acknowledged the mostly secret nature of the U.S. government’s case to this point but also revealed a previously undisclosed court order from Cooper in April that said that some of the May hearing would be held out of public view to protect classified information.

Abu Khattala was charged by sealed complaint in July 2013 in the deaths at Benghazi. The U.S. government in January 2014 designated Abu Khattala a terrorist and Ansar al-Sharia, an armed militia he led that seeks to establish sharia law in Libya, a terrorist organization that allegedly carried out the attacks.

In June 2014, Abu Khattala was lured to a villa south of Benghazi and captured in a secret raid, coinciding with his formal indictment. He was held in military custody and interrogated for five days by a High Value Detainee Interrogation Group, according to his attorneys, who contend information from such efforts may further intelligence-gathering but cannot be admitted as evidence.

After that, a second group of FBI agents told Abu Khattala that he was under arrest and read him his Miranda rights, according to U.S. officials and defense filings.

His defense lawyers say Abu Khattala asked for a lawyer, that the government did not have one available and that FBI agents interrogated him for seven more days.

The government has agreed to declassify some material sought by Abu Khattala’s defense attorneys, but other still-classified information will be presented under a “silent document rule” that allows it to be admitted into evidence and known to the parties, a witness and the judge, while not being discussed in open court.