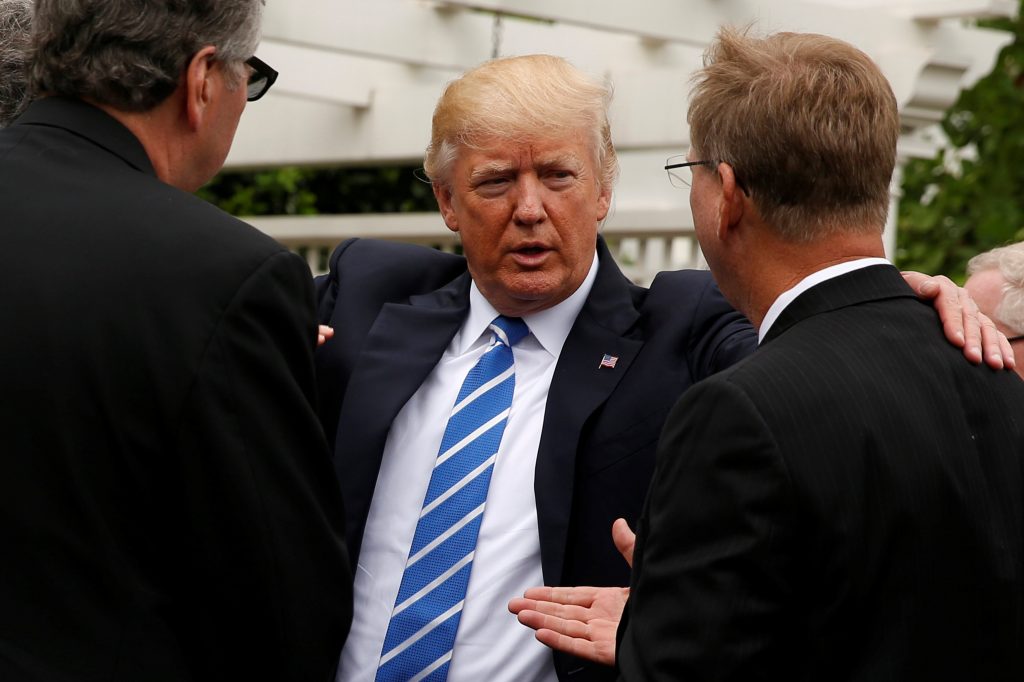 “I’m looking at that right now,” Trump said of breaking up banks in the 30-minute Oval Office interview. “There’s some people that want to go back to the old system, right? So we’re going to look at that.”

Trump also said he’s open to increasing the U.S. gas tax to fund infrastructure development, in a further sign that policies unpopular with the Republican establishment are under consideration in the White House. He described higher gas taxes as acceptable to truckers — “I have one friend who’s a big trucker,” he said — as long as the proceeds are dedicated to improving U.S. highways.

In other news, Trump said he’d be willing to meet with North Korean dictator Kim Jong Un, against the recommendations of his political advisers, to avert a military confrontation with the U.S. adversary. He also said that a Republican replacement for the Affordable Care Act would protect Americans with pre-existing conditions at least as well as Obamacare.

During the presidential campaign, Trump called for a “21st century” version of the 1933 Glass-Steagall law that required the separation of consumer and investment banking. The 2016 Republican party platform also backed restoring the legal barrier, which was repealed in 1999 under a financial deregulation signed by then-President Bill Clinton.

A handful of lawmakers blame the repeal for contributing to the 2008 financial crisis, an argument that Wall Street flatly rejects. Trump couldn’t unilaterally restore the law; Congress would have to pass a new version.

Trump officials, including Treasury Secretary Steven Mnuchin and National Economic Council Director Gary Cohn, have offered support for bringing back some version of Glass-Steagall, though they’ve offered scant details on an updated approach. Both Mnuchin and Cohn are former bankers who worked for Goldman Sachs Group Inc.

The Glass-Steagall law essentially split banking into two categories: deposit-taking companies backed by taxpayers that primarily made loans to businesses and consumers, and investment banks and insurers that trade and underwrite securities and create or focus on other complex instruments. Severing those businesses would prevent Americans’ nest eggs from flowing into more volatile capital markets, Congress reasoned at the time.

Trump said the tax cuts he’s seeking would, along with renegotiated trade agreements, serve as badly needed stimulus for the economy.

“That’s really a left-over from — in all fairness, I just got here,” he said. “So you’re growing at 1 percent or less, so we need a stimulus.”

Trump touched on a host of foreign and domestic issues during the interview.

Addressing the most urgent foreign policy and national security issue before him, Trump said he’d be willing to meet with North Korean leader Kim “under the right circumstances” if it would result in defusing tension on the Korean Peninsula.

“If it would be appropriate for me to meet with him, I would absolutely, I would be honored to do it,” Trump said.

“Most political people would never say that,” he said, “but I’m telling you under the right circumstances I would meet with him.”

No U.S. president has had direct contact with the North Korean regime and any contacts between the two nations have been limited since the signing of an armistice that halted the Korean War in 1953. Kim has never met with a foreign leader since taking charge after his father’s death in 2011 and hasn’t left his isolated country.

“The Philippines is very important to me strategically and militarily,” Trump said. “He’s been very, very tough on that drug problem but he has a massive drug problem.”