National Thousands in U.S. Ready to Rally Against President Trump for Workers
National 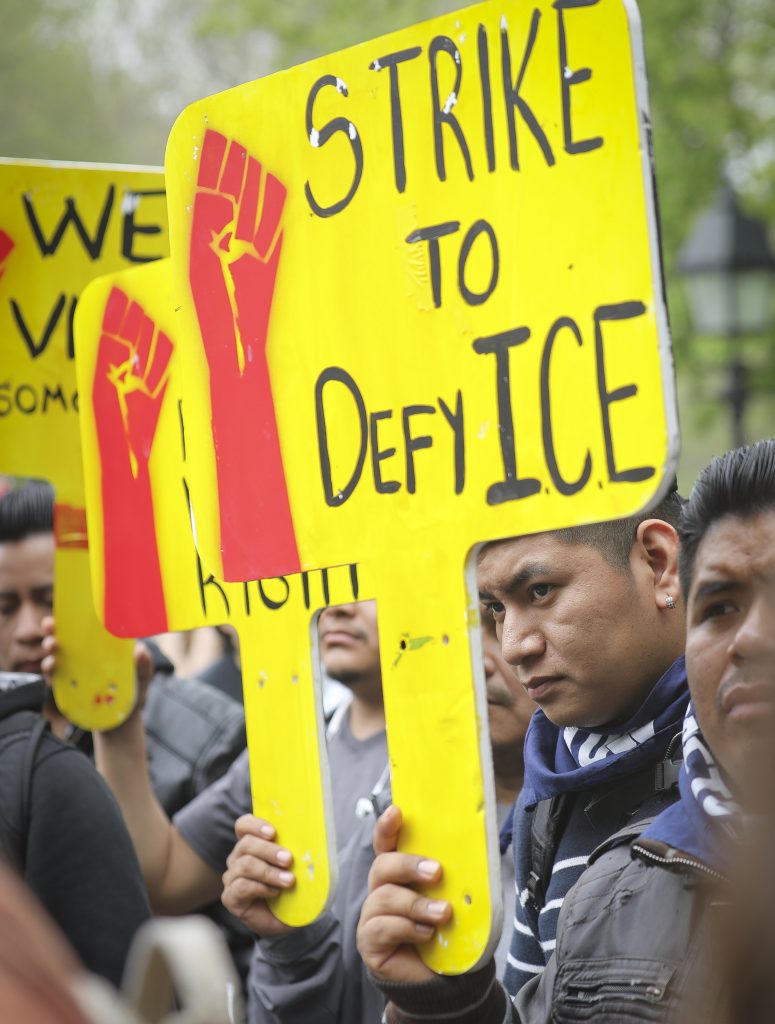 The demonstrations on May Day, celebrated as International Workers’ Day, followed similar actions worldwide in which protesters from the Philippines to Paris demanded better working conditions. There were violent clashes and mass arrests in some instances.

In the United States, there were no reports of violence, but protesters vowed to participate in civil disruptions throughout the day to draw attention to the importance of immigrants in American communities.

In Philadelphia, about 1,000 school teachers picketed at schools around the city. Supportive parents joined the teachers, many of whom took sick days to protest. Schools were open and the district said it was working with principals and substitute teachers to make sure classes would not be disrupted.

In Washington, D.C., commercial construction company owner Salvador Zelaya paid his employees to take the day off to attend a march. The Salvadorian business leader said his 18 workers were spending the morning making banners to take to a rally that will end in front of the White House.

Zalaya offered a simple message for the president: “All of us, we are immigrants. We came to this country. We work hard. We build up our own business. We employ people. We pay taxes and we make America great.”

The White House had no immediate response to the May Day demonstrations.

Much of the action was expected Monday afternoon and evening. Tens of thousands of immigrants and their allies planned to rally in major cities, including New York, Chicago, Seattle and Los Angeles. Demonstrations also were expected in dozens of smaller cities from Ft. Lauderdale, Florida, to Portland, Oregon.

While union members traditionally march on May 1 for workers’ rights in countries around the world, the day has become a rallying point for immigrants in the U.S. since massive demonstrations were held on the date in 2006 against a proposed immigration enforcement bill.

In recent years, immigrant rights protests shrank as groups diverged and shifted their focus on voter registration and lobbying. Larger crowds were expected to return this year as immigrant groups have joined with Muslim organizations, women’s advocates and others in their united opposition to Trump administration policies.

“We have never seen such an outpouring of support … since the election of Donald Trump,” said Kica Matos, a spokeswoman for the Fair Immigration Reform Movement.

In his first 100 days, Mr. Trump has aggressively pursued immigration enforcement, including executive orders for a wall along the U.S.-Mexico border and a ban on travelers from six predominantly Muslim countries. The government has arrested thousands of immigrants in the country illegally and threatened to withhold funding from jurisdictions that limit cooperation between local and federal immigration authorities.

In response, local leaders have vowed to fight back and civic participation has seen a boost, including February’s “Day Without Immigrants.” The travel ban and sanctuary order were temporarily halted by legal challenges.

In addition to rallies, immigrant rights activists in communities in Indiana, Massachusetts, Texas and elsewhere are calling for strikes to show Americans the demand for immigrant labor and immigrants’ purchasing power.

Immigrant advocates said they hope their message will reach Mr. Trump, congressional lawmakers and the public, as well as provide a sense of unity and strength to those opposed to the administration’s policies. Despite Mr. Trump’s avowed crackdown on illegal immigration, many said, they hoped a show of strength would help persuade politicians to rethink their plans.

“Every pivot back to the issue of immigration gives the immigrant rights movement another opportunity to make its best pitch to the public,” he said.