Israel OPINION: If President Trump Has a Strategy on Israeli-Palestinian Peace, It’s Remaining a Secret
Israel 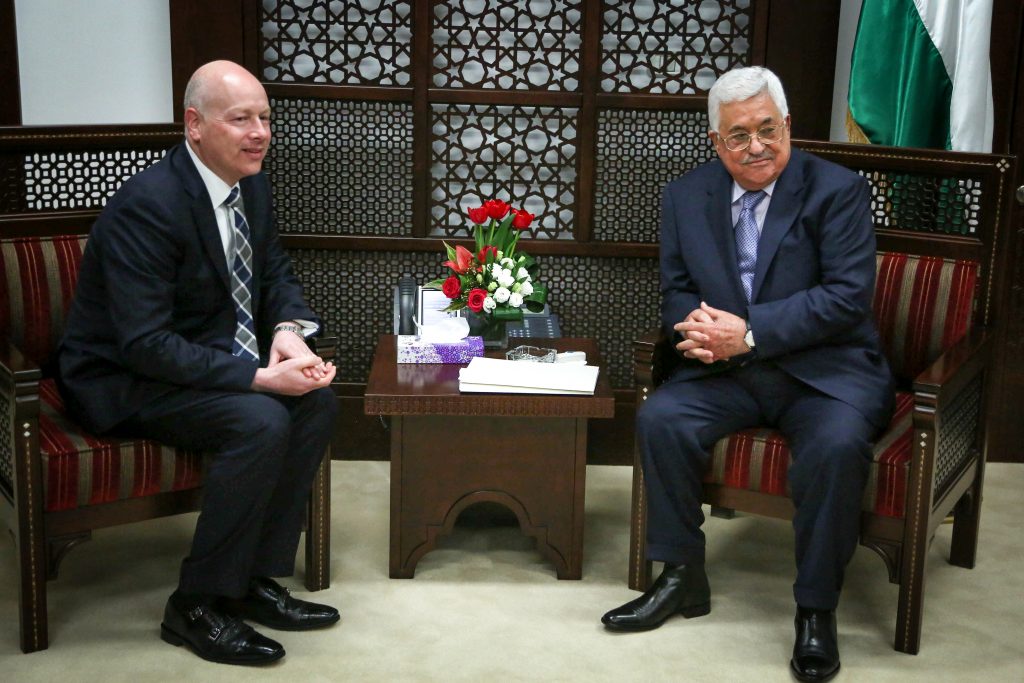 If President Donald Trump has a real strategy to make progress on the Israeli-Palestinian peace process, it’s such a tightly held secret that even the parties involved don’t seem to know what it is. When Palestinian President Mahmoud Abbas visits the White House this week, that mystery will be on full display.

Setting aside the patent absurdity of that statement, what’s clear is that the White House is willing to devote time and attention to new Middle East negotiations, and the president wants to be personally involved.

The problem is that there’s a glaring gap between Mr. Trump’s high-flying rhetoric and his still-unexplained strategy. As the Abbas visit approaches, there’s no clarity in sight.

Last week, a high-level Palestinian delegation led by chief negotiator Saeb Erekat traveled to Washington to prepare for the visit. The group met with President Trump’s envoy on Middle East peace, Jason Greenblatt, as well as with White House and State Department officials.

Both sides are keeping expectations for the Trump–Abbas meeting low. Palestinian officials tell me the Trump team doesn’t seem to know exactly what President Trump wants to discuss or propose. White House staff declined to say anything at all about their goals for the meeting. Some experts think that’s because there’s no depth to President Trump’s approach.

“How you deal with Abbas is directly related to a broader strategy, which unless they haven’t announced it, they simply don’t have,” said former Middle East negotiator Aaron David Miller. “It’s hard to see that this is going to turn out to be much more than a stage visit.”

In truth, there really isn’t much Mr. Trump and Abbas can agree to. There’s little hope that Abbas will give Trump what the U.S. side wants, namely a promise to address the issue of incitement in the Palestinian territories or a pledge to curb the Palestinian Liberation Organization’s policy of paying families of terrorists who have attacked Israelis and Americans.

Likewise, there’s no prospect that Mr. Trump will deliver what Abbas wants: a commitment to press the Israelis into a freeze of settlement-building that would meet Palestinian standards. The United States has secured an informal agreement with the government of Benjamin Netanyahu to place some limits on building new settlements, a version of the “build up, not out” framework from the George W. Bush administration. But that falls short of what Abbas says is needed before negotiations can begin.

The meeting could be significant by itself, if Trump and Abbas can establish a personal rapport to build on in the future. But therein also lies a risk.

“The president has never met Abbas, and that makes it an important meeting,” said former White House and State Department official Elliott Abrams. “But if he forms the opinion that Abbas is not strong enough to do a deal and then implement it, that will have a real impact on American policy.”

Sure to be present at the meeting is Mr. Trump’s son-in-law Jared Kushner, who is overseeing Greenblatt’s work. Kushner and his wife, Ivanka Trump, will reportedly join Donald Trump for a trip to Israel in late May, one that may also include a stop in Saudi Arabia.

Administration officials sometimes talk about an “outside-in” approach whereby a framework for peace negotiations would be arranged with Arab states and then folded into the Israeli-Palestinian dynamic. Details of that plan are hazy, and the Trump team has yet to explain how it plans to incentivize Arab states to buy in.

Martin Indyk, who served as President Barack Obama’s special envoy on this issue, said that President Trump’s approach of trying to find avenues to pursue is positive but cannot overcome the inability of Israeli and Palestinian leaders to make the political compromises necessary for real progress.

“Based on experience, there’s one principle that I operate on. By American willpower alone, the Israeli–Palestinian conflict cannot be resolved,” he said.

There are things the Trump team can do constructively, including bolstering Abbas by promoting economic development in Yehudah and Shomron, Indyk said. Making small progress on the margins could improve the chances for peace down the line.

But by going for headlines, not trend lines, President Trump is raising expectations and putting his administration’s already-thin credibility at risk. There can be dangerous consequences in the Middle East when high-stakes diplomacy fails. The new administration would be better off recognizing that peace is not in the offing.