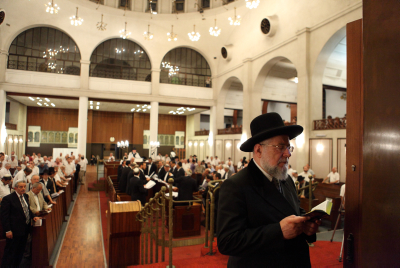 The Tel Aviv Municipality has canceled a debt seizure order against the city’s Great Synagogue for debts it claims the synagogue owes dating back nearly five years. The city had issued the order on Thursday, leading its president, longtime chazzan Shlomo Pivco, to declare that the shul would have to halt operations.

The announcement garnered denouncements in many quarters, and former Likud minister Gideon Saar took it upon himself to appeal to Tel Aviv Mayor Ron Huldai, who canceled the collection order. The city issued an apology and said it would try to work with the synagogue on the debt issue.

According to the city, the shul owes the municipality NIS 2 million over activities and events it held between 2008 and 2013. The shul operated a simchah hall which was available to anyone, with payment based on donations only. The city demanded that it be paid real estate tax (arnona) for the period, as it considered the operation of the hall a business, even though payment was voluntary.

The collection order demanded that the synagogue pay the sum in full, and the city blocked the shul’s bank account. The order also specified that assets, including sifrei Torah, would be seized in order to satisfy the debt. Pivco said that there was no way the shul could afford that kind of payment, and that it would have to close down. That threat has now been removed in the wake of the new “understandings” with the city, he said in an interview.