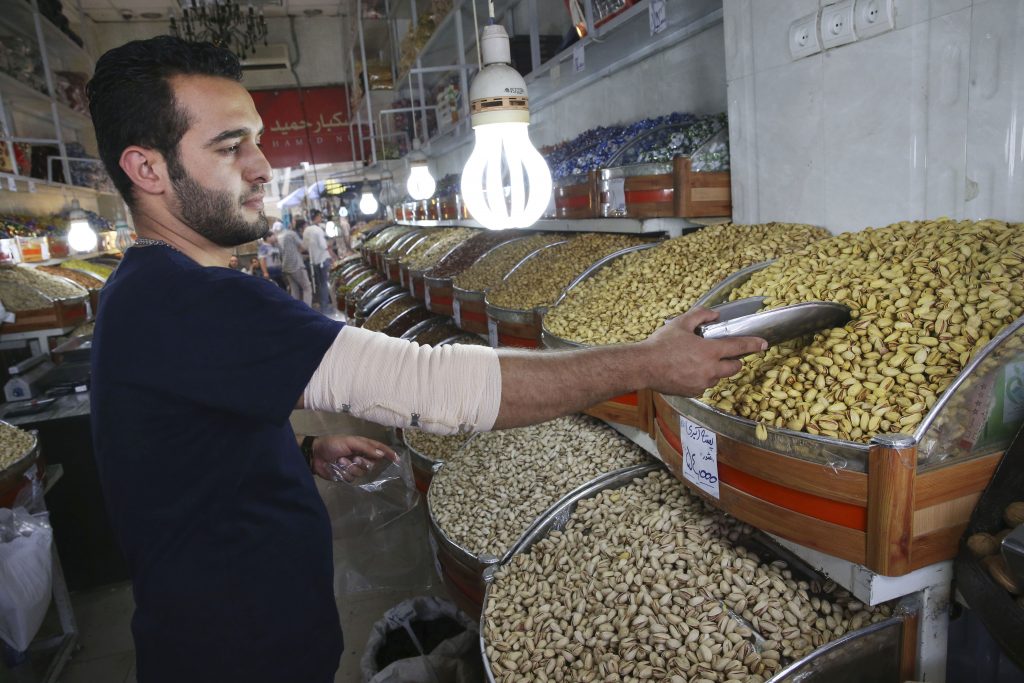 Pistachios now pose the latest flashpoint between Iran and the United States.

As the two countries struggle to redefine their relationship over weighty matters such as nuclear policy, California pistachio producers have another mission.

They’re lobbying hard to keep a stiff tariff on Iran’s raw in-shell pistachios. Iranians hope to remove a 241 percent duty that’s jacked up their potential U.S. prices since the mid-1980s. Federal officials will have to sort it all out, and soon.

“How can you reassure us that you won’t take advantage of the market opening?” Commissioner Meredith Broadbent of the U.S. International Trade Commission asked an Iranian trader at a hearing Thursday.

The businessman, Hossein Denis Ketabi, countered that the fractured Iranian pistachio industry would make only a modest impact in the United States.

“Competition is healthy. It’s a good thing,” said Ketabi, president of the board of Commercial Arman Pegah Co., adding that “it’s not 1985.”

“There is no doubt that if lower-priced product were to enter the market, even if it were inferior in quality and from another country, grower returns would plummet and the economic viability of this industry could be in jeopardy,” said Richard Matoian, executive director of the American Pistachio Growers.

Everyone agrees that the pistachio industry rooted in California’s San Joaquin Valley has blossomed since the 1980s, when Iranian imports were flooding the U.S. market. In 1985, barely 47,000 U.S. acres were planted in pistachios. By 2015, with Iranian imports having been all but shut out, California alone had 232,655 pistachio-bearing acres, according to the trade commission.

“The pistachio industry provides my constituents with stable, well-paying jobs,” Rep. David Valadao, R-Calif., advised the trade commission, adding that the “significant investment in pistachio acreage and processing facilities has made a positive impact on my district’s communities.”

Underscoring the industry’s political clout, Valadao’s testimony was augmented by similar testimony from Rep. Jim Costa, D-Calif. In addition to representatives of American Pistachio Growers, a Fresno-based trade group, executives with Wonderful Pistachios and Almonds also made the case during the hearing, which lasted through much of a day.

“We risk jeopardizing millions of dollars of investment and decades of growth if we allow Iran to resume its illicit practice of dumping inferior-quality products on the U.S. market,” Costa said.

Iranian pistachio imports have had a tangled history.

The duty has its roots in a complaint filed in 1985 by the California Pistachio Commission and several individual producers, who claimed the Iranians were dumping their pistachios on the U.S. market. The International Trade Commission agreed and imposed an anti-dumping duty order in 1986.

At the time, Iranian imports commanded 42 percent of the U.S. raw pistachio market, while U.S. producers accounted for 56 percent.

A total embargo blocked imports from 1987 to early 2000. Imports were then permitted before a ban was again imposed in September 2000. The Obama administration lifted the ban in January 2016.

“Change of circumstances should be taken into consideration,” Switzerland-based attorney Marie Didierlaurent told the trade commission, on behalf of the Iranian producers.

The five commissioners must base their decision, according to the law, on whether revoking the order “would be likely to lead to continuation or recurrence of material injury within a reasonably foreseeable time.”

Pressed by the commission’s chair, Rhonda K. Schmidtlein, about the potential for Iranian incursion into the U.S. market, Ketabi said Iranian imports would be “in the hundreds of tons, not thousands of tons,” during the first few years.

A decision is expected by the end of June.