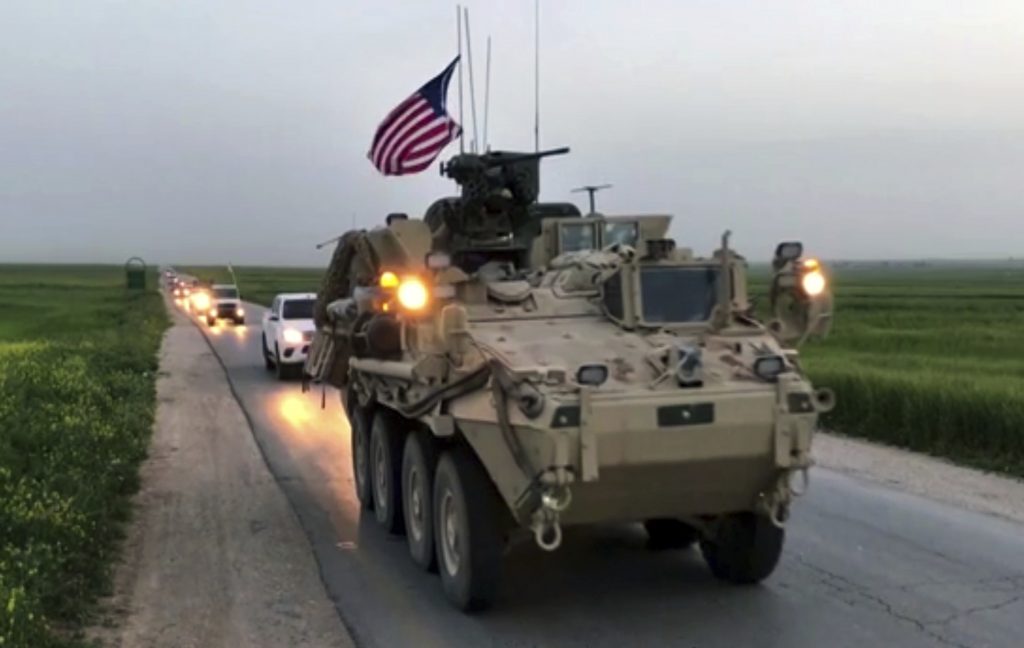 Tensions rose Saturday along the Turkish-Syrian border as both Turkey and the U.S. moved armored vehicles to the region and Turkey’s leader once again demanded that the United States stop supporting the Syrian Kurdish terrorists there.

The relocation of Turkish troops to an area near the border with Syria comes a day after U.S. troops were seen patrolling the tense border in Syria. Those patrols followed a Turkish airstrike against bases of Syrian Kurdish militia, Washington’s main ally in combating Islamic State terrorists in Syria.

More U.S. troops were seen Saturday in armored vehicles in Syria in Kurdish areas. Kurdish officials describe U.S. troop movement as a “buffer” between them and Turkey.

But Turkey views Syria’s Kurdish People’s Protection Units, known as YPG, as a terrorist organization and an extension of the Kurdish terrorists who have been waging a three-decade-long insurgency against Turkey.

“The YPG, and you know who’s supporting them, is attacking us with mortars. But we will make those places their grave, there is no stopping,” President Recep Tayyip Erdogan said.

Footage shot Friday night showed a long line of Turkish trucks carrying military vehicles driving to the border area. The private Ihlas news agency IHA reported the convoy was heading to southeastern Sanliurfa province from Kilis in the west. The base in the area is 30 miles from Syria’s Tal Abyad, a town controlled by the Kurdish militia.

The agency said the relocation comes after Turkish officials announced the completion of a phase of Turkey’s cross-border operation of Euphrates Shield in Syria, adding that the force may be used against Syrian Kurdish terrorists “if needed.”

Tensions in the border area rose this week when Turkey conducted airstrikes against bases of the YPG group in Syria and Iraq on Tuesday. The Turkish military said it killed at least 90 terrorists and wounded scores. The Kurdish group in Syria said 20 of its fighters and media activists were killed in the strike, which was followed by cross-border clashes.

Erdogan hinted his country is also ready to repeat its attacks in Sinjar, Iraq, to prevent it from turning into a base for the Kurdish militia.

Kurdish officials said the U.S. patrols are monitoring the Turkish-Syrian border to prevent an increase in tensions with Turkey, a NATO member and U.S. ally.

On Saturday, more U.S. troops in armored vehicles arrived in Kurdish areas, passing through Qamishli town, close to the border with Turkey. The town is mostly controlled by Kurdish forces, but Syrian government troops hold pockets of territory there, including the airport.

The convoy was followed by another of YPG militia. Some footage posted online showed Kurdish residents cheering American-flagged vehicles as they drove by.

U.S. officials say the troop movement is part of its operations with the Kurdish forces in northern Syria.

Ankara sent its troops into Syria last August in a military operation triggered in large part by the Kurdish group’s expansion along its borders.

The issue has been a source of tension between Ankara and Washington that threatens to hamper the fight against IS. Instead of working with the Syrian Kurds, Turkey is pressing the U.S. to let its army join the campaign for Raqqa, the self-proclaimed capital of IS.

Erdogan is due in Washington on May 16 for his first meeting with U.S. President Donald Trump.

Claiming that his country is leading the most effective campaign against IS, Erdogan said, “Let us, huge America, all these coalition powers and Turkey, let us join hands and turn Raqqa to Daesh’s grave,” using the Arabic acronym for IS.

The YPG forms the backbone of the U.S-backed Syria Democratic Forces.

Redur Khalil, the spokesman for the YPG in Syria, said Turkey is reinforcing its border posts opposite Tal Abyad as well as other border posts.

“We hope that this military mobilization is not meant to provoke our forces or for another purpose linked to entering Syrian territories. We don’t want any military confrontation between us, since our priority is to fight Daesh in Raqqa and Tabqa,” Khalil told The Associated Press.

Khalil said his forces were not building up in the area.