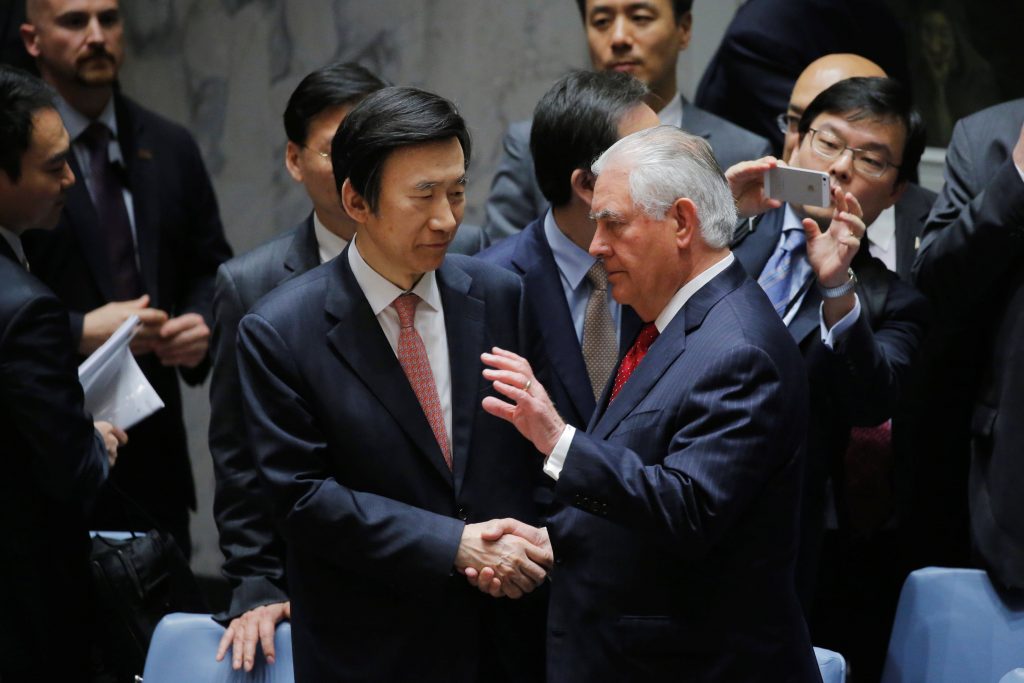 U.S. and South Korean officials said the test, from an area north of the North Korean capital, appeared to have failed, in what would be the North’s fourth straight unsuccessful missile test since March.

The test came as the USS Carl Vinson aircraft carrier group arrived in waters near the Korean peninsula, where it began exercises with the South Korean navy on Saturday, about 12 hours after the failed launch, a South Korean navy official said.

Tillerson, in a U.N. Security Council meeting on North Korea on Friday, repeated the Trump administration’s position that all options were on the table if Pyongyang persisted with its nuclear and missile development.

“The threat of a nuclear attack on Seoul, or Tokyo, is real, and it’s only a matter of time before North Korea develops the capability to strike the U.S. mainland,” Tillerson said.

“Failing to act now on the most pressing security issue in the world may bring catastrophic consequences.”

President Donald Trump said the launch was an affront to China, the North’s sole main ally.

“North Korea disrespected the wishes of China & its highly respected President when it launched, though unsuccessfully, a missile today. Bad!” President Trump said in a post on Twitter after the launch.

Chinese Foreign Minister Wang Yi told the U.N. meeting it was not only up to China to solve the North Korean problem.

“The key to solving the nuclear issue on the peninsula does not lie in the hands of the Chinese side,” Wang said.

In a commentary on Saturday, China’s official Xinhua news agency said both North Korea and the United States needed to tread cautiously.

“If both sides fail to make such necessary concessions, then not only will the two countries, but the whole region and the whole world will end up paying a heavy price for a possible confrontation.”

Trump, in an interview with Reuters on Thursday, praised Chinese leader Xi Jinping for “trying very hard” about North Korea but warned a “major, major conflict” was possible.

The North has been conducting missile and nuclear weapons related activities at an unprecedented rate and is believed to have made progress in developing intermediate-range and submarine-launched missiles.

Japanese Prime Minister Shinzo Abe condemned the test as a grave threat to the international order.

“I urged Russia to play a constructive role in dealing with North Korea,” Abe told reporters in London. “Japan is watching how China will act in regard to North Korea.”

U.S. officials, speaking on condition of anonymity, said the North Koreans had probably tested a medium-range missile known as a KN-17 and it appeared to have broken up within minutes of taking off.

The South Korean military said the missile reached an altitude of 44 miles before disintegrating. It said the launch was a clear violation of U.N. resolutions and warned the North not to act rashly.

With North Korea acting in defiance of the pressure, the United States could conduct new naval drills and deploy more ships and aircraft in the region, a U.S. official told Reuters.

The dispatch of Carl Vinson to the waters off the Korean peninsula is a “reckless action of the war maniacs aimed at an extremely dangerous nuclear war,” the Rodong Sinmun, the official newspaper of North Korea’s ruling Workers’ Party, said in a commentary on Saturday.

Intercontinental ballistic rockets will fly into the United States “if the U.S. shows any slight sign of provocation,” the newspaper said.

Kim Dong-yub, an expert at Kyungnam University’s Institute of Far Eastern Studies in Seoul, said North Korea might have got the data it wanted with the missile’s short flight, then blown it up in a bid to limit China’s anger, which warned Pyongyang against further provocation.

It is not clear what has caused the series of failed missile tests since then.

The Trump administration could respond to the test by speeding up its plans for new U.S. sanctions, including possible measures against specific North Korean and Chinese entities, said a U.S. official, who declined to be identified.

“Something that’s ready to go could be taken from the larger package and expedited,” said the official.

The U.N. Security Council is likely to start discussing a statement to condemn the missile launch, said diplomats.

But condemnations and sanctions resolutions since 2006, when North Korea conducted its first nuclear test, have done little to impede its push for ballistic missiles and nuclear arms.

The South Korean politician expected to win a May 9 presidential election, Moon Jae-in, called the test an “exercise in futility.”

“We urge again the Kim Jong Un regime to immediately stop reckless provocative acts and choose the path to cooperate with the international community,” Park Kwang-on, a spokesman for Moon, said in a statement, referring to the North Korean leader.

Moon has advocated a more moderate policy on the North and been critical of the deployment of an advanced U.S. missile defense system in the South intended to counter North Korea’s missile threat, which China also strongly objects to.