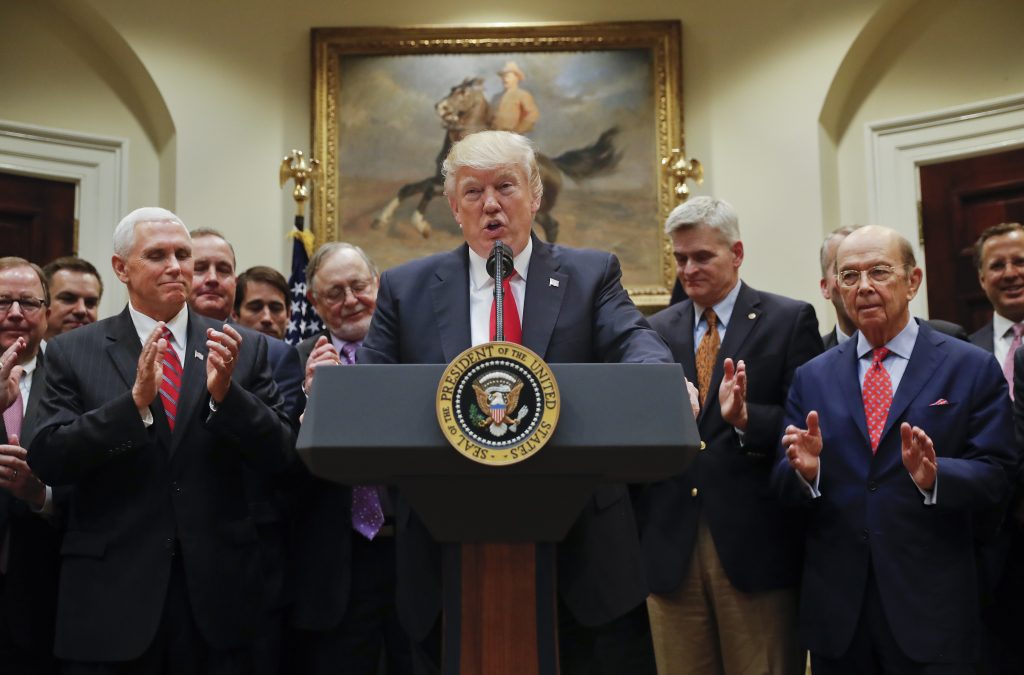 President Donald Trump signed an executive order on Friday aimed at expanding oil drilling in the Arctic and Atlantic oceans.

With one day left to rack up accomplishments before he reaches his 100th day in office, Trump signed an order reversing some of former President Barack Obama’s drilling restrictions and instructing Interior Secretary Ryan Zinke to review a plan that dictates which federal locations are open to offshore drilling.

It’s part of Trump’s promise to unleash the nation’s energy reserves in an effort to reduce oil imports and spur jobs, regardless of fierce opposition from environmental activists who say that offshore drilling exacerbates global warming, and harms whales, walruses and other wildlife.

U.S. oil production has boomed in recent years, primarily because of improved drilling techniques such as fracking that have opened up production in areas previously out of reach of drillers.

“This executive order starts the process of opening offshore areas to job-creating energy exploration,” Trump said during a White House signing ceremony. “It reverses the previous administration’s Arctic leasing ban and directs Secretary Zinke to allow responsible development of offshore areas that will bring revenue to our treasury and jobs to our workers.”

The executive order aims to reverse part of a December effort by Obama to deem the bulk of U.S.-owned waters in the Arctic Ocean and certain areas in the Atlantic as indefinitely off limits to oil and gas leasing.

It also directs Zinke to review the locations available for offshore drilling under a five-year plan Obama signed in November. The plan blocked new oil and gas drilling in the Atlantic and Arctic oceans. It also stopped the planned sale of new oil- and gas-drilling rights in the Chukchi and Beaufort seas north of Alaska, but allowed drilling in Alaska’s Cook Inlet southwest of Anchorage.

The order could lead to the opening of oil- and gas-exploration areas off Virginia, North Carolina and South Carolina, where drilling has been blocked for decades. It could also re-open the door to the use of seismic surveys by energy companies to map potential drilling sites for oil and natural gas in the Atlantic Ocean.

The oil and gas industry has pushed for Atlantic drilling and pledged that exploration would be done safely, with lessons applied from the disastrous 2010 BP oil spill in the Gulf of Mexico.

Many lawmakers from Georgia to Virginia support offshore drilling, but the plan faces broad opposition from the fishing industry, tourism groups and even the U.S. military, which has said that Atlantic offshore drilling could hurt military maneuvers and interfere with missile tests that the Navy relies on to protect the East Coast.

More than 120 coastal cities and towns from New Jersey to Florida – including cities such Wilmington, North Carolina; Myrtle Beach and Charleston, South Carolina; and Savannah, Georgia – have passed resolutions against Atlantic drilling and seismic testing.

Zinke said that leases scheduled under the existing plan will remain in effect during the review, which he estimated will take several years.

The order also directs Commerce Secretary Wilbur Ross to conduct a review of marine monuments and sanctuaries designated over the last 10 years.

Zinke, who is also tasked with reviewing other drilling restrictions, acknowledged environmental concerns as “valid,” but he argued that the benefits of drilling outweigh concerns.

Obama administration officials said they were confident that Trump would not be able to reverse Obama’s December action designating the bulk of U.S.-owned waters in the Arctic Ocean and certain areas in the Atlantic as indefinitely off limits to oil and gas leasing. The ban relies on an arcane provision in a 1953 law. White House officials said in December that the language of the statute provides no authority for subsequent presidents to undo so-called permanent withdrawals of oil and gas leases from the Outer Continental Shelf.

Trump’s move was applauded by the energy industry, including the National Ocean Industries Association.

“It’s a new day and a new attitude for American energy,” said the group’s president, Randall Luthi. “The time is right for such a review.”

Environmental activists and many Democratic officials, meanwhile, railed against the signing, which comes seven years after the devastating BP spill.

“When Deepwater Horizon exploded, Floridians saw firsthand the catastrophic consequences of offshore drilling. Spills don’t just devastate ecosystems; local economies that depend on the health of our environment and clean water also feel extreme pain,” said Rep. Charlie Crist, D-Fla. “I urge the Trump administration to reverse course and put the well-being of our coastal communities above oil-industry profits.”