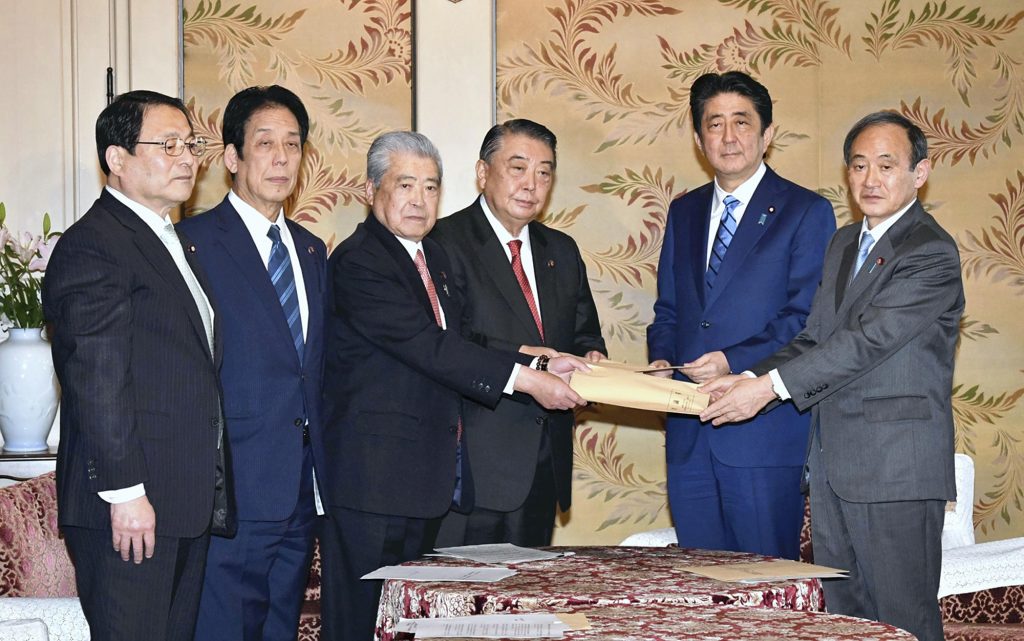 A special measures law being compiled to enable the Emperor to abdicate looks likely to be passed next month.

The government has presented the broad outline of a bill to establish the special law to the leaders and deputy leaders of both Diet chambers, as well as to each political party and parliamentary group. The bill has been significantly changed from the initial draft, such as by removing the honorific “heika” (your majesty) from the title, and its content is in line with a proposal compiled in March by the leaders and deputy leaders of both Diet houses based on discussions among the ruling and opposition parties. The Democratic Party, which disapproved of the initial draft, looks set to accept the broad outline, making it likely the bill for the special law could be passed as soon as May.

The bill’s title is the “Imperial House special measures law concerning the Emperor’s abdication and related issues.” The initial draft’s title included the phrase “tenno heika,” which means “Your Majesty, the Emperor,” to specify that the law is a one-off measure intended to be applied only to the current Emperor. However, the latest outline returned to the expression used in the proposal. The Democratic Party had demanded “heika” be dropped so the law could be used as a precedent.

Article 1 of the draft outline’s aim states that the Emperor has advanced to the age of 83 and is deeply concerned that it will become difficult to continue performing his public activities as a symbol of the state. It also specifies that the people understand this “feeling” and sympathize with it. The initial draft used the word “mental anguish,” but the latest outline stuck with “feeling” as used in the proposal.

Meanwhile, the outline avoided mentioning “the Emperor’s message,” in which he spoke on this issue in August 2016, despite the proposal using the phrase. The government explained to the parties and groups that this was omitted because of concern enacting legislation based on the Emperor’s message could infringe on Article 4 of the Constitution, which denies the Emperor any powers related to government.

Regarding a description to be included in a supplementary provision of the Imperial House Law, the initial draft used an expression indicating the special law would be in sync with the Imperial House Law. However, the latest outline added wording in line with that in the proposal, saying it would be established concerning the Emperor’s abdication.

The Imperial House Law stipulates that the Imperial family member first in the line of succession will immediately accede to the throne after the death of an emperor; it contains no provisions on abdication. It came into force in 1947, and carried on the main part of the former Imperial House Law enacted in 1889.

It says a government ordinance will set the timing of the abdication to fall “within a period of three years after the day of promulgation” of the special measures law. It will be obligated to listen in advance to the opinion of the Imperial Household Council, whose members include members of the Imperial family and the heads of the legislative, executive and judicial powers of government.

On Wednesday, the leaders and deputy leaders of the House of Representatives and the House of Councillors issued a statement saying they had decided to show the broad outline to each party and parliamentary group after deciding it was in line with their proposal. The same day, Sumio Mabuchi, secretary general of the Democratic Party’s committee considering the Imperial throne, who had been holding informal talks with the Liberal Democratic Party and its coalition partner Komeito, said to reporters, “The proposal we have put the effort into drawing up turned into a government bill.”

The government will compile an outline of the bill based on the broad outline and have the leaders and deputy leaders of both Diet chambers present it to a general meeting of representatives from each party and parliamentary group after the Golden Week holiday period finishes in May. After further discussions, it is scheduled to be approved by the Cabinet on May 19.