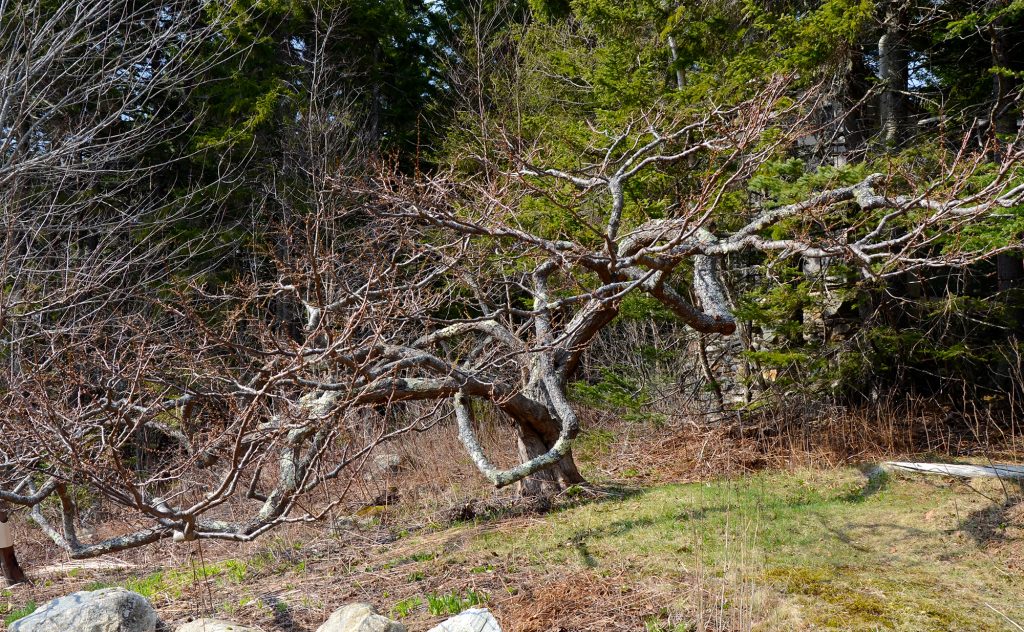 As I pull into the parking area at my neighbor Chip’s house in early spring, the late afternoon sun lights up her Shiro plum tree, and I sit there, staring at its beauty. No leaves have emerged, so you can see its eccentric shape. Forty years old, its limbs are a wild jungle gym of twists, turns and loops. Though not tall, its spread must be 40 feet across, maybe 50. Wider than Chip’s house.

A bunch of neighbors are there for a potluck, and as we sit on the porch we admire the old tree. Shiro is a variety of Japanese plum, and hence its growth habit is quite different from that of European plums. Instead of growing upright, most Japanese plum trees grow outward, though it’s rare to see one go to such lengths as Chip’s, obviously happy on a gentle, sun-facing slope.

Happy but not fruitful. “I don’t think I’ve gotten more than a bushel and a half of plums from it in all these years,” Chip complains.

Most of us are familiar with Shiro fruit, though. Chip’s next-door neighbors Mark and Mia have a younger tree that bears well, sometimes spectacularly. If I come home and find large, round, golden plums on the kitchen table, I know who grew them and put them there.

Lots of ripe plums are juicy, but not like Shiro. “They’re balls of juice,” Mia tells her fellow porch-sitters. It’s true. You can’t bite into them without them spattering all over you. “It’s best to prick a hole in the skin and just suck the juice out,” someone advises.

Marni and Claire, who live down the road, put up some of theirs for winter. “We squeeze them into a bowl with our hands and freeze the sweet, liquid-y pulp. It’s like eating sunshine,” Marni says.

Mark explains how he’s able to get such good harvests. It’s partly the pruning. Chip, over the years, has allowed some branches to grow back toward the trunk of her tree to compensate for its sprawl outward — hence the picturesque swirl at its center. Mark took a more drastic route for his tree, heading back all the outreaching limbs to where they were cut the previous year, stunting that growth. This stimulates fruiting on the compact tree that remains.

He also controls predation from the plum curculio, a snout beetle that’s a major pest of many fruits, not just plums. When the fruit is young and hard, the female uses her snout to wound it and lay an egg just under the skin. The larvae hatch inside, then tunnel, feed and burrow out again, leaving the fruit badly damaged.

Mark has had good results against plum curculio by spraying his tree with Surround, a nontoxic product approved for organic growers. It’s made from the chalk mineral kaolinite, refined to exclude impurities and micronize the particles to a finer texture that’s sprayable and disturbing enough to drive the beetles away.

Using a backpack sprayer with an eight-foot wand, Mark coats the tree after petal fall, when the fruits have set but are still as small as peas. With good coverage, one or two applications will do, depending on the severity of the infestation and whether heavy rain has washed the coating away. He sprays the grass under the tree to take care of any insects that have dropped. “They fold up their little lawn chairs and go,” Mia says.

Japanese plums bloom early, and pollination can be tricky. You need another Japanese plum that blooms at the same time to pollinate your tree. It should be a different variety. (Early Golden, Methley and Starking Delicious are popular ones.) But somehow, Chip’s and Mark’s Shiro trees have been pollinating each other for years. Sometimes Mark cuts flowering branches from her tree, puts them in water-filled glass jars and hangs them in his, just to be sure.

Such community cooperation counts for a lot, of course, but so does our local population of native bees, without which there would be fewer golden balls of juice for us to enjoy. The fact that none of us use bee-toxic products in our gardens helps ensure their survival.

This year, Mark and Mia got an assist from another friend, Debrae, who keeps honeybees but is often away on long sailing voyages. She entrusted them with her bees’ care over the winter, but now, sitting on Chip’s porch, she’s negotiating their return.

“Sure,” Mark says. “After the plum trees bloom.”

Damrosch is the author of “The Four Season Farm Gardener’s Cookbook.”