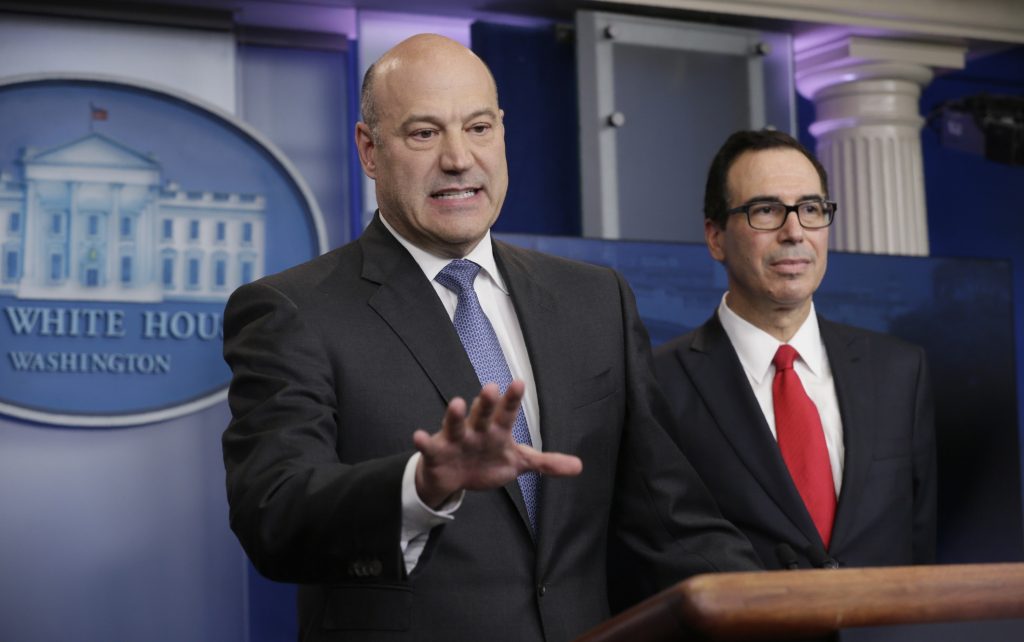 President Donald Trump on Wednesday proposed slashing tax rates for businesses and on overseas corporate profits returned to the country in a plan greeted as an opening gambit by his fellow Republicans in Congress.

The Trump administration touted the president’s blueprint – which also calls for raising standard deductions for individuals, repealing inheritance taxes on estates and simplifying tax returns – as a landmark proposal just days before Trump marks his 100th day in office on Saturday.

But while Republicans have long eyed tax cuts and the party controls the House of Representatives and the Senate, Trump’s proposal may be unpalatable to party fiscal hawks. It lacks plans for raising new revenue and could potentially add billions of dollars to the federal deficit

The plan was unveiled at the White House by Treasury Secretary Steve Mnuchin and Trump economic adviser Gary Cohn.

Mnuchin called the proposals “core principles” that would be worked on with Congress to produce a bill that can be passed. In answer to questions, he said the plan would pay for itself through economic growth, and by reducing tax deductions and closing loopholes.

“Our objective is to make U.S. businesses the most competitive in the world,” he said. “The president is determined to unleash economic growth for businesses.”

Much of the plan had emerged before the formal unveiling. Earlier on Wednesday, Republican House Speaker Paul Ryan, a longtime champion of a major tax restructuring, expressed optimism about it, even though it did not include a “border adjustment” tax on imports that he has pushed.

That controversial idea was part of earlier initiatives floated by House Republicans as a way to offset revenue losses resulting from steep tax cuts.

“We’ve seen a sneak preview. We like it a lot,” Ryan told a gathering of lobbyists and lawyers. “It puts us on the same page. We’re in agreement on 80 percent and on the (remaining) 20 percent we’re in the same ballpark.”

Republican lawmakers generally greeted Trump’s plan as a single viewpoint that will start negotiations in Congress and will ultimately be modified if it becomes law.

“I welcome the White House’s initiative on this, it’s a good thing,” Republican Representative Peter Roskam, a member of the tax-writing Ways and Means Committee, told lobbyists.

“If the president’s plan is to give a massive tax break to the very wealthy in this country – a plan that will mostly benefit people and businesses like President Trump’s – that won’t pass muster with we Democrats,” he said in a statement.

U.S. stocks pared gains on Wednesday after the plan was unveiled. While Wall Street has been optimistic about the prospect of corporate tax cuts since Trump’s election in November, the stocks rally has stalled lately due to a lack of clarity about Trump’s policies and concern over his failure to push through a health-care bill.

Some analysts said investors were aware of the long road ahead before any tax bill is passed.

“We have a pretty good idea that he (Trump) is targeting lower corporate taxes, lower individual taxes and a simplification of the process, but all that is in an ideal world,” said Andre Bakhos, managing director at Janlyn Capital in Bernardsville, New Jersey. “The market will not interpret the plan negatively, but there are obstacles in that course, just like with anything that Trump says and does.”

While public corporations’ profits or losses are taxed directly, “pass-through” businesses are taxed under the individual income tax code.

Mnuchin also said that Trump was proposing that corporations bring offshore profits into the country at a rate well below the current 35 percent rate. He did not say what that rate would be, but said that the administration was working with Congress on a low rate.

About $2.6 trillion in profits are being held tax-exempt abroad by U.S. multinationals under a rule that says they are only taxable if brought into the United States, or repatriated. Trump proposes requiring repatriation, but at the lower rate.

If enacted, the measure would produce a one-time surge in revenue that could be dedicated to infrastructure spending, an idea that could attract votes from Democrats.

Democrats and fiscal-hawk Republicans will be concerned about how much Trump’s proposals would cause the deficit to balloon. To minimize that impact, Republicans will rely heavily on “dynamic scoring.” This is a controversial economic modeling method that attempts to predict economic growth and new tax revenues resulting from tax cuts.

“The overall economic plan consists of massive tax cuts and tax reform, regulatory relief and renegotiating trade deals, and with that we will unlock the economic growth that’s been held back for too long in this country,” Mnuchin said.

The Retail Industry Leaders Association, comprised of some of the nation’s largest retailers, including Wal-Mart Stores Inc , Target Corp and Best Buy Co Inc, praised Trump’s call for a lower tax rate and reiterated opposition to the idea of the border adjustment tax.