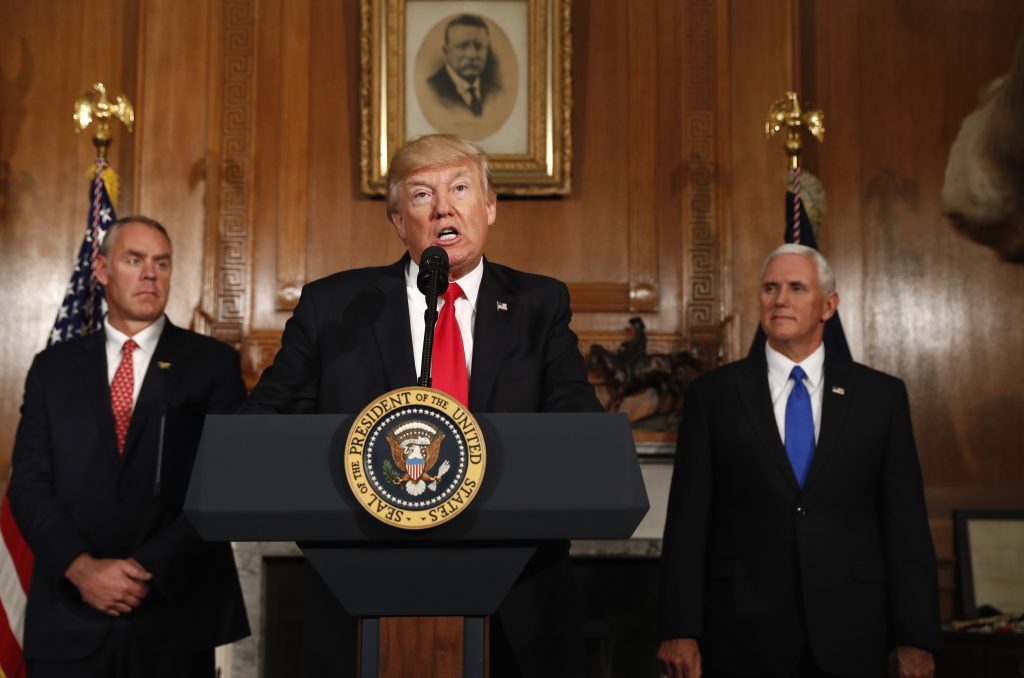 Slamming what he called “a massive federal land grab,” President Donald Trump signed an executive order Wednesday directing his interior secretary to review the designation of dozens of national monuments on federal lands.

The action could upend protections put in place in Utah and other states under The Antiquities Act of 1906, which authorizes the president to declare federal lands as monuments and restrict how the lands can be used.

During a signing ceremony at the Department of the interior, Mr. Trump said the order would end “another egregious abuse of federal power” and “give that power back to the states and to the people where it belongs.”

Mr. Trump accused the previous administration of using the act to “unilaterally put millions of acres of land and water under strict federal control” – a practice he derailed as “a massive federal land grab.”

“Somewhere along the way the Act has become a tool of political advocacy rather than public interest,” said Interior Secretary Ryan Zinke ahead of the signing. “And it’s easy to see why designations in some cases are viewed negatively by those local communities that are impacted the most.”

Former President Barack Obama infuriated Utah Republicans when he created the Bears Ears National Monument in late December on more than one million acres of land that’s sacred to Native Americans and home to tens of thousands of archaeological sites, including ancient cliff dwellings.

Republicans in the state have asked Mr. Trump to take the unusual step of reversing the designation, arguing it will stymie growth by closing the area to new commercial and energy development. The Antiquities Act does not give the president explicit power to undo a designation and no president has ever taken such a step.

The order is one of a handful the president is set to sign this week as he tries to rack up accomplishments ahead of his 100th day in office. The president has used executive orders aggressively over the last three months, despite railing against their use by Mr. Obama when he was campaigning.

Zinke said that the order would cover several dozen monuments across the country designated since 1996 that total 100,000 acres or more, from the Grand Staircase-Escalante National Monument in southern Utah to the Bears Ears in southeastern Utah.

He’ll provide an interim report in 45 days in which he’ll provide a recommendation on Bears Ears and a final report within 120 days.

Over the last 20 years, Zinke said, tens of millions of acres have been designated as national monuments, limiting their use for farming, timber harvesting, mining and oil and gas exploration, and other commercial uses.

Zinke said that while designations have done “a great service to the public,” the “local community affected should have a voice.”

Some, including Sen. Orrin Hatch, R-Utah, have hailed the order as the end of “massive federal land grabs” by presidents dating to Bill Clinton.

But Sen. Martin Heinrich, D-N.M., said that if Mr. Trump truly wants to make America great again, he should use the Antiquities Act to protect and conserve America’s public lands. In New Mexico, Mr. Obama’s designation of Rio Grande del Norte National Monument and Organ Mountains-Desert Peaks National Monument have preserved important lands while boosting the economy, Heinrich said, a story that has been repeated across the country.

“If this sweeping review is an excuse to cut out the public and scale back protections, I think this president is going to find a very resistant public,'” Heinrich said.