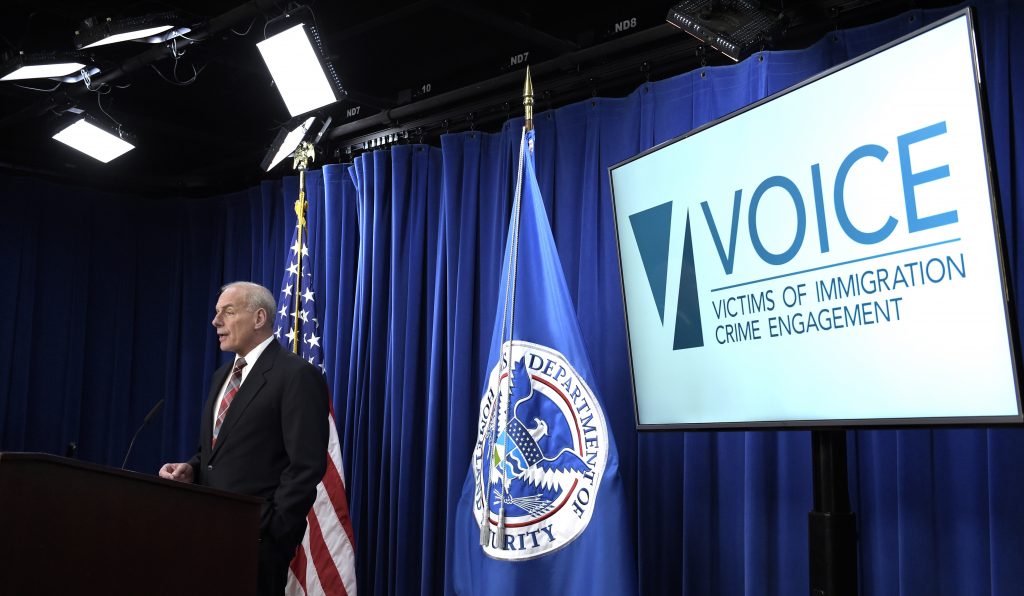 Stymied on his top immigration initiatives, President Donald Trump is making good on one plan that critics denounce as fearmongering and misleading: opening an office for victims of crimes committed by immigrants, although studies show immigrants are less likely to commit crimes than native-born citizens.

Homeland Security Secretary John Kelly on Wednesday opened the office dubbed the Victims of Immigrant Crime Engagement, or VOICE. He said it will be used to keep victims informed of the immigration proceedings of suspects and generally walk them through the complicated and often drawn-out immigration court process. The office will be staffed by Immigration and Customs Enforcement employees.

Kelly focused his brief remarks on immigrant criminals in the country illegally, saying they never should have been in the United States and able to carry out crimes. But the ICE officials will also aid victims of crimes attributed to immigrants living in the United States legally, a group that could include permanent residents.

The Trump administration has frequently highlighted crimes committed by immigrants in the country illegally and the cases receive widespread attention in pro-Trump news outlets, often more than comparable crimes committed by U.S. citizens. But the administration has not provided statistics about the crimes or countered studies indicating that immigrants are less likely than native-born Americans to commit crimes.

When asked how many crimes have been attributed to immigrants, Homeland Security spokesman David Lapan said “too many.”

Brent Wilkes, CEO of the League of United Latin American Citizens, said the office appears to be little more than an extension of Trump’s rhetoric against immigrants.

“It’s pretty clear to me that the goal here is to do the kind of thing he did on the campaign trail,” Wilkes said. He added the office is unnecessary because ICE has long had the authority to keep crime victims informed.

Rep. Bennie Thompson (D-Miss.) quickly decried the effort as a waste of money at a time when other threats face the country.

“Doing this not only ignores the vast majority of the crime, but stokes racist and xenophobic fears while dividing the country,” said Thompson, the top Democrat on the House Homeland Security Committee.

President Trump announced plans for the office in February. The unveiling Wednesday came as he highlights accomplishments ahead of Saturday’s 100th day of his presidency. Immigration was his core issue in the campaign, but he has faced repeated setbacks on the issue. Courts have blocked orders barring temporarily the admission of refugees and visitors from six Muslim-majority nations and stripping some federal funding from so-called sanctuary cities that the government says aren’t cooperating with immigration authorities. Preliminary efforts to fund a border wall have encountered obstacles in Congress, and Trump backed away from his earlier insistence that a pending budget deal include more than $1 billion for a down payment on the wall.

In his remarks, Kelly said victims of immigrant crimes have historically been ignored by the federal government and left without answers about a suspect’s immigration proceedings. He said the VOICE name is fitting because the government is giving “for the first time a voice of their own to these victims.”

It’s unclear how much information ICE will be able to provide to crime victims given privacy protections afforded to immigrants depending on the nature of their immigration status and the details of their case. The same executive order that called for creating VOICE also directed Homeland Security to overhaul its privacy policy and ensure that immigrants in the country illegally are not afforded the same privacy protections as U.S. citizens. The agency said its lawyers are still reviewing the policies.

ICE already maintains a publicly accessible internet site to track an immigrant detainee’s location, but the immigration court system, run by the Justice Department’s Executive Office for Immigration Reform, does not allow online access to case information. The court’s records are only accessible by telephone and someone looking for information must have an immigrant’s registration number.