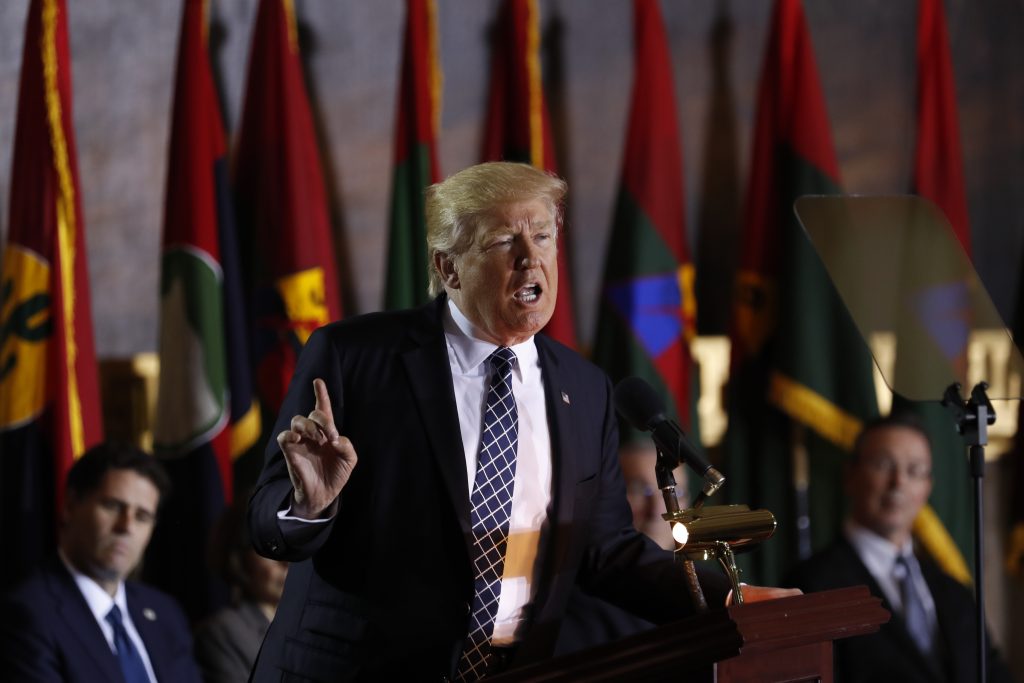 Pledging to confront anti-Semitism in all its forms and to “never be silent,” President Donald Trump on Tuesday denounced as an accomplice to “horrible evil” anyone who denies that six million Jews were killed during the Holocaust.

In a speech marking the day that the state of Israel commemorates the Holocaust, Mr. Trump also pledged that as president of the United States he will “always stand with the Jewish people.”

Mr. Trump spoke at a U.S. Capitol ceremony hosted by the U.S. Holocaust Memorial Museum to mark the unveiling of a new conservation and research center. The center will serve as a repository for a vast collection of artifacts donated by those who survived Adolf Hitler’s massacre of Jews during World War II.

Members of Congress and Holocaust survivors — whose strength and courage Mr. Trump said was an inspiration — attended the emotional event in the Rotunda, the center of the Capitol. Survivors lit candles at the end of the ceremony.

“Those who deny the Holocaust are an accomplice to this horrible evil and we’ll never be silent. We just won’t,” he said. “We will never, ever be silent in the face of evil again.”

Mr. Trump said Holocaust denial is one form of “dangerous anti-Semitism that continues all around the world” and that can be seen on university campuses, in attacks on Jewish communities “or “when aggressors threaten Israel with total and complete destruction.”

Mr. Trump’s commemoration of the Holocaust follows a recent blunder by his chief spokesman, Sean Spicer, on the issue.

Spicer recently apologized for making what he later said was an “inappropriate and insensitive” statement earlier this month that compared Hitler to Syrian President Bashar Assad by suggesting that Hitler “didn’t even sink to using chemical weapons.”

The remark, which Spicer had made days after a chemical attack in Syria killed scores of civilians, ignored Hitler’s use of gas chambers to kill Jews.

The White House’s commitment to fighting anti-Semitism was questioned earlier in the year after it released a statement on International Holocaust Remembrance Day that excluded any mention of the Jewish people, in contrast to similar statements from previous administrations. Some also thought Mr. Trump had waited too long to come out forcefully against bomb threats against Jewish community centers nationwide.

Addressing survivors in attendance at the Capitol, Mr. Trump called each one a “beacon of light.”

“It only takes one light to illuminate even the darkest space, just like it takes only truth to crush a thousand lies and one hero to change the course of history,” he said. “We know that in the end good will triumph over evil and that as long as we refuse to close our eyes or to silence our voices, we know that justice will ultimately prevail.”

Also Tuesday, Trump’s daughter Ivanka visited the Memorial to the Murdered Jews of Europe in Berlin. Ivanka Trump, who has a job in the administration as an assistant to the president, was on an official visit to Berlin.

Ivanka walked slowly through the undulating grounds filled with concrete slabs, along with U.S. Embassy personnel. She was flanked by a strong police guard keeping tourists and others at a distance.

She paused occasionally to look at the slabs, before emerging on the other side of the monument.