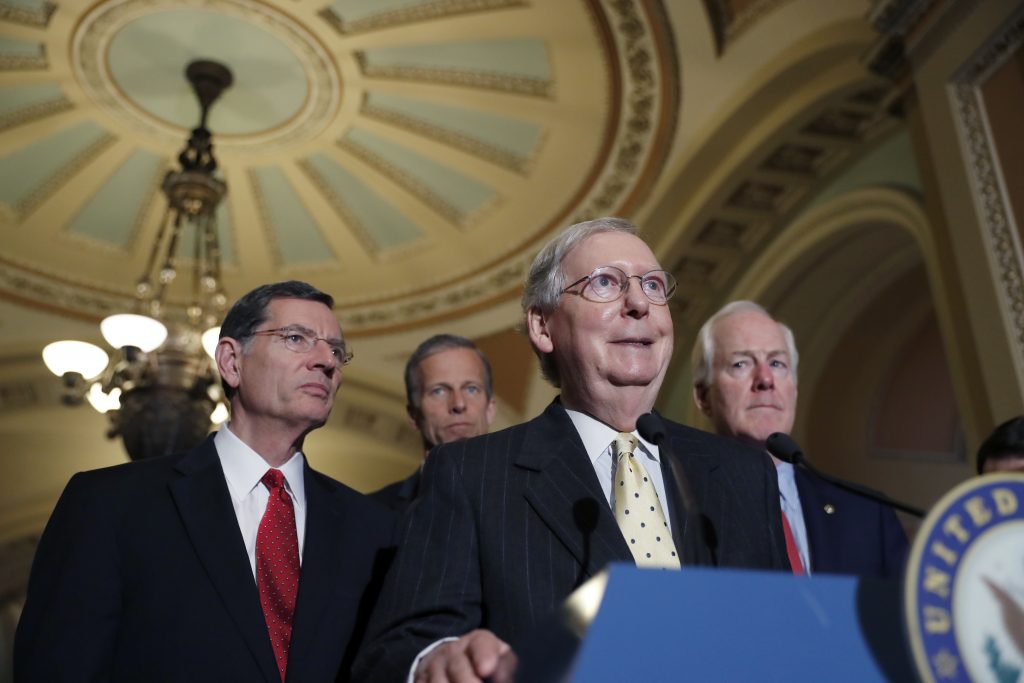 Congressional negotiators on Tuesday inched toward a potential agreement on a catchall spending bill that would deny President Donald Trump’s request for immediate funding to construct a wall along the Mexico border. The emerging measure would increase the defense budget and eliminate the threat of a government shutdown on Mr. Trump’s 100th day in office this Saturday.

Top Senate Democrat Chuck Schumer said Republican negotiators were following the lead of Mr. Trump, who signaled Monday evening that he would not insist on $1 billion worth of wall funding now as an addition to the $1 trillion-plus spending bill. Mr. Trump told a gathering of conservative media reporters that he might be willing to wait until September for the funding.

A remaining stumbling block is a recent threat by Mr. Trump to scuttle a portion of former President Barack Obama’s health law that helps low-income people afford insurance policies, but the decision by Mr. Trump and his GOP allies to back down on the wall steered the talks on the spending measure in a positive direction.

Senate Majority Leader Mitch McConnell, R-Ky., said he was optimistic the talks would produce “an agreement in the next few days.”

An existing temporary funding bill expires Friday at midnight and all sides anticipated that another stopgap measure would be required to buy time for the House and Senate to process the massive spending bill, which would wrap together 11 unfinished agency spending bills through September.

Mr. Trump campaigned throughout the country last year promising a wall across the entire 2,200 mile southern border, promising that Mexico would pay for it. But while the idea is a priority of Mr. Trump’s most fervent supporters, it is resolutely opposed by Democrats and even many Republicans, who see it as wasteful and who prefer other steps like new technologies and additional border agents to curb illegal immigration.

“I support additional border security funding,” said Sen. Lindsey Graham, R-S.C., a GOP critic of Mr. Trump who dined with the president Monday at the White House. “But a 2,200-mile wall, I don’t think there’s a whole lot of support for it.”

Mr. Trump vowed to fight for the wall.

“The wall is going to get built,” he said at the White House Tuesday. Asked when, he said, “Soon.”

Democrats vowed not to give up, either, and look forward to the fight.

“It’s not a negotiation,” Schumer said. “No wall.”

Meanwhile, Mr. Trump appeared poised to procure about $15 billion to boost the military. Democrats said they were satisfied with the emerging outlines of the measure, which stick closely to versions of the legislation that were being negotiated late last year.

Several issues remain unresolved. Democrats, with McConnell’s help, were pushing to extend health benefits for 22,000 retired Appalachian coal miners and their families whose medical coverage is set to expire at the end of April. Democrats faced White House opposition in an uphill battle to give Puerto Rico help with its Medicaid commitment, while Republicans are pressing policy “riders” to undo new Obama-era financial regulations.

Democratic votes are invariably needed to pass catchall spending bills, which typically are resented by many tea party Republicans. That gave Democratic leaders like Schumer and Pelosi significant leverage, and the top Democrats had earlier this month taken a hard line in response to Mr. Trump’s threats to deny the Obamacare payments for out-of-pocket costs for the poor. Schumer said Tuesday, however, that the issue did not have to be addressed in the catchall bill.

Meanwhile, House lawmakers were returning to Washington Tuesday evening and faced a renewed push from the White House to revive their beleaguered health care bill in hopes of attracting enough votes to finally push it through the House.

Both efforts come with Congress back from a two-week break just days before Mr. Trump’s 100th day in office, an unofficial measuring stick of a new president’s effectiveness. With little to show in legislative victories so far, the Trump administration would love to claim achievements on Capitol Hill by that day.