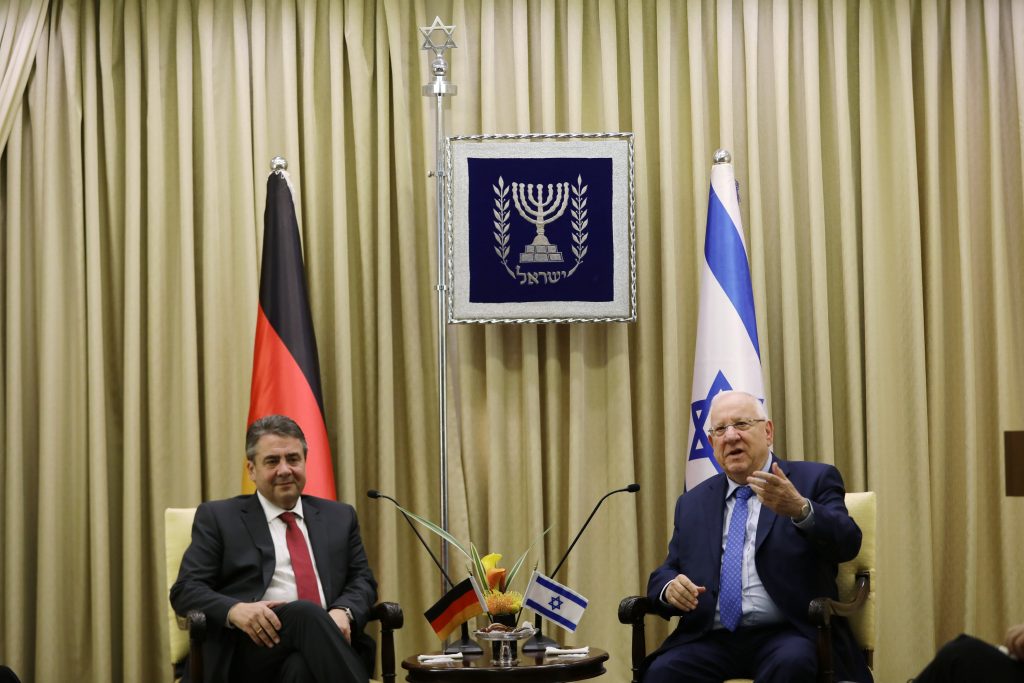 Prime Minister Binyamin Netanyahu canceled talks on Tuesday with Germany’s visiting foreign minister after he rejected the Israeli leader’s demand not to meet with left-wing groups critical of Israel’s treatment of Palestinians.

The dispute threatened to widen a rift between Israel and Germany over the Palestinian issue. Berlin has been increasingly critical of the settlement policies of PM Netanyahu’s government.

“The meeting is canceled,” said David Keyes, a Netanyahu spokesman.

On Monday, an Israeli official had said the prime minister would not see German Foreign Minister Sigmar Gabriel if he decided to meet with the Israeli group “Breaking the Silence.”

The organization, a frequent target of criticism by the Israeli government, collects testimony from Israeli veterans about the military’s treatment of Palestinians and the influence it says Jewish residents in Yehudah and Shomron have on the army’s actions.

Minister Gabriel said before the cancelation was announced that it would be “a remarkable event, to put it mildly,” if PM Netanyahu called off their meeting.

Speaking later during a meeting with President Reuven Rivlin, Gabriel said: “You can absolutely be sure we are committed to the friendship, the partnership and the special relationship with Israel and nothing will change this.”

Germany sees itself as one of Israel’s closest allies and the cooperation and trade links are extensive, but the legacy of the Nazi-era Holocaust, in which six million Jews were killed during World War II, means their ties are highly charged.

FM Gabriel said it was normal to talk to civil society representatives in Israel, a view that drew expressions of support from Israeli opposition leaders.

“Imagine if the Israeli prime minister … came to Germany and wanted to meet people critical of the government and we said that is not possible…. That would be unthinkable,” Gabriel told Germany’s ZDF channel.

But Environment Minister Ze’ev Elkin, a confidant of PM Netanyahu, told Israel radio it was “unthinkable” for a minister to meet groups working against the country he was visiting.

A spokesman for Breaking the Silence declined to comment on PM Netanyahu’s decision to snub FM Gabriel, or on the details of their planned meeting, which the Peace Now movement said it would also attend along with the B’Tselem rights group.

In February, PM Netanyahu ordered the reprimand of the Belgian ambassador after Belgian Prime Minister Charles Michel met with representatives of Breaking the Silence and B’Tselem during his visit to the region.

Right-wing Israeli politicians accuse the groups of damaging Israel’s reputation abroad and putting Israeli soldiers and officials at risk of prosecution. They also dislike the fact that several of the NGOs receive funds from EU countries.

FM Gabriel, a Social Democrat who has spoken publicly about a rift with his late father, a convinced Nazi, is visiting the Middle East to press for a two-state solution to end the conflict between Israelis and Palestinians.

Germany in March canceled an annual meeting of German and Israeli leaders that was to take place in May amid rising frustration in Berlin with construction in the Jewish communities in Yehudah and Shomron.

In 2016, Israel passed a law requiring nongovernmental organizations that receive more than half their funding from foreign governments or bodies to provide details of their donations. The legislation was largely seen as targeting left-wing organizations such as Breaking the Silence and B’Tselem, and it drew international criticism.