Profits are climbing for companies, and so are their stock prices.

More big businesses joined the earnings parade Tuesday, saying their profits were even larger in the first three months of the year than analysts were expecting, including Caterpillar and McDonald’s. The encouraging reports pushed U.S. indexes to their second straight day of big gains, placing them either close to or firmly in record territory.

The Dow Jones industrial average gained even more due to the big jumps for Caterpillar and McDonald’s, which are among the 30 stocks in the average. The Dow rose 232.23 points, or 1.1 percent, to 20,996.12.

“Earnings have come through quite nicely so far,” said Ernie Cecilia, chief investment officer at Bryn Mawr Trust. “They’re beating forecasts, the numbers have been quite good and this is now the second consecutive quarter that’s happened.” 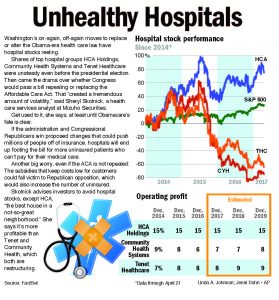 nasAfter struggling for years with a slow global economy and weak oil prices, big U.S. businesses are in the midst of reporting their best quarter of profit growth in years, analysts say.

Many investors say strong profit reports are necessary to justify the big gains stocks have made. Stock prices in recent years have been climbing faster than earnings, which has led skeptics to call the market overly pricey.

Caterpillar soared $7.61, or 7.9 percent, to $104.42 after reporting stronger revenue and profits for the first quarter than analysts expected. It also raised its forecast for full-year results.

And it wasn’t the only big industrial company to cite signs of optimism among customers. 3M said sales improved in all its markets around the world, while reporting stronger quarterly earnings than expected.

Such encouraging talk about the economy’s strength raises hopes that revenues and profits can keep rising for companies, which could rein in worries about stocks being expensive.

McDonald’s jumped $7.47, or 5.6 percent, to $141.70 after likewise surprising investors with better-than-expected results. New items on its menu helped it to drive sales at its U.S. restaurants.

Ryder System was among the relatively few stocks to fall on Tuesday. It lost $11.00, or 13.9 percent, to $68.28 after weaker-than-expected rental demand pushed it to report lower quarterly results than analysts had forecast.

Slightly more than two stocks rose for every one that fell on the New York Stock Exchange.

Even with so many corporate earnings reports on the docket, politics is still at center stage for stocks as well.

Global markets added to big gains made on Monday, when markets soared after results from the first round of France’s presidential election raised expectations that the European Union and the euro currency will remain intact.

In the U.S., one of the main reasons for the stock market’s strong ascent since November is excitement about the prospect for lower taxes for businesses.

President Donald Trump is expected to unveil details of his tax plan on Wednesday, including a cut in the corporate tax rate to 15 percent from 35 percent.

Investors, though, have grown more skeptical about the ability for Republicans in Washington to push through big change following their stumbles in overhauling the nation’s health care system. If a corporate tax cut does occur, it would likely help lift companies’ profits — and stock prices — even further.

Interest rates continued to climb from the low they set in the middle of the month. The yield on the 10-year Treasury rose to 2.33 percent from 2.27 percent late Monday. It was 2.17 percent a week ago.