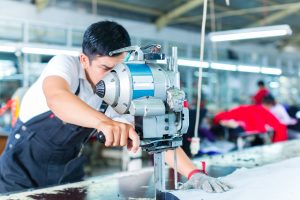 Brooklyn may be New York’s hippest borough to live or start a business. It just doesn’t hold that much cachet for the city’s fashion industry.

Mayor Bill de Blasio says he wants to provide apparel makers affordable space to grow by luring them out of midtown Manhattan’s garment district and into cheaper, city-owned warehouses in Brooklyn. As part of his plan, the city would end a 1987 zoning law that has protected manufacturing use and limited office space in the district.

Manhattan clothing makers, designers and merchants are not on board. They say their proximity to each other is what makes the business thrive. Without it, they say, there would be no New York Fashion Week, that injects $900 million into the city’s economy twice a year.

“If you start paying people to move to Brooklyn you’re going to destroy an eco-system that is crucial to New York,” said Manhattan Borough President Gale Brewer. “If it goes, it hurts Broadway’s costume makers, the design community, the mom-and-pop button and fabric shops.”

New York’s garment district — a 12.5-block swath bounded by Broadway and Ninth Avenue between 35th and 40th Streets — was once the heart of the industry in a city that made about 90 percent of U.S. clothing in the 1950s. Today, it’s less than 1 percent, after cheaper overseas labor and rising rents forced many factories to close.

The number of garment workers has fallen to about 16,000 today from a peak of 335,000. Despite the decline, the fashion industry remains a crucial part of New York’s economy, employing more than 180,000 people in jobs from retail to advertising to design. It generates more than $2 billion in tax revenue, according to the city’s Economic Development Corp., a semi-public agency that has been promoting the Brooklyn move.

Amid factory vacancies, the district began to house more non-profits and tech start-ups. Lax enforcement of the 1987 zoning rule hastened that trend, yet the law still inhibits landlords from forcing out apparel makers, said Wally Rubin, executive director of Community Board 5, which reviews land use in the area.

Administration officials didn’t disclose their zoning-change plan to the board, the manufacturers or the workers until last month, days before they intended to ask the City Council for approval. That move has been postponed indefinitely.

“It was a little foolish to do that without being more inclusive,” Rubin said.

Joe Ferrara, who represents 120 manufacturers as chairman of the Garment Center Supplier Association, says the de Blasio administration doesn’t get that Manhattan’s survivors of the industry’s decline need to stay put.

While most of the big fashion brands headquartered in New York have mass production facilities in Asia, brands such as Ralph Lauren and Calvin Klein contract with Manhattan’s garment factories to sew limited-run designer gowns and suits that sell for thousands of dollars, Ferrara said.

Ferrara’s group has asked the city to consider an alternative plan that he says would save manufacturing in Manhattan by reserving at least 500,000 square feet in the garment district for them. The group would invest $65 million to buy space inside the neighborhood in the form of long-term leases restricted for manufacturing, if the city would agree to invest $187.5 million, he said.

About 100 companies already operate in Brooklyn’s Sunset Park neighborhood, where de Blasio wants to invest $236 million to renovate and offer 700,000 square feet of industrial space in two buildings, with five-to-10-year leases at $16 to $25 per square foot. Rents in Manhattan’s garment center average $30 to $40 per square foot, Ferrara said. De Blasio also wants to spend another $51 million over several years for job training and relocation aid.

While Brooklyn may have already attracted successful manufacturers of sportswear, military uniforms or other mass-produced clothing, they don’t do the kind of highly skilled sewing and cutting that characterizes firms in Manhattan’s Fashion District, said Ann Hould-Ward.

“We need these businesses close to us,” she said.

Edgar Romney, secretary-treasurer of Workers United SEIU, which represents about 800 garment workers, said de Blasio’s Brooklyn proposal would extend many members’ commutes and force them to walk long distances to the subway.

“Our members who live in Queens, the Bronx, New Jersey and Manhattan, many of them are elderly women,” he said. “It would be a major hardship.”

De Blasio, 55, who faces re-election this year, says he understands the industry’s importance as an immigrant gateway to the middle class. His grandmother opened an embroidery shop in the garment district more than 100 years ago. Back then it created jobs for Italians and Jews; now it employs thousands of Latinos and Asians.

The mayor has increased city funding for the Fashion Institute of Technology, which is part of the state university system, and awarded almost $5 million of loans and grants to fashion-related businesses. His Brooklyn proposal will stop the industry’s decline, he says.

The Garment Center Alliance, the area’s landlord-dominated business improvement district, is so enthusiastic about the proposal that it plans to assess its member businesses an extra $2.5 million a year for 10 years to help pay manufacturers to move out of the neighborhood.

“The only long-term solution is in using city-owned assets,” said James Patchett, president of the Economic Development Corp. “Privately owned buildings will always be subjected to the vagaries of the real estate market.”