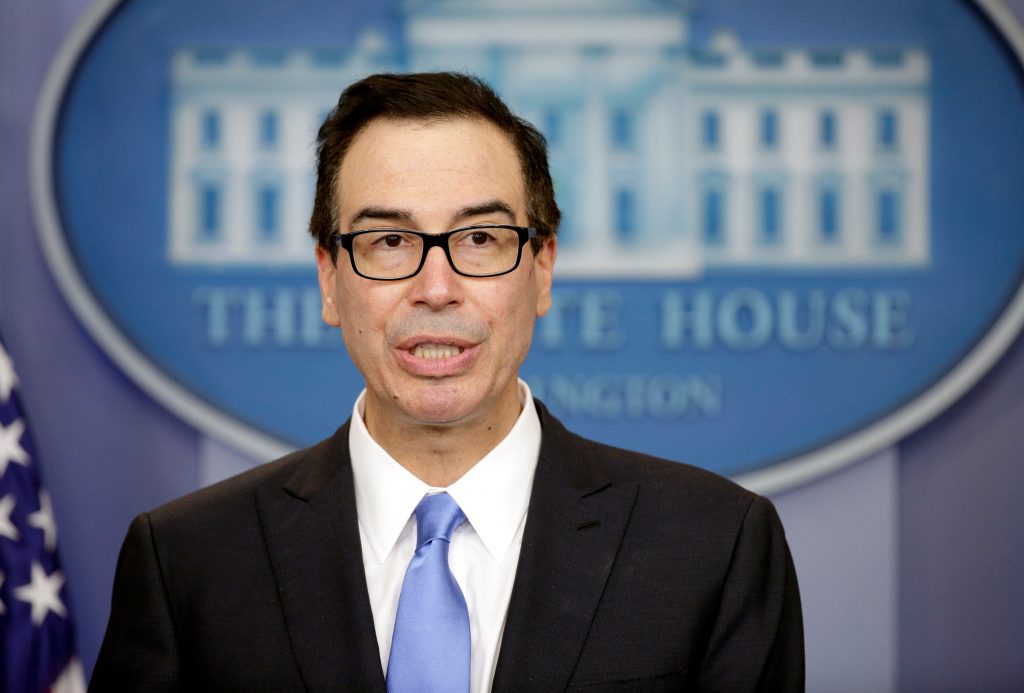 The sanctions target employees of Syria’s Scientific Studies and Research Center, which the U.S. says partly enables the use of chemical weapons. The U.S. has blamed Assad for an attack earlier this month that killed more than 80 civilians in rebel-held northern Idlib.

“The United States is sending a strong message with this action: That we will not tolerate the use of chemical weapons by any actor,” Treasury Secretary Steve Mnuchin told reporters at the White House Monday. He said it was one of the largest such sanctions actions in U.S. history.

President Donald Trump has called Assad “evil” and said his use of chemical weapons “crossed a lot of lines.”

Assad has strongly denied he was behind the attack, in which sarin gas was allegedly used.

As a result of Monday’s action, any property or interest in property of the individuals sanctioned must be blocked, and U.S. persons are generally prohibited from dealing with them.

As Trump dined this month with China’s President Xi Jinping during their highly anticipated summit at Trump’s Florida resort, word emerged that Trump took action against Assad by launching missiles against a Syrian airfield. The retaliation was seen as somewhat unexpected for a president that vowed to stay out of lingering wars and conflicts overseas.

This month, Russia vetoed a Western-backed U.N. resolution that would have condemned the reported use of chemical weapons in Syria and demanded a speedy investigation into the attack. China abstained for the first time; a move the White House billed a win for their efforts to isolate Russia.

“On Syria, the Council failed again this month to respond to Syria’s use of chemical weapons,” Trump said Monday at a White House meeting of U.N. ambassadors from countries on the Security Council. “A great disappointment. I was very disappointed by that.”

The U.S. has gradually been expanding its sanctions program against Syria since 2004, when it issued sanctions targeting Syria for a range of offenses, including its support of terrorism, as well as its occupation of Lebanon, efforts to undermine stability in Iraq and pursuit of weapons of mass destruction.

More recently, sanctions were expanded in connection with its civil war, now in its sixth year, to target offenses linked to the ongoing violence and human rights abuses.

The U.S. has also issued sanctions for foreign individuals or companies that support Assad’s government. A number of Iranian entities have been penalized for supporting the Syrian government or fighters working to undermine peace in Syria.

While Moscow and Washington are continuously at odds over Syria, the U.S. has not imposed any Syria-related sanctions on Russia.