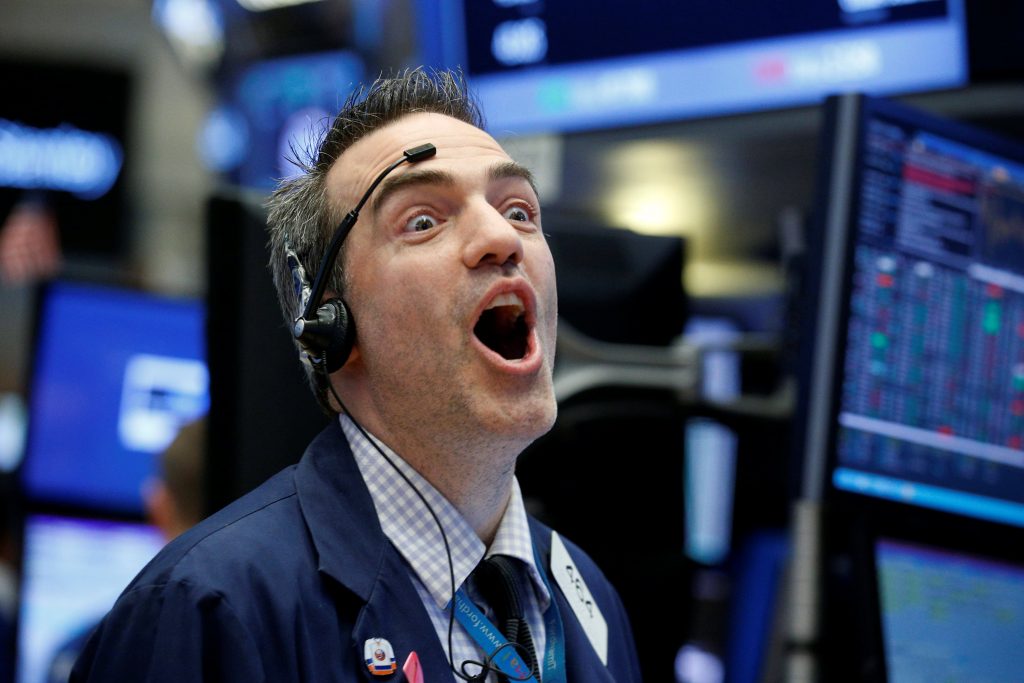 U.S. stocks joined a worldwide rally Monday after the first round of France’s presidential election raised expectations that the European Union will hold together. A candidate seen as pro-business won the most votes Sunday, and many investors expect him to win a runoff against the remaining anti-EU candidate, which is set for May 7.

Prices for gold, Treasurys, and other investments that signal fear in the market all sank, while the euro’s value rose against the dollar.

The gains were widespread. Five stocks rose for every two that fell on the New York Stock Exchange.

TRIOMPHE: Coming into Sunday’s presidential election in France, several candidates railed against the European Union, one of the world’s dominant trading partners. A victory for one of those candidates would have followed the path set by last year’s vote in the United Kingdom to exit the European Union and the U.S. election of President Donald Trump as a kick in the face to the globalist, free-trade worldview.

Emmanuel Macron, a candidate investors see as pro-business, won the most votes in Sunday’s election. He will face Marine Le Pen in a runoff election in two weeks. Le Pen is one of the candidates who campaigned against the European Union, but many investors expect Macron ultimately to be victorious.

“It’s not only France” where the forces of populism seem to be waning, said Luca Paolini, chief strategist at Pictet Asset Management, a U.K.-based firm that manages $165 billion in client assets. He pointed to the Dutch elections last month, where a candidate who ran on the pledge to pull the Netherlands from the European Union, lost.

“This surge is fading,” Paolini said. “Maybe it’s too early to celebrate, but that’s what the market is pricing in.”

Paolini cautioned that political risks still remain: Not only is there the runoff election for France in coming weeks, but there is also the parliamentary election in June. And other elections may loom even larger for the future of the European Union, such as next year’s Italian vote.

EUROPE RIDING HIGH: France’s CAC 40 index jumped 4.1 percent and at one point touched its highest level since the start of 2008. Germany’s DAX gained 3.4 percent, and the FTSE 100 in London rose 2.1 percent.

FEELS CALM: Many investors see the Vix index as a measure of the market’s anxiety level because it shows how expensive prices are to buy protection against upcoming drops in stocks. The Vix plunged 15 percent.

Demand for other investments that investors flock to when they’re fearful also fell. The price of gold fell $11.60 to settle at $1,277.50 per ounce.

Prices for Treasury bonds dropped, which sent yields higher. The yield on the 10-year Treasury climbed to 2.27 percent from 2.25 percent late Friday.

Financial stocks in the S&P 500 jumped 2.2 percent, by far the biggest gain among the 11 sectors that make up the index. Bank of America surged 4.2 percent, JPMorgan Chase rose 4 percent and SunTrust Banks gained 3.4 percent.

EARNINGS: Companies are in the midst of reporting their results for the first three months of the year, and analysts expect this to be the strongest showing in years.

Hasbro jumped $6.16, or 6.4 percent, to $102.19 after reporting stronger quarterly revenue and profits than analysts had forecast. Illinois Tool Works rose $5.33, or 4 percent, to $140.20 after also surprising analysts with a better-than-expected quarter.

EURO RISING: With expectations strengthening that the shared European economy will remain intact, the euro rose to $1.0848 from $1.0695 late Friday.

CHINA BLUES: Chinese stocks didn’t join the global wave higher on Monday. Benchmarks in Shanghai and Shenzhen fell by more than 1 percent in their worst losses in four months after regulators warned over the weekend of risks in the financial industry. The Chinese Insurance Regulatory Commission, in a notice carried by the state-run Xinhua News Agency, ordered insurers to improve risk controls amid a crackdown on misuse of capital.