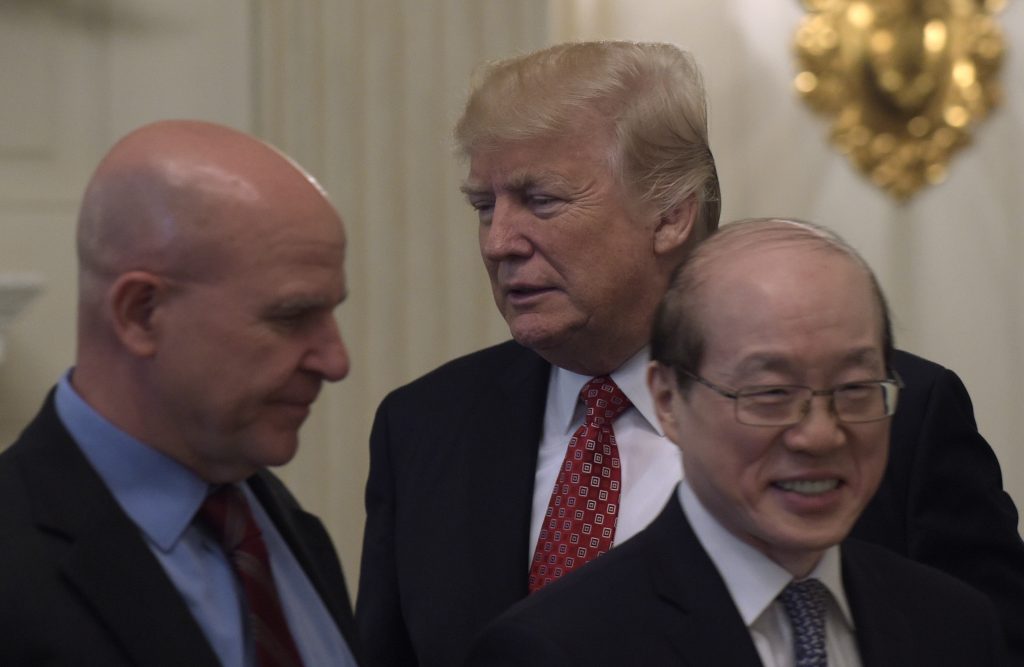 President Donald Trump said on Monday that the U.N. Security Council must be prepared to impose new sanctions on North Korea, amid escalating tensions over its missile and nuclear programs, saying people had acted as if “blindfolded” for decades to a big problem that finally needed to be solved.

“The status quo in North Korea is also unacceptable,” Mr. Trump told a meeting of U.N. Security Council ambassadors at the White House, held at a time of mounting concern that North Korea may be preparing a sixth nuclear bomb test.

“The council must be prepared to impose additional and stronger sanctions on North Korean nuclear and ballistic missile programs,” Mr. Trump said.

“This is a real threat to the world, whether we want to talk about it or not. North Korea is a big world problem and it’s a problem that we have to finally solve,” he said. “People put blindfolds on for decades and now it’s time to solve the problem.”

Mr. Trump gave no indication as to when new sanctions should be imposed on North Korea. U.S. officials say his administration has been debating whether they should be held as response to any new North Korean missile or nuclear test, or imposed as soon as they can be agreed.

Angered by the approach of the USS Carl Vinson carrier group, a defiant North Korea, which has carried on nuclear and missile tests in defiance of successive rounds of U.N. sanctions, said on Monday the deployment was “an extremely dangerous act by those who plan a nuclear war to invade”.

“The United States should not run amok and should consider carefully any catastrophic consequence from its foolish military provocative act,” Rodong Sinmun, the official newspaper of the North’s ruling Workers’ Party, said in a commentary on Monday.

Two Japanese destroyers have joined the carrier group for exercises in the western Pacific, and South Korea said on Monday it was also in talks about holding joint naval exercises.

Worry that North Korea could be preparing to conduct another nuclear test or launch more ballistic missiles has increased as it prepares to celebrate the 85th anniversary of the foundation of its Korean People’s Army on Tuesday.

It has marked similar events in the past with nuclear tests or missile launches.

Mr. Trump has vowed to prevent North Korea from being able to hit the United States with a nuclear missile and has said all options are on the table, including a military strike.

China is North Korea’s sole major ally but it has been angered by its nuclear and missile programs and is frustrated by its belligerence.

China has repeatedly called for the denuclearization of the Korean peninsula and is worried the situation could spin out of control, leading to war and a chaotic collapse of its isolated, impoverished neighbor.

In his phone call with Mr. Xi, Mr. Trump criticized North Korea’s “continued belligerence” and emphasized that its actions “are destabilizing the Korean peninsula,” the White House said.

“The two leaders reaffirmed the urgency of the threat posed by North Korea’s missile and nuclear programs, and committed to strengthen coordination in achieving the denuclearization of the Korean peninsula,” it said.

China “hopes that all relevant sides exercise restraint, and avoid doing anything to worsen the tense situation”, the Chinese ministry said in a statement, paraphrasing Mr. Xi.

The call between the presidents was the latest manifestation of their close communication, which was good for their countries and the world, a Chinese foreign ministry spokesman said.

U.S. ambassador to the United Nations Nikki Haley, speaking on NBC, said that the United States and the international community were maintaining pressure on North Korean leader Kim Jong Un but were “not trying to pick a fight with him.”

Asked whether a preemptive strike was under consideration, she said: “We are not going to do anything unless he gives us reason to do something.”

“If you see him attack a military base, if you see some sort of intercontinental ballistic missile, then obviously we’re going to do that. But right now, we’re saying ‘don’t test, don’t use nuclear missiles, don’t try and do any more actions’, and I think he’s understanding that. And China’s helping really put that pressure on him.”

“We agreed to strongly demand that North Korea, which is repeating its provocation, show restraint,” Mr. Abe later told reporters. “We will maintain close contact with the United States, keep a high level of vigilance and respond firmly.”

Later Monday, Mr. Trump also spoke by phone with German Chancellor Angela Merkel to discuss the “urgent security challenge” posed by North Korea, the White House said. Mr. Trump and Chancellor Merkel also discussed Syria and Yemen, and the need for a peaceful settlement to the conflict in Ukraine.

Envoys on the North Korean nuclear issue from the United States, South Korea and Japan are due to meet in Tokyo on Tuesday.

The U.S. government has not specified where the carrier strike group is but U.S. Vice President Mike Pence said on Saturday it would arrive “within days”.

South Korean Defense Ministry spokesman Moon Sang-gyun gave no details about plans to join the U.S. carrier group for exercises, but said Seoul was holding discussions with the U.S. Navy.

South Korean and U.S. officials have feared for some time that North Korea’s sixth nuclear test could be imminent.

However, the group said it was unclear whether the site was in a “tactical pause” before another test or was carrying out normal operations.

Adding to the tension, North Korea detained a U.S. citizen on Saturday as he attempted to leave the country.