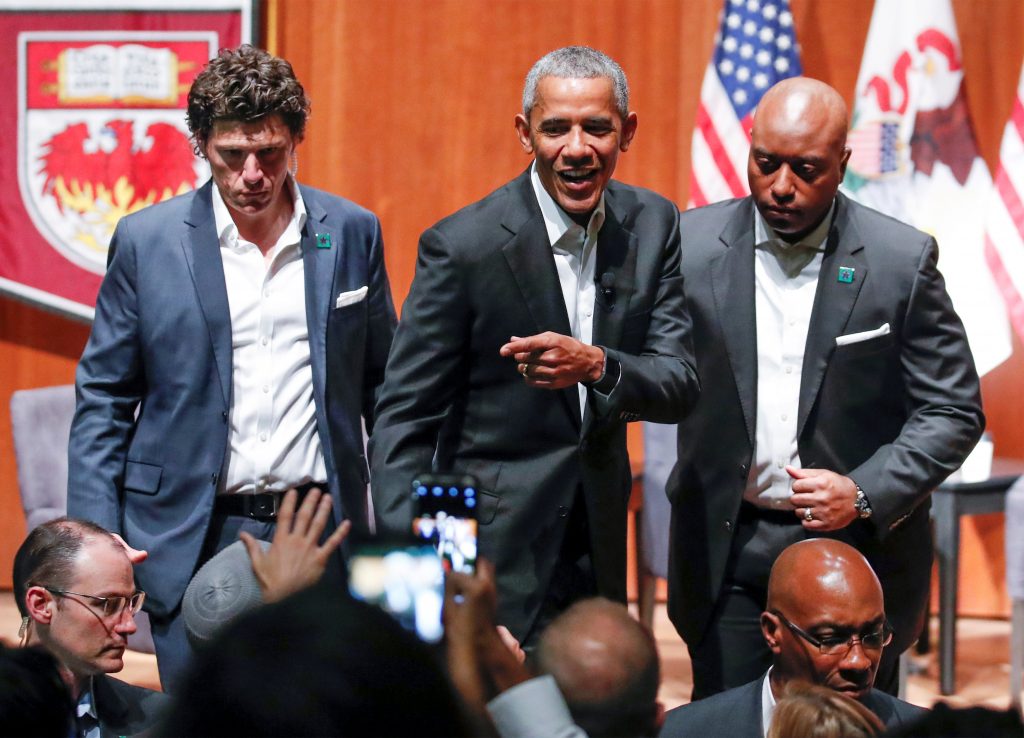 President Barack Obama lifted the veil on his retirement Monday at a University of Chicago forum, engaging students with a message calling on them to use empathy and listen to those with whom they disagree.

“I have to say that there’s a reason why I’m always optimistic when things look like they’re sometimes not going the way I want. And that is because of young people like this,” Obama said in wrapping up the 80-minute forum, the closest he came to addressing his successor, President Donald Trump.

Indeed, there were no direct references to Trump, the Republican-controlled Congress or the continued attempts to repeal and replace his signature Affordable Care Act, also known as Obamacare, or a host of executive orders the new president has used to overturn Obama policies.

Instead, the discussion with six younger people, including four students, featured Obama largely delivering bromides from a historical perspective of his years as an organizer, state senator, U.S. senator and president.

“I am the first to acknowledge I did not set the world on fire, nor did I transform these communities in any significant way,” he said of his days as a community organizer on the South Side.

“But it did change me. This community gave me more than I was able to give in return. This community taught me that ordinary people, when working together, can do extraordinary things,” he said.

Of his organizing days, Obama said it was important to spend time “listening and finding out what they’re interested in and connecting their immediate needs to policies that have influence on their immediate concerns.”

“Listen to understand rather than listen to respond. That will save you a lot of heartache and grief,” said Obama, who added that it was a lesson he learned in marriage.

Obama also counseled students who have an interest in politics to be careful about their use of social media, but also to “own” any mistakes the unforgiving medium may show from their past.

“If you had pictures of everything I did in high school, I probably wouldn’t be president of the United States,” he said.

It was Obama’s first public visit to Chicago, his adopted hometown, since he delivered a presidential farewell address at McCormick Place in January, just days before his two terms in the White House ended.

And it was Obama’s first public event since leaving office Jan. 20, ending a three-month vacation that included jaunts to foreign lands and launching a series of talks and paid speeches and appearances both in the U.S. and internationally.

His visit also comes just days before his successor ends his first 100 days in office, a symbolic deadline Trump has both ridiculed and set as a schedule for his administration’s first major accomplishments.

At Monday’s event, called a “Conversation on Civic Engagement,” Obama spoke with six young people on the stage of an auditorium at the university’s Logan Center for the Arts. Civic engagement and efforts to end bipartisan gridlock had been hallmarks of his speeches during his final months in office.