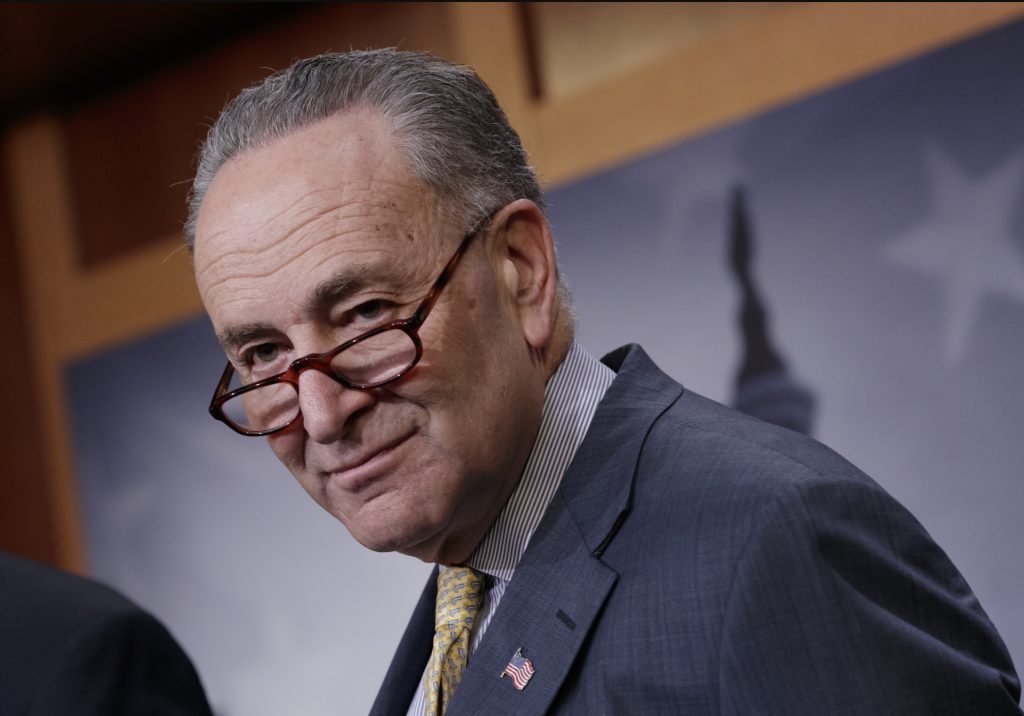 President Donald Trump could avert the risk of a government shutdown next weekend by stepping back from his demand that lawmakers fund his promised border wall with Mexico in a must-pass spending bill, Congress’ two top Democrats said Monday.

“If the president stepped out of it, we could get a budget done by Friday,” Senate Minority Leader Chuck Schumer, D-N.Y., said Monday in a conference call with reporters, referring to Democratic and Republican budget negotiators.

House Minority Leader Nancy Pelosi, D-Calif., agreed. She said that while Mr. Trump had promised during his campaign to build the barrier, “He did not promise that he would take food out of the mouths of babies” and cut programs for seniors, education and the environment to pay for it. She called the border wall an “immoral, ineffective, unwise proposal.”

Democrats timed their call to mark the 100th day of Mr. Trump’s presidency, which falls next Saturday. They said that Mr. Trump has repeatedly broken his campaign promises to help working-class Americans, and cited a GOP health care bill that Nancy Pelosi called “a moral monstrosity,” proposed cuts in domestic programs and a failure to advance tougher trade policies.

Saturday is the same day the government will run out of money unless lawmakers pass legislation financing federal agencies.

White House officials and leaders of both parties have said they don’t want a government shutdown. But administration officials have continued to demand that lawmakers include money for the border wall in the spending bill, and the proposal has emerged as the biggest stumbling block to a budget agreement.

“Instead of risking a government shutdown by shoving this wall down Congress’ and the American people’s throats, the president ought to just let us come to an agreement,” said Sen. Schumer.

Mr. Trump said during his campaign that Mexico would pay for the structure, estimated to cost perhaps tens of billions of dollars. Mexican officials have refused, so the White House is seeking taxpayer money for the down payment to begin construction.

In a tweet Monday, Mr. Trump said his proposed border wall would be “a very important tool in stopping [illegal substances] from pouring into our country and poisoning our youth (and many others)!”

Over the weekend, he tweeted, “Eventually, but at a later date so we can get started early, Mexico will be paying, in some form, for the badly needed border wall.”

To mark his 100th day in the White House, Mr. Trump has announced a rally in Pennsylvania that day.

Despite Mr. Trump’s dismissal that the 100-day marker is “artificial,” the White House has packed his schedule for Monday. Mr. Trump will sign executive orders on energy and rural policies, meet with the president of Argentina and travel to Atlanta for a National Rifle Association event. Top aides will also fan out around the country to promote the administration.

Mr. Trump also plans to outline an ambitious tax cut plan on Wednesday, telling The Associated Press last week that it would include a “massive” tax break for both individuals and corporations.

Mr. Trump would like to revive a failed effort by House Republicans to replace the Affordable Care Act, or “Obamacare.” He also hopes to use the $1 trillion catchall spending bill to salvage victories on his promised border wall, a multibillion-dollar down payment on a Pentagon buildup, and perhaps a crackdown on cities that refuse to cooperate with immigration enforcement by federal authorities.

So far, negotiations have proven difficult, with disputes over the border wall and health law subsidies to help low-income people afford health insurance. House members received little information from leaders on a conference call this past Saturday.

White House chief of staff Reince Priebus said on NBC’s “Meet the Press” that he’s confident the spending bill will include something “satisfactory” to reflect Mr. Trump’s desire to build a border wall. The legislation would keep the government running through Sept. 30, the end of the fiscal 2017 budget year.

“We expect the priorities of the president to be reflected,” Mr. Priebus said, citing ongoing talks with the House and the Senate. “It will be enough in the negotiation for us to move forward with either the construction or the planning, or enough for us to move forward through the end of September to get going on the border wall and border security.”

Mr. Trump has repeatedly asserted that Mexico would pay for the border wall, which he says is necessary to stop the flow of immigrants crossing the border illegally, as well as drug smugglers.

On Obama’s health law, Priebus said he’d like to have a vote on the GOP repeal-and-replace bill in the House this week. But he insisted it didn’t make too much difference to the White House whether the vote came “Friday or Saturday or Monday.”