Israel PM Netanyahu to Germany: No Help Needed to Set Up Summit With PA
Israel 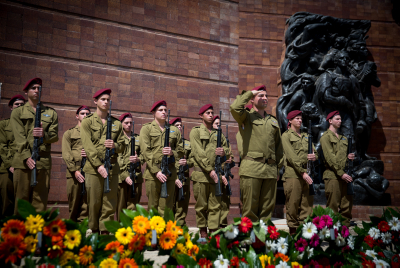 On the eve of Holocaust Memorial Day, Prime Minister Binyamin Netanyahu informed the German government that its services in hosting or sponsoring talks between Israel and the Palestinian Authority were not needed. German media on Monday reported the substance of Netanyahu’s message, which was sent Sunday evening.

According to the reports, Germany has been pressuring Israel to enter into a new round of talks with the Palestinians, and has criticized the recent relaxation of barriers to building in Yehudah and Shomron. Several weeks ago, Germany, along with France and Britain, condemned the government’s decision to establish a new settlement for Amona evacuees, with a German Foreign Ministry official saying that Berlin “expects the Israeli government to clarify which solution they are pursuing for a lasting peace with the Palestinians. Germany will not recognize any change in the 1967 lines which has not been agreed upon between the parties.”

A German report also said that a meeting between Netanyahu and German Chancellor Angela Merkel was “postponed” as part of Berlin’s protests against the Settlement Arrangements Law, which will allow the government to compensate Arabs who claim ownership of land on which Jewish homes in Yehudah and Shomron are built.

Netanyahu’s message came on the eve of a visit to Israel by newly-appointed German Foreign Minister Sigmar Gabriel. Speaking earlier Sunday, Gabriel said that “our solidarity with Israel also means working to ensure that Israel and Palestine can live side by side in dignity and peace. Only a two-state solution will be sustainable.”

In the past, Gabriel has gone so far as to call Israel an “apartheid state” over what he said were “discriminatory policies” against Palestinians. He is considered to be one of the prime movers in the German government for a renewed role for Germany and Europe in the Middle East crisis, especially given the vacuum left by the United States, which under President Donald Trump has so far taken a hands-off approach, if not favoring Israel and its settlement policies.

Gabriel attended an official Holocaust Memorial Day ceremony at Yad Vashem, and is to meet with Netanyahu and foreign affairs and defense officials Tuesday.

An Israeli government official quoted in Yisrael Hayom said that there was no need to make too much of Netanyahu’s message. “We simply informed them that we are quite familiar with the Palestinians’ demands, and what it would take to get them back to the negotiating table. Setting up meetings is not the issue.”