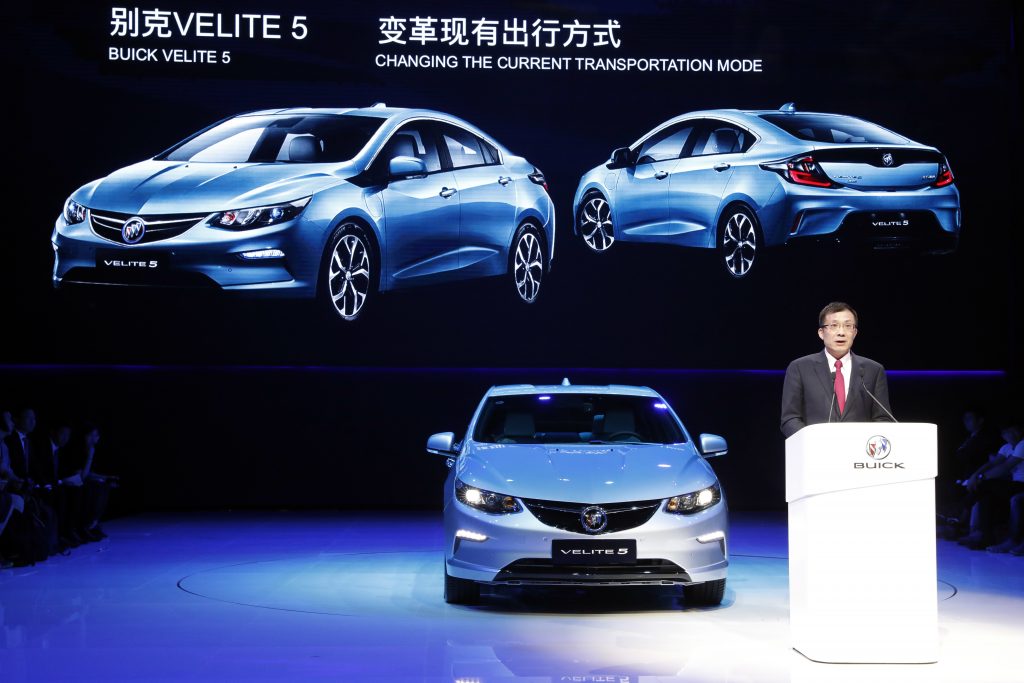 General Motors Co. plans to launch ten electric and gasoline-electric hybrid vehicles in China by 2020, an executive said Friday, as automakers speed up the rollout of alternative vehicles under pressure from Beijing to promote the industry.

GM will start production of a pure-electric model in China within two years, Matt Tsien, president of GM China, told a news conference during the Shanghai auto show. He said GM expects annual sales of 150,000 electric and hybrid cars in China by 2020 and possibly in excess of 500,000 by 2025.

Ford Motor Co., Volkswagen AG, Nissan Motor Co. and other automakers also have announced aggressive plans to make and sell electric vehicles in China, the biggest auto market by number of units sold. On Tuesday, GM unveiled a hybrid version of the Chevrolet Volt to be manufactured in China and sold under its Buick brand.

China’s communist government has the world’s most ambitious electric car goals, hoping both to clean up smog-choked cities and to take a lead in an emerging industry. Regulators are pressing foreign brands to help develop the industry.

Regulators jolted the industry by proposing a requirement that electrics account for at least 8 percent of each brand’s production by next year, rising to 10 percent in 2019 and 12 percent in 2020. Automakers say they may be unable to meet those targets and regulators have suggested they might be reduced or postponed.

Beijing also is due to enforce what auto executives say are the world’s most stringent emissions standards. They say that is likely to require all manufacturers to include electrics in their lineup to meet targets for average fleet emissions.

“In the next several years, out to 2020, we expect to launch at least ten new energy vehicles into the marketplace,” said Mr.Tsien, using the government’s term for electric and hybrid vehicles. “We have a pipeline that is going to materialize, that’s going to put us in a very good position from a fuel economy requirement perspective.”

All the vehicles will be manufactured in China, he said.

GM, which competes with VW for the status of China’s top-selling automaker, reported 2016 sales rose 7.1 percent to a record 3.9 million vehicles.

Foreign automakers had been reluctant to sell electric cars in China because regulators required them to transfer valuable intellectual property to local partners or face import duties of 25 percent even if the vehicles were produced at a Chinese factory. Beijing has eased those requirements in an effort to attract foreign participants, though automakers say the final ground rules for electric vehicle production have yet to be announced.

“We have no concerns relative to [the] amount of IP that has to be shared. We have a fairly clear understanding of what the rules of engagement are,” said Tsien. “For vehicles where General Motors owns the IP, we have had longstanding technology licensing agreements with our partner. Those work effectively.”

The government is expanding China’s network of charging stations to reduce “range anxiety,” or buyers’ fear of running out of power. The Cabinet’s planning agency announced a goal in February of having 100,000 public charging stations and 800,000 private stations operating by the end of this year.

Electric cars also are exempt from sales tax and license plate quotas Beijing, Shanghai and other cities use to curb congestion and smog. Still, sales of electric and gasoline-electric hybrids fell 4.4 percent from a year earlier in the first quarter to 55,929 vehicles while SUV purchases rose 21 percent to 2.4 million.

Tsien said manufacturers will need to develop vehicles that appeal to customers.

“The industry has to work on very hard to educate customers with regard to the merits,” he said.