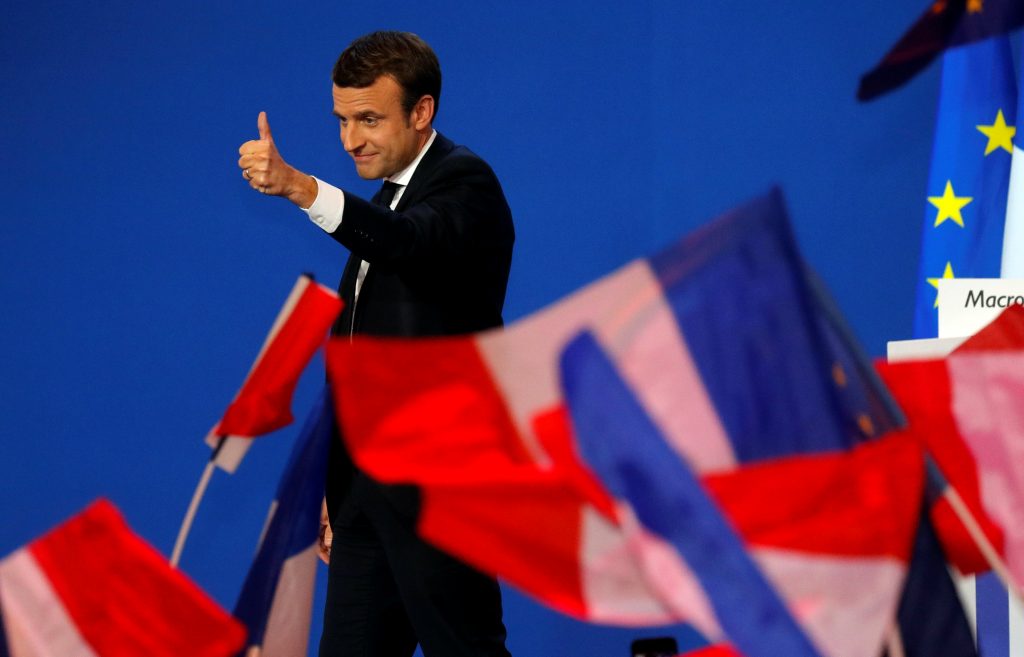 Centrist Emmanuel Macron and far-right leader Marine Le Pen are set to face each other in a May 7 runoff for the French presidency after coming first and second in Sunday’s first round of voting, according to multiple projections.

Though Macron, 39, is a comparative political novice who has never held elected office, opinion polls in the run-up to the ballot have consistently seen him easily winning the final clash against the 48-year-old Le Pen.

Sunday’s outcome spells disaster for the two mainstream groupings that have dominated French politics for 60 years, and also reduces the prospect of an anti-establishment shock on the scale of Britain’s vote last June to quit the EU and the election of Donald Trump as U.S. president.

The euro currency was quoted higher immediately after the first projections were issued, with banks quoting around $1.092 versus $1.072 on Friday evening, according to Reuters data.

In a race that was too close to call up to the last minute, Macron, a pro-European Union ex-banker and economy minister who founded his own party only a year ago, was projected to get 24 percent of the first-round vote by the pollster Harris, and 23.7 percent by Elabe.

Le Pen, leader of the anti-immigration and anti-EU National Front, was given 22 percent by both institutes. At least three further pollsters all projected broadly similar results.

Macron’s supporters, gathered at a Paris conference center, burst into singing the national anthem, the Marseillaise, a few seconds after results came through. Many were under 25, reflecting some of the appeal of a man aiming to become France’s youngest head of state since Napoleon.

Le Pen, who is herself bidding to make history as France’s first female president, follows in the footsteps of her father, who founded the National Front and reached the second round of the presidential election in 2002.

Jean-Marie Le Pen was ultimately crushed when voters from right and left rallied around the conservative Jacques Chirac in order to keep out a party whose far-right, anti-immigrant views they considered unpalatably xenophobic.

His daughter has done much to soften her party’s image, and found widespread support among young voters by pitching herself as an anti-establishment defender of French workers and French interests.

“The great issue in this election is the rampant globalization that is putting our civilization at risk,” she declared in her first statement after results came through.

Nevertheless, Le Pen seems destined to suffer a similar fate to her father.

Harris gave both Fillon, badly damaged by allegations that his wife had been paid from the public purse for work she did not do, and far-left contender Jean-Luc Melenchon 20 percent in the first round.

“This defeat is mine and it is for me and me alone to bear it,” Fillon told a news conference, adding that he would now vote for Macron.

The result will mean a face-off between politicians with radically contrasting economic visions for a country whose economy lags behind that of its neighbors and where a quarter of young people are unemployed.

Macron favors gradual deregulation measures that will be welcomed by global financial markets, as well as cuts in state expenditure and the civil service. Le Pen wants to print money to finance expanded welfare payments and tax cuts, ditch the euro currency and possibly pull out of the EU.

Whatever the outcome on May 7, it will mean a redrawing of France’s political landscape, which has been dominated for 60 years by mainstream groupings from the center-left and center-right, both of whose candidates faded.

Macron ally Gerard Collomb said the defeat of the mainstream center-left Socialists and the center-right Republicans showed a “deep malaise” in French society.

The final outcome on May 7 will influence France’s standing in Europe and the world as a nuclear-armed, veto-wielding member of the U.N. Security Council and founding member of the organization that transformed itself into the European Union.