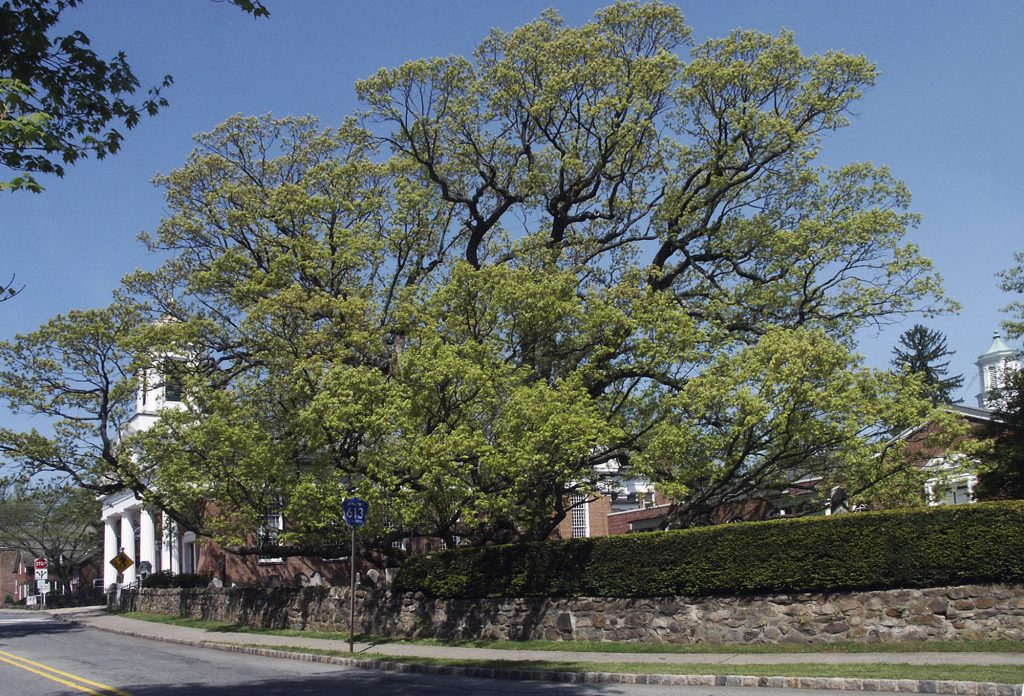 For hundreds of years, an imposing white oak tree has stood over a New Jersey community, providing protection from the blazing summer sun, serving as a scenic backdrop for thousands of photos and, according to legend, was a picnic site for George Washington.

But the tree, believed to be among the oldest in the nation, is not long for its place in the Bernards church graveyard that it’s called home for 600 years. Crews are due to begin removing the tree Monday.

The two to three days of chopping and pulling will draw attention from residents of a bedroom community about 30 miles west of New York that has long celebrated its white oak. It’s been the place to go for formal photos, a landmark for driving directions and a remarkable piece of natural history.

“I know it seems funny to some to mourn a tree, but I’m really going to miss seeing it,” said Bernards resident Monica Evans, recalling family photos during religious events.

Arborists say the tree had stood for nearly 300 years before the church was built in 1717. It stands about 100 feet tall, has a trunk circumference of 18 feet and has a branch spread of roughly 150 feet. Officials say the crews plan to initially remove the large limb segments until there is a large trunk section still standing, then remove that section in one piece.

The tree was declared dead after it began showing rot and weakness in the last couple of years, likely due to its age. Arborists determined it wouldn’t be able to withstand many more harsh winters or spring storms.

Among its notable visitors was Gen. George Washington, who town officials say picnicked at the tree with the Marquis de Lafayette. The Rev. George Whitefield also preached to more than 3,000 people beneath the tree in 1740.

“It has been an integral part of the town, that’s for sure,” said Jon Klippel, a member of the church’s planning council. “It has always been there, even before there was a town, and over the years many people have met there, been photographed there, had a meal under the tree. We’ve been blessed to have it here.”

The tree’s pending removal is a reminder of how older trees are starting to become less common across the nation.

Experts say fewer trees are replicating the old oak’s 600-year lifespan. They note that several factors — including droughts, intensive wildfires and invasive insects — can greatly harm trees, which become more susceptible to damage as they age.

“Research shows that older trees are dying off at alarming rates,” said Ian Leahy, director of urban forest programs for the Washington-based conservation group American Forests. He says the problem can be mitigated in part if people and communities care for the trees and monitor their health.

“People connect with older trees, they become a symbol to the community, and arborists go to great lengths to keep them well,” Leahy said. “It’s also important to protect vulnerable species, since trees can store big amounts of carbon and larger trees can help protect other species.”

While the tree is being removed, its legacy will continue at the church.

Another white oak, cultivated from the old tree’s acorns, was recently planted on another part of the church property. It now stands about 20 feet tall.