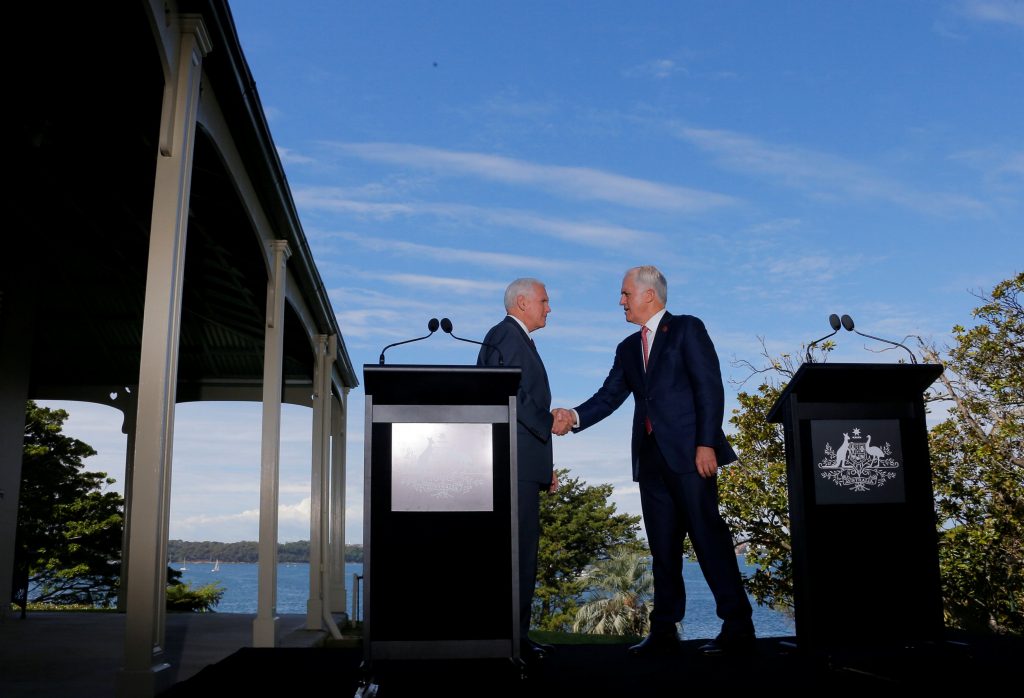 South Korea is on heightened alert ahead of another important anniversary in the reclusive North that could be the trigger for a new nuclear test or launch of ballistic missiles, with a large concentration of military hardware massed on both sides of the border.

President Donald Trump has vowed to prevent North Korea from being able to hit the United States with a nuclear missile but his deputy said in Sydney on Saturday a peaceful outcome was still achievable because of warming ties between Beijing and Washington.

“We truly believe that, as our allies in the region and China bring that pressure to bear, there is a chance that we can achieve a historic objective of a nuclear-free Korean peninsula by peaceful means,” Pence said.

“We are encouraged by the steps that China has taken so far,” he said at a joint news conference with Australian Prime Minister Malcolm Turnbull.

Earlier this week, Trump praised Chinese efforts to rein in “the menace of North Korea” after North Korean state media warned the United States of a “super-mighty preemptive strike.”

Trump hosted Chinese President Xi Jinping at his resort in Florida earlier this month and, while taking a hard line with North Korea, has focused his efforts on trying to convince China to put more pressure on its ally and neighbor.

However, Trump has also ordered what he has described as an “armada” to waters off the Korean peninsula as a warning to North Korea. There was some confusion about the whereabouts of the USS Carl Vinson aircraft carrier strike group earlier this week.

While it was thought the carrier group had been steaming towards the Korean peninsula, it had in fact been completing a training exercise with the Australian navy.

Pence said the carrier group was now expected to be in waters off the Korean peninsula before the end of the month, “within days.”

On Friday, the U.S. Navy said a pilot from the USS Carl Vinson had ejected safely while conducting a routine flight south of the Philippines.

In the face of the U.S. moves, North Korea said on Friday the state of affairs on the Korean peninsula was “extremely perilous.”

The North will celebrate the 85th anniversary of the foundation of its Korean People’s Army on Tuesday and has marked important events in the past by launching missiles or conducting nuclear tests.

South Korea’s Unification Ministry spokesman Lee Duk-haeng said on Friday all those military exercises meant there was a lot of military equipment gathered in North Korea, as well as the South.

Satellite imagery analyzed by 38 North, a Washington-based North Korea monitoring project, found some activity underway at North Korea’s Punggye-ri nuclear test site, but the group said it was unclear whether the site was in a “tactical pause” before another test or was carrying out normal operations.

U.S. officials have also said there was an increased level of activity by Chinese bombers, signaling a possible heightened state of readiness. Russian media has denied reports Moscow was building up its forces near the Korean border.

“Now that we possess mighty nuclear power to protect ourselves from a U.S. nuclear threat, we will respond without the slightest hesitation to full-out war with full-out war and to nuclear war with our style of nuclear strike, and we will emerge the victor in the final battle with the United States,” the North’s Foreign Ministry said in a statement.