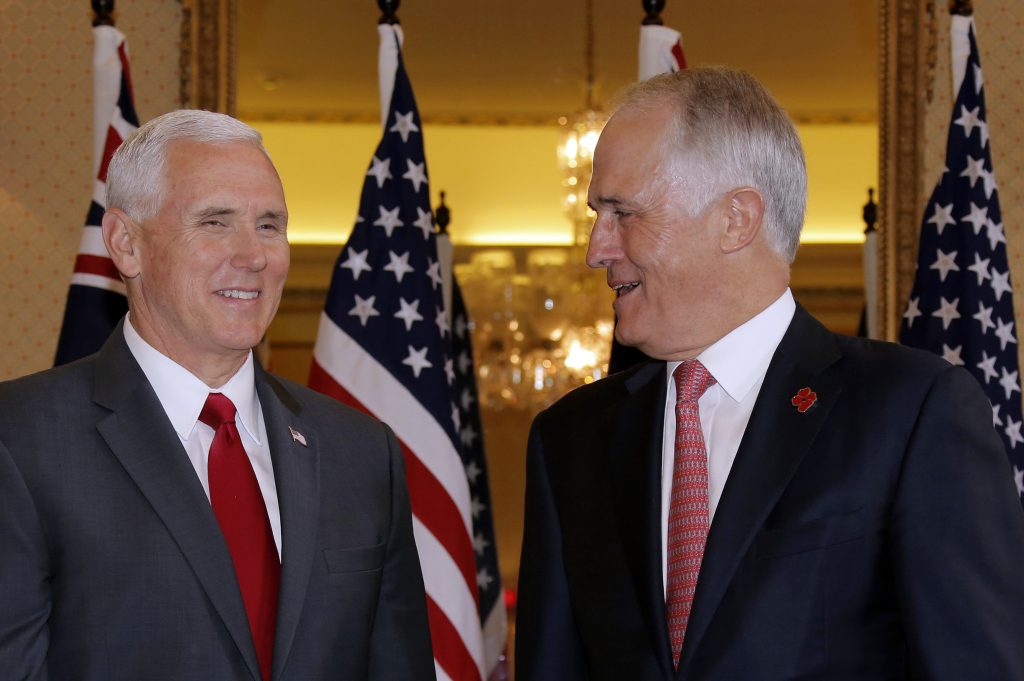 U.S. Vice President Mike Pence and Australia’s prime minister swept aside any lingering tensions Saturday over an Obama era agreement on the resettlement of refugees, joining forces to urge China to take a greater role in pressuring North Korea to scuttle its nuclear weapons and missile program.

Pence and Prime Minister Malcolm Turnbull repeatedly praised the decades-long American-Australian alliance following a meeting in Sydney, with the vice president passing along President Donald Trump’s “very best regards” and thanking Turnbull for calling on Beijing to be more assertive in the international effort to de-escalate Pyongyang’s nuclear threat.

Meeting at the governor-general’s residence with sweeping views of Sydney Harbour and the city’s famed opera house, the two leaders appeared at pains to present a united front following an unusual period of strain between the longtime allies. The anxieties were sparked by a spat between Turnbull and Trump over a refugee resettlement deal struck by former President Barack Obama.

Pence said Saturday that the U.S. would honor the agreement even if the administration didn’t agree with it. Under the deal, the U.S. would take up to 1,250 refugees housed by Australia in detention camps on the Pacific island nations of Nauru and Papua New Guinea.

Trump’s anger over the agreement led to a tense phone call with Turnbull in January and an angry tweet in which the president called the deal “dumb.”

“President Trump has made it clear that we’ll honor the agreement — that doesn’t mean we admire the agreement,” Pence said during a joint news conference with Turnbull.

The prime minister, for his part, said that “whatever the reservations of the president are,” the decision “speaks volumes for the commitment, the integrity of President Trump, and your administration, sir, to honor that commitment.”

The fallout over the deal has strained the typically cozy alliance between the U.S. and Australia. A majority of Australians view Trump unfavorably, and some critics of him have urged Australia to distance itself from the U.S. in favor of stronger ties with China. Turnbull has resisted pressure to choose between the two countries, both of which are considered vital allies; the U.S. is Australia’s most important security partner, while China is its most important trading partner.

Pence’s visit Down Under, part of his 10-day, four-country trip to the Pacific Rim, was widely viewed as an effort to smooth over relations with Australia. Indeed, the vice president seemed determined to reassure Australia of its importance to the U.S., noting as he stood next to Turnbull on the shores of Sydney Harbour: “It’s always heartening to stand beside a friend, and I do so today.”

Both leaders also repeatedly cited the nations’ long history of military cooperation. Australia has fought alongside the U.S. in every major conflict since World War I, and is one of the largest contributors to the U.S.-led military campaign in Iraq and Syria.

Pence said his trip to Australia during the administration’s first three months in office and Trump’s plans to travel to Asia next fall represented “a strong sign of our enduring commitment to the historic alliance between the people of the United States of America and the people of Australia.”

Pence and Turnbull said they were aligned in their opinion that China should use its leverage with North Korea to de-escalate the nuclear threat from Pyongyang. Pence said the U.S. believes that it will be possible to achieve its objective of ending North Korea’s nuclear program peacefully, largely with the help of China.

Turnbull echoed the sentiments, saying: “The eyes of the world are on Beijing.”

Pence said that while the Trump administration had pulled out of the Trans-Pacific Partnership, it still considered its bilateral trade deal with Australia to be a “model” and a “win-win” for both countries.

The alliance was front-and-center for Pence in his meetings with top Australian officials, who repeatedly noted their military partnership for nearly a century. Governor-General Peter Cosgrove, seated with Pence, said the relationship between the countries is as strong as it was since “the first time we saw each other on the battlefield in 1919.”

Pence was using the visit to make a number of cultural stops, joining with Foreign Minister Julie Bishop at the Australian Museum, observing exhibits on crocodiles and snakes and listening as one of the museum’s managers offered a traditional Highlands welcome of Papua New Guinea.

On Sunday, Pence and his family were to tour Sydney’s iconic Opera House, take a boat ride in the harbor and visit the city’s Taronga Zoo.