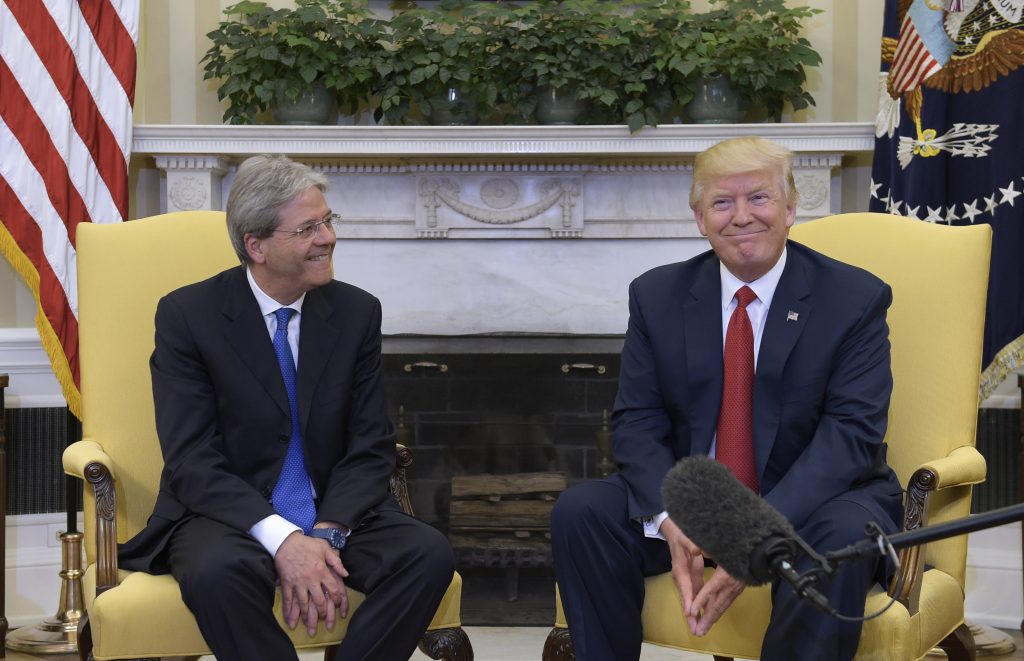 Iran is failing to fulfill the “spirit” of its nuclear deal with world powers, U.S. President Donald Trump declared Thursday, setting an ominous tone for his forthcoming decision about whether to pull the U.S. out of the landmark agreement.

As he often had during the president campaign, President Trump ripped into the deal struck by Iran, the U.S. and other world powers in 2015 and said “it shouldn’t have been signed.” Yet he pointedly stopped short of telegraphing whether or not the U.S. would stay in.

“They are not living up to the spirit of the agreement, I can tell you that,” President Trump said of the Iranians, though he did not mention any specific violations. Earlier this week, the administration certified to Congress than Iran was complying — at least technically — with the terms of the deal, clearing the way for Iran to continue enjoying sanctions relief in the near term.

On Iran, Trump and his top officials have been walking a narrow line as they seek to show an aggressive stance. While disparaging the nuclear deal and accusing Iran of fomenting violence and terrorism throughout the Middle East, President Trump has avoided committing to abandon the agreement, a move that would be staunchly opposed by U.S. businesses and European allies.

Yet the president seems keenly aware that his indecisiveness about the deal’s future is a step back from his campaign declaration that as president he would rip it up or renegotiate.

He said of Iran, “I think they are doing a tremendous disservice to an agreement that was signed.”

Under the deal, brokered during the Obama administration, Iran agreed to roll back key aspects of its nuclear program in exchange for relief from certain economic sanctions. Critics have said it’s unfathomable that the U.S. would grant sanctions relief to Tehran even as it continues testing ballistic missiles, violating human rights and supporting extremist groups elsewhere in the Middle East.

By design, the nuclear deal does not address those Western grievances, meaning that Tehran can be in compliance even as it violates U.N. resolutions and remains a U.S.-designated state sponsor of terrorism. The U.S. has continued to punish Tehran for those activities with non-nuclear sanctions that also fall outside the purview of the deal.

President Trump hasn’t given a timeline for when his administration’s review of Iran policy — including whether to stick with the deal — will be complete. But the U.S. must decide next month whether to renew a waiver so that Iran can continue receiving sanctions relief.

The president joined Italian Premier Gentiloni for a White House news conference at a tense time for Europe, which was reeling anew from a deadly attack in Paris on Thursday ahead of a pivotal presidential vote in France on Sunday. The French election is being seen as a bellwether for whether the move toward nationalism and separation from the European Union, displayed by Britain’s move to leave the EU, will continue spreading to other European countries.

President Trump didn’t specifically weigh in on the French election, nor would he say outright whether he supported countries staying in the EU. But he said a strong Europe is “very, very important” to the United States.

“We will help it be strong, and it’s very much to everybody’s advantage,” President Trump said.

Weeks after he said he was moving on after a failed attempt in Congress to replace the Affordable Care Act, President Trump said “there’s no give-up” and predicted a proposed GOP overhaul of Obama’s health-care law was gaining popularity.

And, with a funding deadline looming to keep the government running, President Trump said it was possible Congress would manage to accomplish it all next week or “shortly thereafter.”

Grappling with other national security concerns, President Trump said he did not see a role for the U.S. in Libya, adding that the U.S. “has right now enough roles.”  President Trump has criticized the Obama administration for a 2011 military intervention that he says created a power vacuum that led Libya to slip into chaos.

President Trump also voiced optimism that the U.S. had successfully enlisted China to try to persuade North Korea to give up its nuclear weapons program.

“We don’t know whether or not they’re able to do that, but I have absolute confidence that he will be trying very, very hard,” President Trump said, referring to Chinese President Xi Jinping.