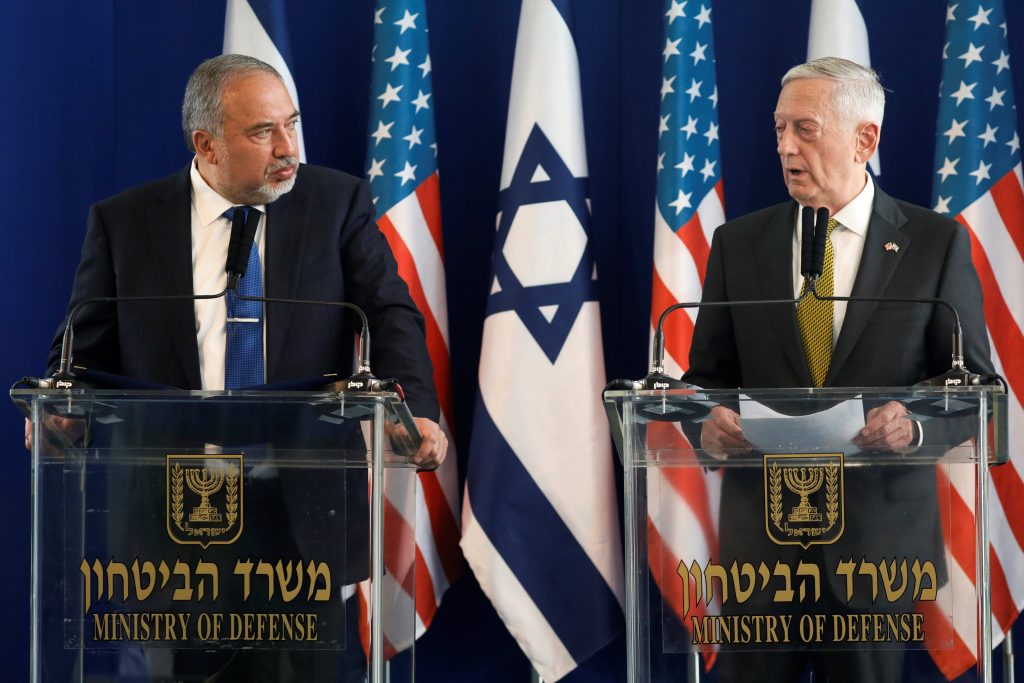 Speaking at a news conference in Tel Aviv alongside Israeli Defense Minister Avigdor Lieberman, Mattis also said that the Syrian Air Force has dispersed its combat aircraft in recent days. The implication is that Syria may be concerned about additional U.S. strikes following the cruise-missile attack earlier this month in retaliation for alleged Syrian use of sarin gas.

“There can be no doubt in the international community’s mind that Syria has retained chemical weapons in violation of its agreement and its statement that it had removed them all,” said Mattis. He said he didn’t want to elaborate on the amounts Syria has in order to avoid revealing sources of intelligence.

“I can say authoritatively they have retained some,” said Mattis. “It’s a violation of the United Nations Security Council resolutions and it’s going to have to be taken up diplomatically and they would be ill-advised to try to use any again – we made that very clear with our strike,” he said.

Israeli defense officials said this week that Syria still has up to three tons of chemical weapons in its possession. It was the first specific intelligence assessment of President Bashar Assad’s weapons capabilities since the deadly chemical attack earlier this month.

Liberman also refused to go into detail but said, “We have 100 percent information that (the) Assad regime used chemical weapons against rebels.”

Assad has strongly denied that he was behind the attack in the opposition-held town of Khan Sheikhoun in Syria’s northern Idlib province, and he has accused the opposition of trying to frame his government. Top Assad ally Russia has asserted that a Syrian government airstrike hit a rebel chemical-weapons factory, causing the disaster.

In response to the April 4 attack, the United States fired 59 missiles at a Syrian air base that it said was the launching pad for the attack.

Before meeting with Mattis in Yerushalayim, Prime Minister Binyamin Netanyahu told reporters that Israel is encouraged by the change of administrations in Washington.

“We sense a great change in the direction of American policy,” Netanyahu said. He referred to the U.S. cruise-missile strike in Syria as an important example of the new administration’s “forthright deeds” against the use of chemical weapons.

A few hours later, sirens wailed on the Israeli side of the Golan Heights, warning of incoming rockets from Syria, the Israeli military said. It said that three “projectiles” were fired and that no injuries were reported.

Israel has been largely unaffected by the Syrian civil war raging next door, suffering mostly sporadic, mostly spillover, incidents of fire. Israel has occasionally responded to fire with limited reprisals on Syrian positions.

Israel has also carried out a number of airstrikes on suspected weapon convoys that it believed were destined for the Lebanese terror group Hezbollah. Israel has warned against “game-changing” weapons reaching Hezbollah in Lebanon from Syria, which supports Hezbollah. Hezbollah fired more than 4,000 rockets on Israeli communities in the 2006 war, while Israel bombarded Hezbollah targets in southern Lebanon.

Last month, Israel shot down an anti-aircraft missile fired at its planes as they struck a suspected Hezbollah weapons convoy.

Hezbollah and Iran, both bitter enemies of Israel, along with Russia have sent forces to support Assad.

Syria agreed to give up its chemical-weapons arsenal to avert U.S. strikes following a chemical-weapons attack in opposition-held suburbs of Damascus in August 2013 that killed hundreds of people and sparked worldwide outrage.

Ahead of that disarmament, Assad’s government disclosed that it had some 1,300 tons of chemical weapons, including sarin, VX nerve agent and mustard gas.

The entire stockpile was said to have been dismantled and shipped out under international supervision in 2014 and destroyed. But doubts began to emerge soon afterward that not all such armaments or production facilities were declared and destroyed. There also is evidence that the Islamic State terror group and other insurgents have acquired chemical weapons.