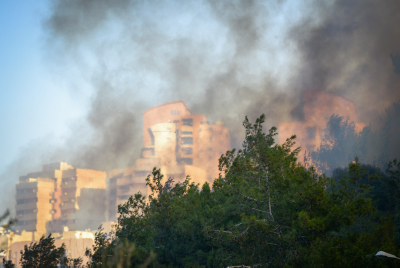 Ninety percent of the fires that took place during the massive fire wave that hit northern Israel last November were started deliberately, according to Ran Shalef, a top investigator for the fire department. In a recent interview, Shalef said that “the arson wave was indeed a terror wave. There can be no doubt about it. All of the towns and settlements that were burned were Jewish, and all the people who arrested in connection with the fires were Arabs. Nowhere else in the Middle East, which underwent the same dry, hot spell we did, was there a similar wave of fires.”

Israeli firefighters were forced to battle hundreds of blazes that broke out throughout the country, with Haifa the worst victim. Some 750 homes and apartments were destroyed in the fires that hit five areas of the city, local officials said, with hundreds more in danger of collapse due to weakened infrastructure caused by fire damage. Thousands of dunams of forest growth inside and outside the city were burned to the ground, and over 60,000 people were evacuated from their homes.

Although the investigation into what caused the fires is still ongoing, media reports have indicated that the majority of fires were circumstantial, and not caused by arson. However, said Shalef, this impression is incorrect; in reality, investigators have determined that arson was the cause of most of the fires. “There is definitely agenda-setting by the media in reporting on this. I can prove to anyone that what I am saying is true, so that even an ignorant fool will understand what went on.

“I am a professional, and I represent a professional point of view,” he added. “I am not interested in the media’s agenda. While there were definitely exceptions, the general picture is clear, and that picture indicates that Israel was subjected to a wave of terrorist arson last November.”