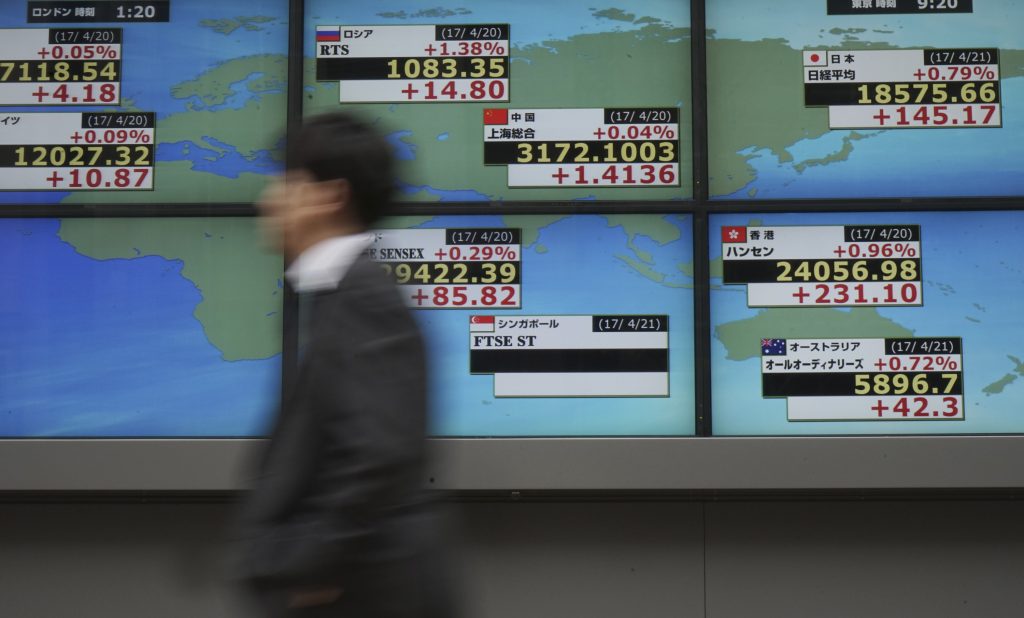 Asian stocks rose Friday ahead of the first round of voting in France’s closely watched presidential election, after Wall Street rallied on strong corporate earnings.

“With the French elections bearing down on markets, the bulls seem to be wrestling back some control here and despite the prospect of real volatility on Monday, there is hope that all will be well,” said Chris Weston of IG in a report. “Having pared back expectations around the issue to a minimum, some have even bought into the idea that perhaps U.S. tax reform could be on the cards.”

French voters choose among 11 candidates Sunday in the first round of a presidential election that has left the country and financial markets on edge, especially after a shooting on Paris’ Champs-Elysees Boulevard Thursday that killed a police officer and wounded three other people. The Islamic State terror group claimed responsibility for the attack.

Prominent contenders in the race include populists Marine Le Pen and Jean-Luc Melenchon, who both say they want to tear up agreements that bind together the 28 European Union nations. Others include François Fillon, a conservative former prime minister, and Emmanuel Macron, a former banker and economy minister.

U.S. Treasury Secretary Steven Mnuchin, speaking at an IMF event, said the Trump administration’s plan for tax changes will come “very soon.” Mnuchin’s goal of getting it passed by Congress’s August recess has slipped. He said the administration still hoped to get a measure through Congress well before the end of the year. Mnuchin is also working on proposals to overhaul regulations put in place by the Dodd-Frank Act passed after the 2008 financial crisis. He said he would have a report with recommendations for the president ready by June that would address major issues in changing the law.

Benchmark U.S. crude gained 2 cents to $50.73 per barrel in electronic trading on the New York Mercantile Exchange. The contract shed 14 cents on Thursday to close at $50.71. Brent crude, used to price international oils, added 3 cents in London to $53.02. It rose 6 cents the previous session to $52.99.