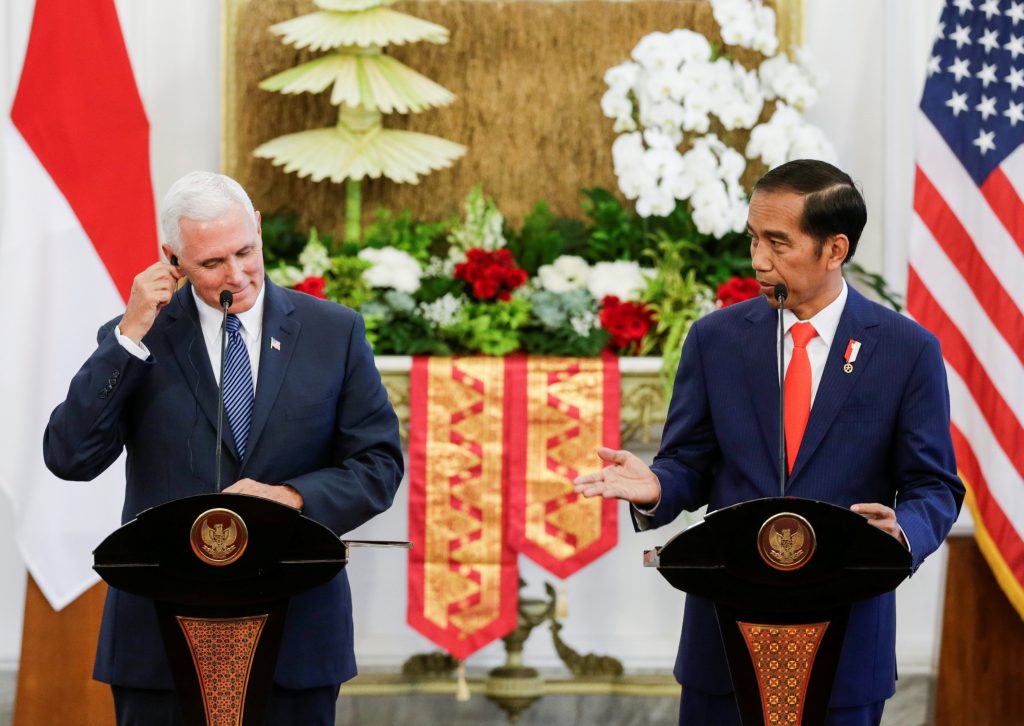 Vice President Mike Pence said on Thursday his administration wants fairer trade with Indonesia, as Washington reviews a number of countries with which it has trade deficits.

Indonesia is one of 16 countries under review for having a trade surplus with the United States.

Official data from Indonesia’s Trade Ministry puts total trade between the two countries at $23.44 billion in 2016, with Indonesia recording a surplus of $8.84 billion. Indonesia mainly exports textiles, footwear and seafood and mainly imports aircraft, machinery and soybeans from America.

Pence also called for cooperation on fighting terrorism and maintaining freedom of navigation in the region.

Pence arrived in Jakarta late on Wednesday from Japan where he reassured Tokyo of a U.S. commitment to rein in North Korea’s nuclear and missile ambitions.

Washington had billed Pence’s visit to Jakarta as a booster for a strategic partnership between the world’s second- and third-largest democracies, but a raft of bilateral disputes with U.S. companies could sap the goodwill from his trip.

Over the past six months, Indonesia has wrestled with mining giant Freeport McMoRan, demanding the company divest 51 percent of its shares in its Papua-based gold and copper mines, and has demanded that Google Inc. settle unpaid taxes of more than $400 million. Jakarta also deleted JP Morgan from its list of primary bond dealers after what was deemed a negative research report.

Google declined to comment for this report and JPMorgan did not respond to a request for comment.

Freeport Indonesia spokesman Riza Pratama said, “This visit is happening entirely independent of our current negotiations with the government of Indonesia.”

However, billionaire investor Carl Icahn, Freeport’s third-biggest shareholder and special adviser to U.S. President Donald Trump, has described Jakarta’s tactics over the mining contract as “disingenuous and insulting,” according to the New York Times.

As leader of the world’s most populous Muslim nation, Widodo has voiced worries about Trump’s immigration policy, which critics say is biased against Muslims.

Pence is visiting Indonesia a day after the Indonesian capital Jakarta elected a new Muslim governor who rode a wave of conservative Islamist to defeat an incumbent Christian on trial charged with blasphemy against the Koran.

Widodo’s approach to foreign policy has been led more by economic interests than geopolitical considerations: He has pursued increased trade and investment from China but keeps a diplomatic distance from Beijing and established a strategic partnership with Washington under former President Barack Obama.

Widodo said at the joint news conference with Pence that the two countries would “increase the strategic partnership… which will focus on cooperation and investments.”

He said over the next month the two sides will form a team to discuss the “management of bilateral trades and investment based on the principle of a win-win solution.”