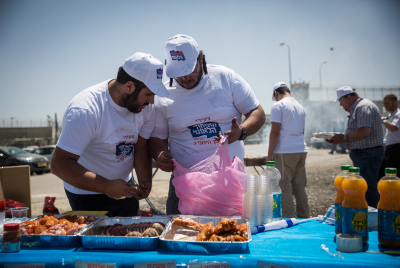 As hundreds of Arab terrorists maintained their hunger strike for a fourth day, young members of the right-wing Ichud Haleumi (National Union) party – currently a faction in Jewish Home – decided to help them “celebrate,” by holding a barbecue outside the gates of Ofer Prison outside Jerusalem, where many security prisoners are housed.

About 75 members of the group set up portable barbecues and cooked up a variety of Israeli “on the grill specialties,” including kebabs, grilled schnitzel, hot dogs and burgers. The idea, according to organizers, was to help the Arab terrorist prisoners to fulfill their hunger strike to the letter of the law, by helping them to smell the food that they were denying themselves. Police let them cook for about 45 minutes before asking them to leave. In response, the activists offered the officers some lunch, which they gladly accepted before shooing the protestors away.

Yediot Acharonot reported that the terrorists have 13 demands, including better and more food, more visits with relatives, and more visits from international medical groups like the Red Cross, which the terrorists are demanding be allowed to visit them twice a month. Most significant for them, security officials say, is the demand that public phones be installed in prisons to allow terrorists to contact families. Representatives of the terrorist prisoners say that the phone calls would not entail a security risk, as they would be monitored by Israel. The entire impact, they say, would be “humanitarian.”

Also critical to the terrorists, a source involved in the discussions said, was the increase in the length of a visit with relatives from 45 to 60 minutes, and allowing all first- and second-degree relatives to visit even if they have been convicted of terror activity. Currently, such visitors require a special permit. The sources said that the prisoners are willing to compromise on all their demands, except for the phones and the visitations.

In response, prison officials have been moving “high-profile” prisoners who are accused of instigating the hunger strike to different units, and withholding rights from prisoners who continue with the hunger strike. Among the prisoners who have been moved from their regular cells is archterrorist Marwan Barghouti, responsible for the direct and indirect death of dozens of Israelis in terror attacks. He was moved to solitary confinement, and officials did not say when he would be moved back to his regular cell. So far, no riots have been reported, but officials are keeping a close eye on the situation.